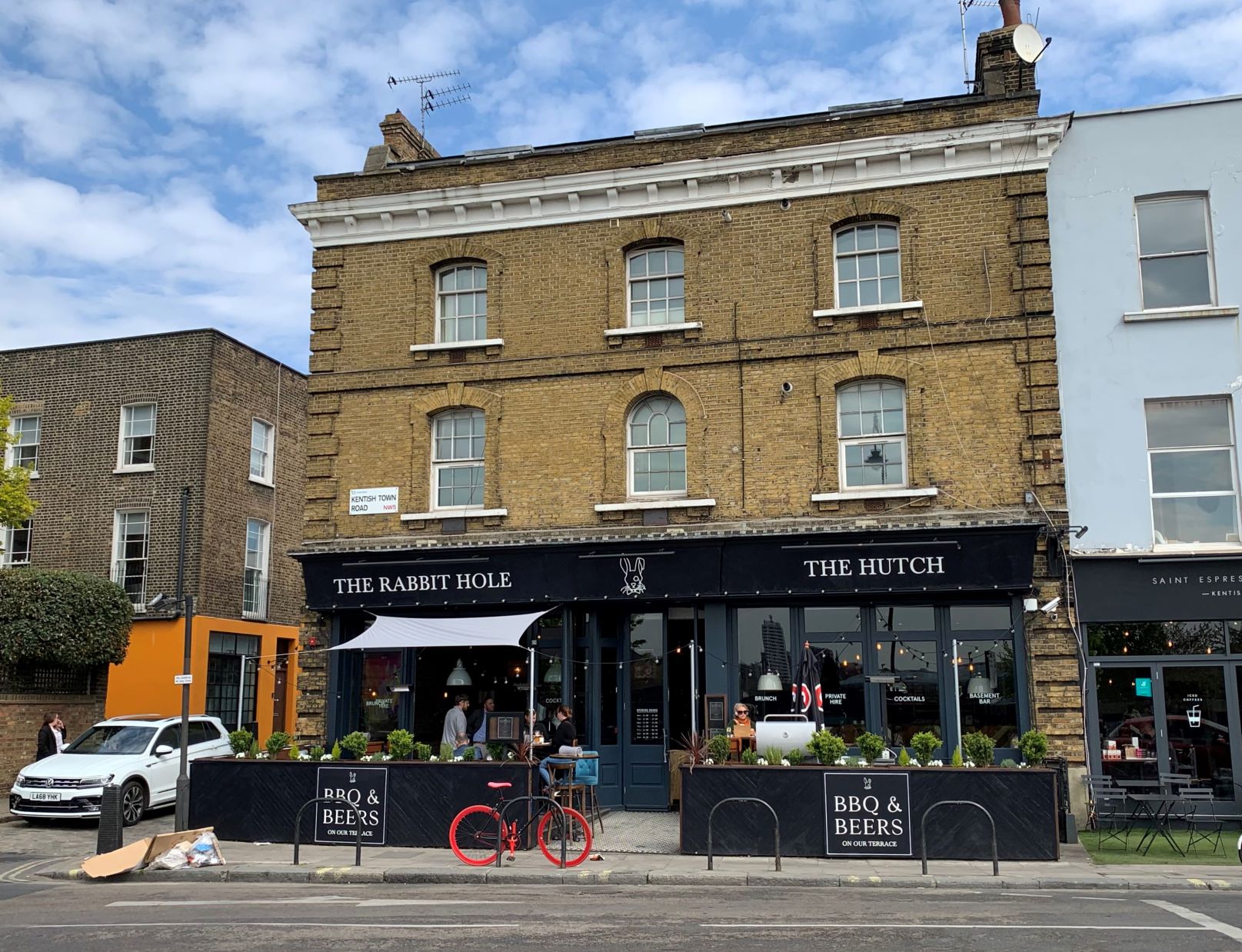 You have to agree it’s looking pretty good right now, isn’t it? But, as longterm readers will know, the newly opened Rabbit Hole is only the latest in a growing line of hospitality businesses who’ve had a shot at Kentish Town’s famed former police station.

But, before we cast our minds back to everyone from Kentish Canteen to Neighbour, what of its older history? The striking landmark was originally built in 1862 to house Y (or Highgate) Division, conveniently located next to the Assembly House, a notorious Kentish Town drinking haunt. Paralytic patrons would have inevitably, from time to time, ended up in one of four police cells under the street (now both the Rabbit’s forthcoming cocktail bar and neighbouring speakeasy Knowhere Special).

However, its history goes back further still. The Y Division police station replaced a row of cottages bequeathed to the poor by merchant John Morant way back in 1547.

The current building took the north side of a large cobbled yard which can still be seen in nearby Leverton Place, but by 1896 the police HQ had moved out to Holmes Road, a location you’ll no doubt be familiar with.

By the mid 20th Century the original space had become residential and the cells were used as coal depots, then converted in 1970s into two shops (including Ace Sports, now further up the street on Fortess Road). The 1990s saw it become Spanish restaurant Triñanes – with controversial 4am licence.

Which brings us to the mid-noughties, when the building was taken on by likeable butcher Harry (of nearby Harry’s Fine Foods fame) and became the briefly notable Cafe R.E.D (which stood for Really Excellent Dining – no, really).

When the restaurant stumbled it remained boarded up for what seemed like ever (a year or two, anyway). But by November 2010 the site had been reinvented as the Kentish Canteen.

Kentish Canteen was revolutionary in opening the door to the flurry of brasserie-style contemporary businesses that have flooded the area since. The decor was airy and light, with pendant lighting, booths and a laidback New York-vibe, while a counter heaved with Ottolenghi-style salads and pastries. On one wall arty black and white pictures of Kentish Town encouraged local pride and a sense of identity – an act in itself which seemed slightly daring.

The opening has a special place in the history of Kentishtowner, too. Impressed by an impromptu visit, and proud of what seemed a smart new opening on a boarded-up stretch, I hastily wrote a hundred words and created a blog to publish it. And so Kentishtowner was born.

By far the most successful incarnation, the Canteen finally closed at the end of 2014. And at that point, its basement cocktail bar Shebeen – unbelievably then still a relatively new thing for Kentish Town – was jumping on a Friday night, its former arched police cells now repurposed as cosy booths.

From spring 2015 the site was occupied by Joe’s Southern Kitchen, the least successful of its recent incarnations with its more generic take on hipsterish fried chicken, before launching in summer 2017 as Neighbour, a restaurant initially offering seasonal food and upmarket wines. By 2018 they had rethought the imaginative small plates (which we really rated) into a more predictable posh burger menu.

But despite the owners being the extremely in-the-know Urban Pubs And Bars – the Londonwide group behind Paradise By Way Of Kensal Green and the acclaimed Salt Yard Group of restaurants – they pulled out swiftly this year before lockdown eased.

Fast forward to spring 2021 and, with only terrace-dining currently allowed, new St Albans-based owners the Rabbit Hole are, it seems, all about the BBQ, with a menu offering teriyaki cod, vegan falafel and the usual meaty suspects like a wagyu beef or lamb burger. The cost is a tenner for a box with a side (salad, slaw, hummus). But as residents know, of course, it’s that lovely pavement sun-trap terrace, with its awesome sunset views, that’s the real attraction.

So, the question is: will this latest incumbent make the historically transient site work once and for all? There’s only one way to find out: hop on down that Hole.

Thanks to Camden History Society.