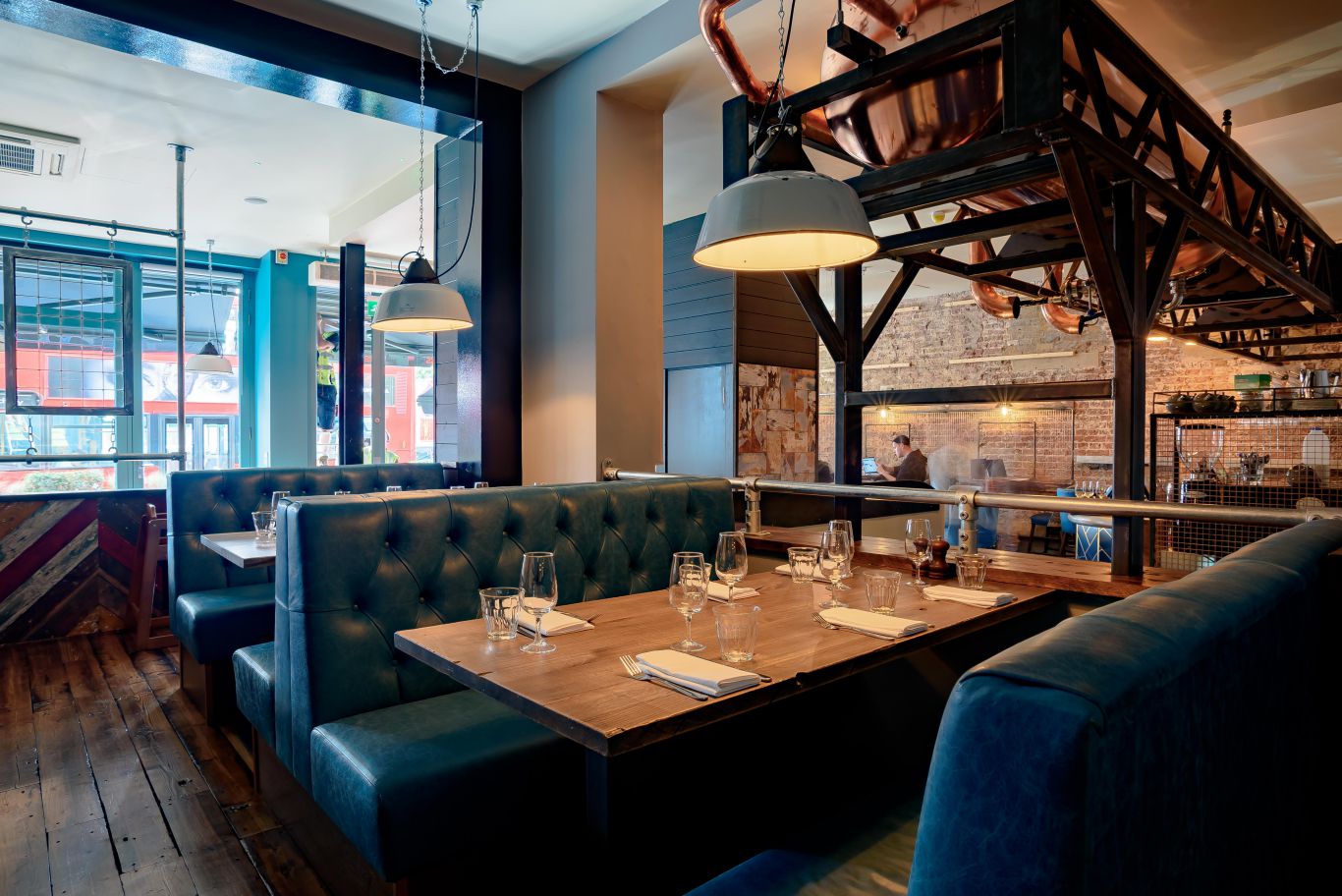 This landmark former police station has seen them come and go: before the fleeting Joe’s Southern Kitchen was the friendly Kentish Canteen, which survived over half a decade. Now its all-day brasserie formula has been revived and updated by new occupants Neighbour.

Its name casting a nod at what the owners call the “vibrant social community on its doorstep”, the idea is that it’s as flexible for a sharing plate on the way home (or before a gig) as it is for a slap-up evening out. Well, that makes sense, doesn’t it?

With that in mind, the room to the left, as you enter, is now a casual drop-in bar, with raised high tables and chairs. And on the right is the dining room, chopped up into booths and tables and areas separated by glass and railings. There are pendants offering the right level of lighting (ours doesn’t work, for which the waiter apologises profusely) and a white-tiled back wall. Inevitably the bare-brick industrial feel is a bit Shoreditch, a bit NYC – but then, isn’t everywhere nowadays?

As we sit down, the waitress is enthusiastic and friendly; the place only opened a week or two ago and there’s a genuine energy amongst the team, she tells us. She proclaims the olive oil, accompanying deliciously spongey sourdough, the best we’ll ever taste, although she’s not then sure where it’s from. After asking a couple of colleagues, it’s revealed as Spanish. And she’s right: it’s a good curtain-raiser.

The menu, created by head chef Marek Krystal – previously of The Grove Ealing, where he earned an AA Rosette – riffs on small plates, with half a dozen mains to balance things out. We opt for a sensible mix of the two. “The food may take a while,” warns the server – and yet the wait’s not too bad at all, especially as the room’s almost full. But yes, we appreciate the heads-up.

The first thing we notice when the food comes is the plates: earthenware, misshaped and vogueishly beautiful. The dishes that follow are really a modern-day reboot on the Kentish Canteen’s solid of-its-time cooking. By the point we’re scoffing the chocolate and salted caramel torte, and polishing off a light, young French pinot noir (£26), the orange-red glow of the sunset is visible beyond the railway tracks. A perfect time, then, to contemplate the finest dishes consumed over the course of the evening.

This is sublime, and our #1 must-try: beef thigh, cured for 30 days, melts slowly over the tongue, aided by the salty hit of capers, tang of pickled cucumber and umami-heavy dabs of anchovy sauce. Crisp cubes of crouton provide crunch: it’s a deconstructed beef tartare with bells on, all no-messing texture and taste.

Nowadays everything looks like a painting on a plate, doesn’t it? And our other starter is a stunner, its skin crisp, flesh buttery (apart from a couple of rogue pinbones, which could have easily been removed). It sits on a sweet burnt apple puree, with mildly fiery grated horseradish, and the mellow earthiness of heritage beetroots.

Served on an attractive shell-style platter is a golden-coated jumble of bright rosy flesh, vivid peas, salty pancetta, charred baby gem and Jersey royals. Individually there’s nothing especially brilliant about the ingredients, but layer a bit of each on the fork and – pow! – flavourbomb ahoy. A side of kale and harissa is a tad oily, mind.

This “special” cut of Iberian pork, located between the shoulder blade and loin, comes from posh acorn-fed black porkers who roam freely in the Iberian meadows. It’s one of the juiciest and most flavourful (not to mention priciest) parts, and far superior to the pork historically found on menus in the UK. Served in blushingly pink slices, it’s a blissful match for chunky romesco, the classic Spanish sauce made with roasted red peppers, almonds, tomatoes and bread. And a simple charred spring onion offsets the richness nicely.
This is box title
Small plates from £4, larger plates from £14. Neighbour is open daily at 300 Kentish Town Road NW5. Jukes cocktail bar downstairs till 12:30pm nightly. More info here