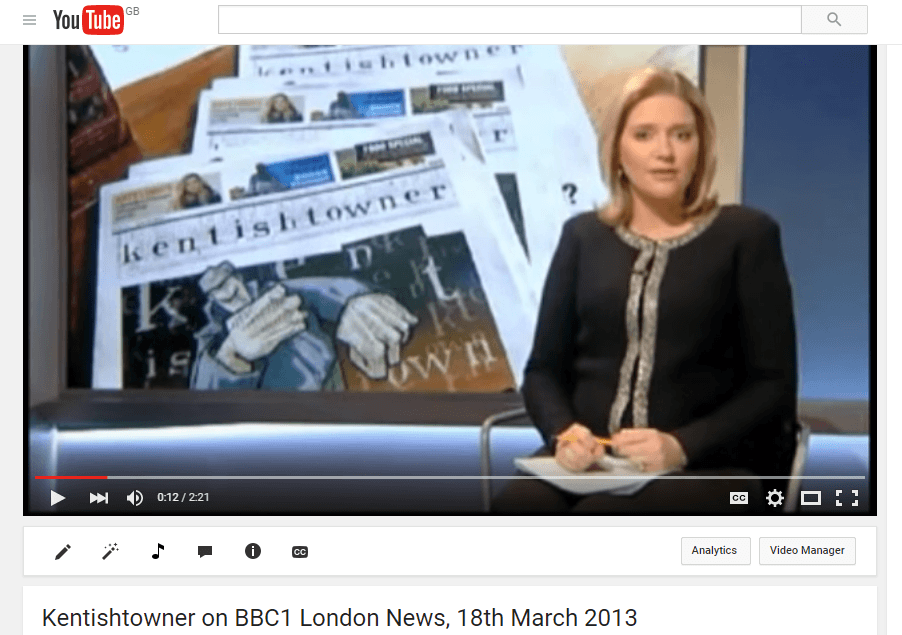 Kentishtowner at 10: a decade celebrating hyperlocal

It's been ten years since our first tentative blogpost. Here's what happened since

It’s hard to believe it’s ten years since I started an irreverent little blog on the (mostly food-based) comings and goings in NW5.

At the time I was writing a novel (yup, signed up to an agent and everything), while freelancing for The Guardian and other broadsheets.

And yet I was easily distracted. Deciding one evening to pen a brief, rather underwhelming review of Kentish Canteen, newly open on the site where Neighbour now stands, I hit upon a name I immediately quite liked: Kentishtowner. It had a nice ring to it. And yes, the domain name was available. Well, it was November 2010, after all.

Getting a taste for the project, I hurriedly published several other short reviews of local cafes and pubs – which were inconsequential enough to be ignored by anyone and everyone. I decided I needed an angle, a character, someone who could give the blog a voice: and so the fictional Mrs Kentishtowner was born.

For the uninitiated, the colourful Mrs Kentishtowner proceeded to sweep around the postcode making various pronouncements about whatever she encountered. She soon won a fanbase amongst locals, casting her judgement over everything from the wallpaper at the Dartmouth Arms to the ill-advised curtains at the Lion & Unicorn. In fact, she built up the readership which became the basis of the title you know today. And even better, most people thought she actually existed.

With a cult following in place, I was promptly told by everyone I knew that I somehow should try and “monetise” it. Yet I didn’t have a clue how. It was only when I ran into an old work-related acquaintance, Tom Kihl, who professed to be a fan, that we both decided to take a punt on relaunching my little blog as “North London’s daily cultural guide.”

This finally happened in January 2012. With the feisty Mrs Kentishtowner taking a backseat – if that’s indeed possible for a fictional character – we broadened our remit. Emphatically a “good news title” (not the traditional local paper as many people still believe) we agreed to focus on the subjects we enjoyed writing about: food, drink, community, lifestyle, the arts, travel and people. And my partner created the distinctive logo, which still stands.

The gamble paid off. As well as a rising audience, advertising and sponsorship revenue, that summer we won funding from innovations charity Nesta, were shortlisted twice in the Newspaper Awards and launched an online shop with a range of t-shirts and bags.

The national press picked up on it too with features in many titles from the Independent to Metro – and even a profile in the Sunday Times. The most surreal moment was making it onto the BBC 1’s Six O’Clock news after launching our first print edition (see pic below) in February 2013. But it was, of course, fantastic publicity – the papers were free for anyone to pick up at Overground stations, bars, pubs, libraries, art galleries and independent shops.

Things grew further for our newly formed publishing house London Belongs To Me (named after the Saint Etienne song) over the next few years. Two more titles were launched: Gasholder – also in print – aimed to channel the excitement being generated around King’s Cross at the time, with its intense redevelopment; and Below The River, whose aim was to document south London. Leytonstoner was next in Jan 2015, its singular remit to cover the entire patch of east London east of Hackney – which also just seemed to be the area where everyone we knew was now moving.

Soon we had eight titles across the capital and beyond, including popular travel site Weekendr, and bespoke magazines such as Eustontowner and St James’s Correspondent. Four were in print, two monthly and two quarterly. We expanded our staff and contributors base, with offices at the newly launched LABS in Camden.

And then – because what goes up will always come down – things stumbled somewhere around the end of 2018. When a paper is free, while it can seem powerfully ubiquitous to its audience, print advertising is still hard to come by, with some bigger brands cautious and smaller local businesses unable to spare any cash. As many independent publishers have found before us (and of course since), everyone wants to be featured editorially, but not so many either can or wish to pay, for whatever reason – so while audiences remain strong, the business model can quickly flounder.

Despite tens of thousands of readers and social media followers, print finally proved unsustainable, with monthly issues stopping in August 2019, and Covid further paralysing everything for us as well as so many other independents. 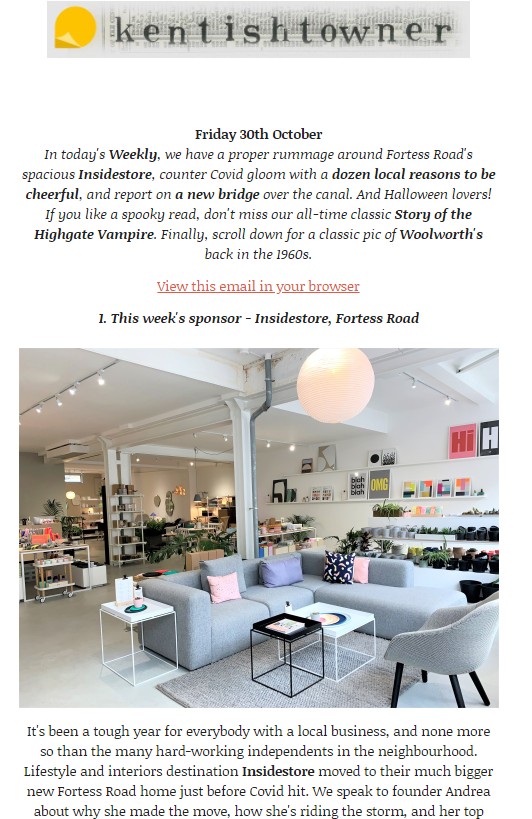 Fast forward to autumn 2020 and Kentishtowner, a little shaken up, is still here, in somewhat different shape, now published online only – on a necessary shoestring.

Happily the key titles in the family – including Gasholder, Leytonstoner and Weekendr – all have maintained their audiences, especially with the lockdowns and their emphasis on all things local.

Our popular Weekly newsletter editions (see the image above, or recent issues here) are now the key editorial focus, thankfully sponsored regularly by businesses, both local and national, who see the value in passionate local communities. In the midst of the pandemic, we can probably all agree that our communities and local environments really are everything.

So will Kentishtowner even be here in ten months, let alone ten years? Time will tell. But a big thanks to anyone who has read us, whether for a month, a year or the whole decade.

And a small birthday plea: if you would like to help sustain our future a small donation to our DonorBox would be invaluable . And, if you haven’t subscribed to the newsletter, please do so here as a growing audience really helps us continue to survive.

It’s beyond tough times for any independent publishing venture at the moment – so I wholeheartedly appreciate your support. Thanks for reading.

If you enjoyed reading this, perhaps you could help out? This month, November 2020, it’s our 10th birthday. But with the sad demise of our free independent monthly print titles due to advertising revenues in freefall, we need your support more than ever to continue delivering cultural stories that celebrate our neighbourhood. Every contribution is invaluable in helping the costs of running the website and the time invested in the research and writing of the articles published. Support Kentishtowner here for less than the price of a coffee – and it only takes a minute. Thank you.