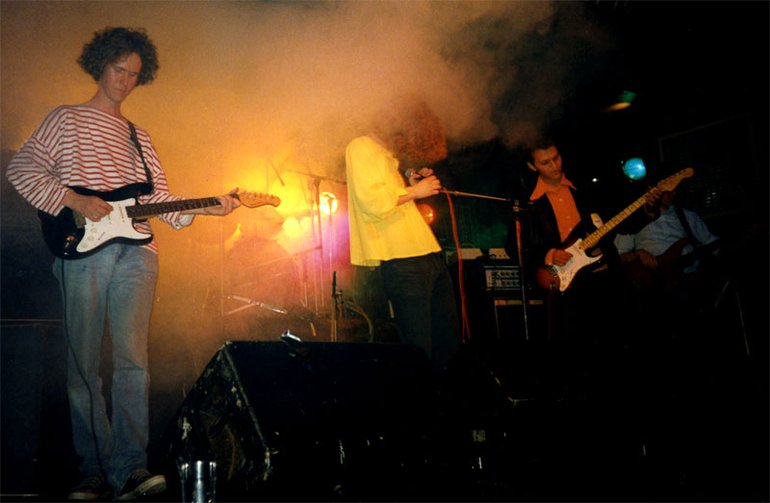 Ricky Gervais managed my band in the 1990s

Back in the early nineties, I was the lead singer in an indie band called The Pointy Birds. Yep, that’s me in the middle, when I had hair – and lots of it.

Like everyone else at the time, we played all the Kentish Town pubs and venues – the ‘toilet circuit’ of the Bull & Gate, the Boston Arms, the Barfly and so on – rubbing shoulders with the likes Blur, Suede, Pulp and Radiohead.

But while our contemporaries went on to bigger and better things during the explosion of Britpop, we couldn’t get signed, sold no records and got bottled off stage at our first ever gig.

But we did have one big fan. His name was Ricky Gervais. You might have heard of him? He worked as the Entertainments Manager at the University of London Union. And yes, Ricky became our manager.

There were always two Rickys: one that goofed around playing practical jokes on his mates, laughing hilariously at his own jokes, and a more serious side that was ambitious and focused. His various fictional creations were in gestation during the period he was working at ULU, so he would quite often go into character – it’s easy to see retrospectively that they must have been bursting to get out.

It was quite fun blurring that line between the real him and his fictional characters – the obvious one being David Brent – but the difference was that Ricky is self aware unlike his most famous character. Chapter One in my new book Anoint My Head (How I Failed to Make it as a Britpop Indie Rockstar) kicks off with me meeting Ricky for first time, in fact – but you’ll have to read that to get the full picture (you can below; it’s free). As for the book? It’s what I would call a ‘cover version’ of a true story.

So anyway, I had just graduated from college and found work in an independent record store in Soho called Selectadisc. My job was to file vinyl, CDs and cassettes all day, every day. The days were long, but dreams of imminent stardom kept me going.

It went something like this: I would record a clutch of classic albums and tour the world a few times in my twenties, and then when I turned thirty, I’d write, direct and star in my own hilarious sitcoms and critically acclaimed films—before writing best-selling novels in my forties.

I might do a bit of oil painting and stand-up along the way, too. That wasn’t much to ask, was it? And now with Ricky as our manager, I knew it was only a matter of a time. Ricky was a bit of a joker and actually in a band himself, but he had managed Suede, a band adorning the front covers of all the music press, so when he offered his services, we said yes.

After finishing my shift at Selectadisc, I’d visit him at ULU to plot world domination for The Pointy Birds over pints of lager and packets of crisps, while he kept his students and staff amused and bemused with practical jokes.

The plan was simple – record an amazing demo, that Ricky would pass to Nude Records, as he had done for Suede, and the rest would be rock ‘n’ roll history. And so he got us a day in a Rocking Horse Studios down in Catford where Suede had recorded their Drowners demo.

Then we played a series of gigs to the music industry, including one show supporting Ricky’s band at The Camden Underworld. We also played the ULU summer ball supporting a Queen covers band called Closet Queen that Ricky also managed, plus some outfit called Bouncy Castle, which turned out to be an actual bouncy castle. Our Spinal Tap puppet show moment.

And so, alas the fickle finger of fame stubbornly refused to point in our direction, and we took our leave at the Boston Arms in front of eight people on a wet and windy Monday night in August 1993.

I became a music promoter and had fun putting on bands like Arctic Monkeys, The Killers and Coldplay. I also ran Kentish Town’s finest music venue the Bull & Gate until someone decided that people no longer wanted bands, they wanted triple-fried chips cooked in goose fat instead.

Why have I written a book about being in a band? Primarily to try and work out where we went wrong. And also because we might be one of the only bands in history who didn’t become rich or famous – but had a manager who did.

You could also say that it doubles up as a story of a musical era and documents the rise of some of the decade’s biggest Britpop bands. A a time machine, perhaps, back to the early nineties – a more innocent time maybe – pre-internet, no mobile phones, no pandemic.

So if you’re missing gigs, perhaps this can be the next best thing – as long as you don’t mind the odd out-of-tune guitar and some excruciating inter-song banter along the way.

Anoint My Head – How I Failed to Make it As A Britpop Indie Rockstar by Andy Macleod is available from all digital platforms. Owl Bookshop in Kentish Town are stocking signed copies, too, so go but it there and support a brilliant NW5 institution. You can find out more about the book and read an extract here.

If you’ve enjoyed reading this, perhaps you could help us out? This autumn, Kentishtowner celebrates its 10th birthday. But with the sad demise of our free independent monthly print titles due to advertising revenues in freefall, we need your support more than ever to continue delivering cultural stories that celebrate our neighbourhood. Every contribution is invaluable in helping the costs of running the website and the time invested in the research and writing of the articles published. Support Kentishtowner here for less than the price of a coffee – and it only takes a minute. Thank you.