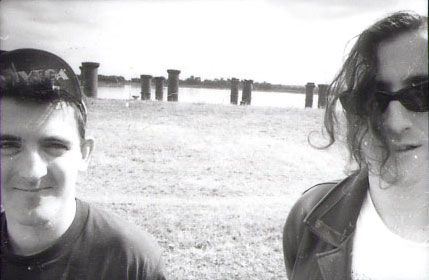 Fruitbat put on the one and only performance of his musical at the Bull and Gate. He hired gold chairs and everybody dressed up in dinner suits and gowns.”

It’s just over a fortnight till the Bull and Gate closes, and I thought it may be time to ponder Carter USM, an almost legendary 90s band synonymous with the venue.

For our younger readers, the duo, formed in the late 80s, divided everyone, with their signature drum machine-plus-guitars-and-noisy-vocals sound, and cartoon monikers Jimbob and Fruitbat. They did enjoy a brief run of success, however, managing a #1 album in 1992 (The ‘Love’ Album); and even in 2013, I still find myself listening to their six minute melancholic masterpiece, Falling On A Bruise (see box below).

“I hadn’t realised quite how many key personal music events had taken place at the Bull and Gate until I started to think about it,” says former leader singer Jimbob. “Jamie Wednesday, the band I was in before Carter, signed our record deal in the dressing room there. My first ever record deal, in fact. Jon Fat Beast was the promoter then and when we played there later with Carter he used to do the lights and would sit in his lighting booth up the top at the back of the venue and heckle us between songs. He even had his own microphone.”

And that wasn’t all. The more Jimbob starts to reminisce, the more associations with the venue he remembers: “Carter held the launch party for our single ‘Rubbish’ at the Bull and Gate. The single’s sleeve artwork was a huge collection of rubbish and junk and the designer recreated it on the stage. Jim’s Super Stereoworld, my band after Carter split, played our debut gig there.

“And Fruitbat put on the one and only performance of his musical at the Bull and Gate. He hired gold chairs and everybody dressed up in dinner suits and gowns. I played an old man in a bank singing about how things were better in the old days.”

But most memorably? “It’s the only venue I can think of,” he says, after a moment, “that you have to enter via the toilets.”

The case for Falling On A Bruise (Watch live video above)

The final track on their breakthrough 1991 album 30 Something was the epic Falling On A Bruise. An existential classic, it’s a song about bedsits, bailiffs, “unworldly” goods, petty crimes – and basically, acceptance.

And yet it somehow transcends its lowly status (in this “no star bed and breakfast”) with brilliant flashes of humour (at one point, JimBob feels like “throwing myself/ off the kitchen shelf”). The refrain, lyrics always playfully overturning convention, is simply: “You win some and you lose some, and you save nothing for a rainy day.”

Unlike some of Carter’s other, noisier songs – say Sheriff Fatman, Bloodsports For All – the symphonic Falling On A Bruise is the one I return to again and again over twenty years later. Its meaning – or rather, ambiguity – seems evergreen, its frank admission of mistakes made in life underscored by this powerful closing line: “I’ve spent my whole lifetime falling on a bruise, and if I had the chance to do it all again I’d change everything.”

Doesn’t that wonderfully go against the sod-you-all rock convention of not caring, of demanding to being accepted for who you are?

“All I really remember about Falling on a Bruise,” says Jimbob finally, “was that it was one of the Carter songs that was written before Carter. It would have been rewritten a fair bit and it maybe became slightly darker than it was [intended]. The title came from a line in Brideshead Revisited. It’s a song I still play live when I do solo acoustic gigs.”

Jimbob’s new novel, Driving Jarvis Ham, is out now. Visit his website here. Check out the final week’s line-up at the Bull & Gate here. (And no, alas Carter aren’t playing).

Were you a fan? What was your favourite track or Carter memory?