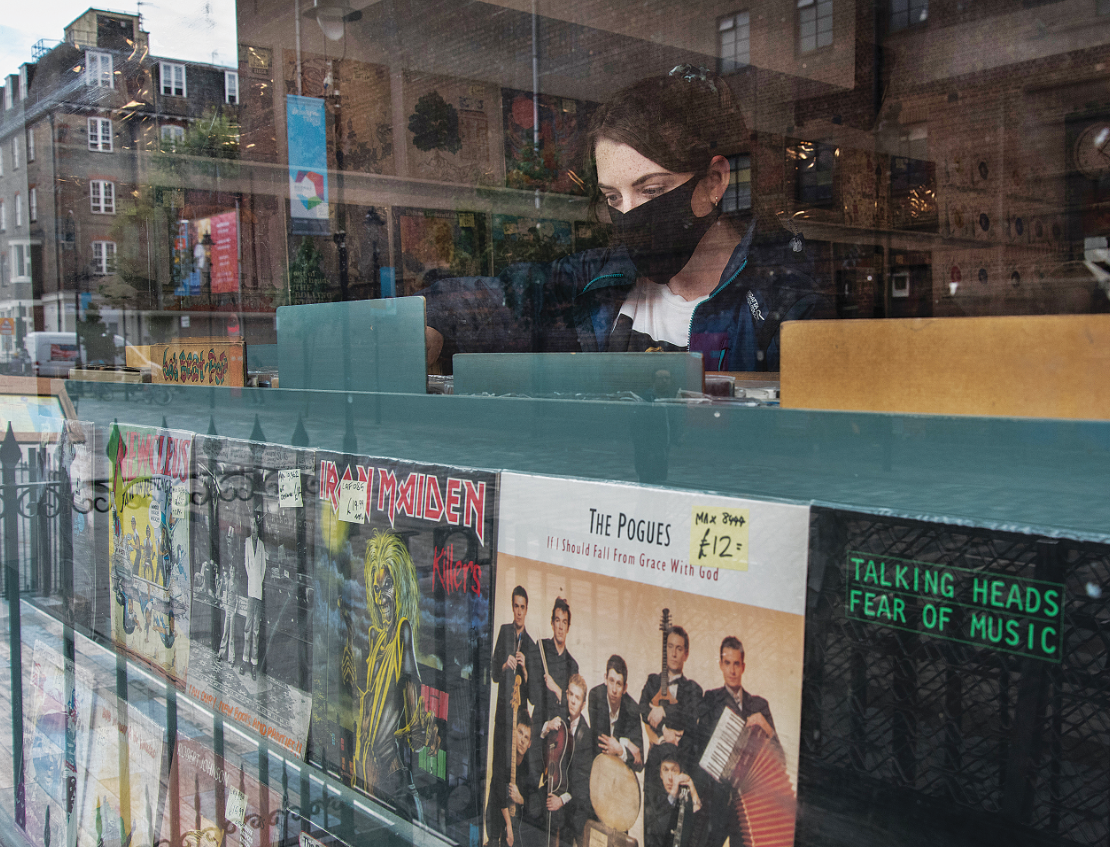 From Brixton dub shacks and Hackney vinyl boutiques to Camden’s rockabilly ravers and Soho’s feted jazz and dance shops, through Rough Trade and Honest Jon’s to Sound of the Universe – these brilliant (sometimes eccentric, always engaging) emporiums are documented with striking photographs by Quintina Valero and, I hope, incisive interviews.

In this exclusive extract I talk about the singular neighbourhood that is NW1 – and its long association with both live music and vinyl.

Camden Town was, pre-pandemic, one of the neighbourhoods that Londoners tended to shy away from, its famous market offering only tourist gridlock.

Getting around is difficult enough without having to sidestep Italian couples blocking the pavement while taking selfies or Russian teenagers sulking on the bridge because daddy has refused to buy the entire market for them. As the market now consists largely of T-shirt vendors and fast food outlets there seems little reason to visit.

Yet, once upon a time, the market offered nooks and crannies packed with fascinating traders. Needless to say, in the ’90s I would head for the record stalls: there was a Japanese guy who dealt in reggae 45s, an English bloke had suitcases full of vintage – yet mint – Brazilian LPs, a surly white guy called Nick sold an astonishing array of African LPs, while a solidly built young woman (whose hair was an inky, Gorgonish mop) offered up punk and goth records.

Sister Ray started as a Camden Market stall, as did Soul Jazz Records. There were plenty of other vinyl vendors, some only occasionally trading, others open whenever I popped by. By the 1980s Camden competed with Soho and Ladbroke Grove for the title of London’s foremost record shop borough: even Tower Records had a branch here (as did Honest Jon’s).

There were all kinds of collectors’ shops and, with its poseurs and punks wanting a pound for a photo and myriad pubs and houseboats and scruffy sense of mischief, Camden exuded London rock ’n’ roll’s urchin spirit.

Then, when Britpop took off in 1994, Camden overheated with hype and tourists. Inevitably, rents soared, and specialist record shops lost out to those selling tourist/teenage junk; a too-familiar London tale…

Even so, Camden remained – until the pandemic hit – London’s foremost live music hub: The Jazz Cafe, The Green Note, The Underworld, Electric Ballroom, Blues Kitchen, Cecil Sharp House, and the aforementioned Dingwalls, are all within a couple of minutes of one another, providing a smorgasbord of concerts by folk, punk, funk, jazz, rock, blues, singer-songwriters and much else.

There are also several pubs hosting live music around the high street. The mighty Roundhouse is just past Camden Market in Chalk Farm, while the fabulous Koko, a lush former cinema down towards Mornington Crescent, caught fire in late 2019 and, at time of writing, appears unlikely to reopen as a concert venue.

The Cabinet Gramophone Company of 73 Camden Road, founded in 1918/19, manufactured and retailed Fullotone gramophones and accessories (and likely also sold 78s), while A. Selinger at 67 High Street boasted on its 78 sleeves, ‘The Brilliant Incandescent and Cycle Accessories Supply Stores’ – quite a mouthful, but I get the gist: Camden, being a working-class area, had plenty of bicycle shops and many would have sold 78s alongside cycle accessories (as was de rigueur then).

While it was based in Tottenham rather than Camden, this gives me the opportunity to tell a tale of Hetchin’s gramophone store. Hyman Hetchin (1894–1961) opened his gramophone shop on Seven Sisters Road in 1922. Like many dealers in the early days, he also sold bicycles. In 1934, he went into partnership with Jack Denny (1906–91) to manufacture racing bicycles of Denny’s design. These became so successful that the music side of the business was discontinued.

As a devoted cyclist, I love the idea of a combined bicycle/record shop: perhaps it’s time for someone to open one? Tottenham is certainly short of both…Back in the late 1960s Blue Horizon, the blues label that launched Peter Green’s Fleetwood Mac, ran a small record shop out of their Mornington Crescent building. Both shop and label closed by 1971, leaving Kay’s Irish Music Centre, situated next to the Catholic church on Arlington Road, as Camden’s only record shop. Kay’s sold records from Irish entertainers alongside Elvis Presley and Jim Reeves (both honorary Irish icons).

Hard as it is to now imagine, Camden was once Irish London’s epicentre – there’s a scene in the movie Withnail & I where the two main characters, both ‘resting’ actors and fops, to boot (it’s 1969), enter a local Irish pub and find themselves unwelcome – and it was these people desiring music from ‘back home’ that Kay’s served.

The Pogues, who had strong Irish Camden connections, were apparently loyal customers. The Pogues were also loyal customers at Camden’s greatest-ever record shop, Rock On. As with Kay’s, Rock On no longer exists but, for almost two decades, it was the UK’s foremost record shop for rockabilly, R&B, Cajun, zydeco, garage bands and more, much more. Rock On began with Ted Carroll opening a Ladbroke Grove market stall in 1972, so I’ll tell the story of the stall’s rise in the West London chapter.

His success there (and in Soho Market) led to the setting up of Ace Records, a label devoted to reissuing rare records that customers asked for but were near impossible to find. Wanda Jackson, James Carr, Link Wray and Barbara Lynn (among many others) found new audiences via Ace’s reissues. Ace also recorded some of the new bands who were then shaking up London town, most notably Motorhead.

Needing a record shop out of which to run Ace, Carroll chose to do so in seedy, rundown, Irish Camden Town. Rock On’s record shop opened right by Camden Town tube station in late 1975. It was the right place at the right time – Camden had Dingwalls, a music venue booking the kind of bands that loved Rock On, alongside old Irish ballrooms then being transformed into music spaces.

Camden Market was, back then, a place where all kinds of energies got under way, while The Roundhouse, a noted rock concert venue since the late 1960s, would soon feature concerts by The Ramones, Flamin’ Groovies and other US bands who represented a new sound and spirit in rock; a sound and spirit that Rock On’s stock encapsulated and the aforementioned bands, and many others, would become customers.

Local lads Madness were regulars and, for their 1981 film Take It Or Leave It, would shoot a scene in Rock On. Rock On’s success encouraged others to open record shops in Camden and, by the late 1980s, there were dozens of shops and stalls both in and around the high street and market. The rise in media interest in Camden ensured the market boomed and reports that Britpop’s stars might all be found holding court (separately) ensured teenagers, wannabes, groupies, drug dealers, bullshit artists and visiting tourists flocked here as an earlier generation once did to Carnaby Street. When Amy Winehouse signed her record deal, she used her advance to purchase an apartment in Camden. Did she go record shopping here? Well, of course.

Inevitably, rents were hiked and by the mid-1990s, Rock On’s era as Camden Town’s premiere vintage vinyl dealers was coming to an end. Having built Ace Records into the world’s leading reissue label for rockabilly and soul recordings, Carroll and his business partners and staff settled happily into a Harlesden industrial estate. Many of the other Camden record shops had less happy endings, rent hikes forcing them to close.

Today, a handful of record shops remain. All survived the pandemic and continue to represent Camden’s raucous spirit. On Parkway sits Sounds That Swing, while a few doors up on Parkway is Rock ’N’ Roll Rescue, next door to The Dublin Castle (where Madness made their mark and tens of thousands of aspiring young bands have strode the stage).

Then there’s All Ages Records, a record shop on Pratt Street that specialises in punk rock/hardcore, Out On The Floor Records on Inverness Street, trading in Camden for thirty plus years – yes, it now is Camden’s oldest record shop – and finally, just at the foothill of Kentish town is Let It Roll Records, which opened in 2017. But to learn more about these you’ll have to buy the book to read interviews with some of the owners, and see images of these brilliant NW1 stores.

This is extracted from London’s Record Stores by Garth Cartwright and Quintina Valero,  published by the History Press, priced £20 hardback. Buy a copy here.