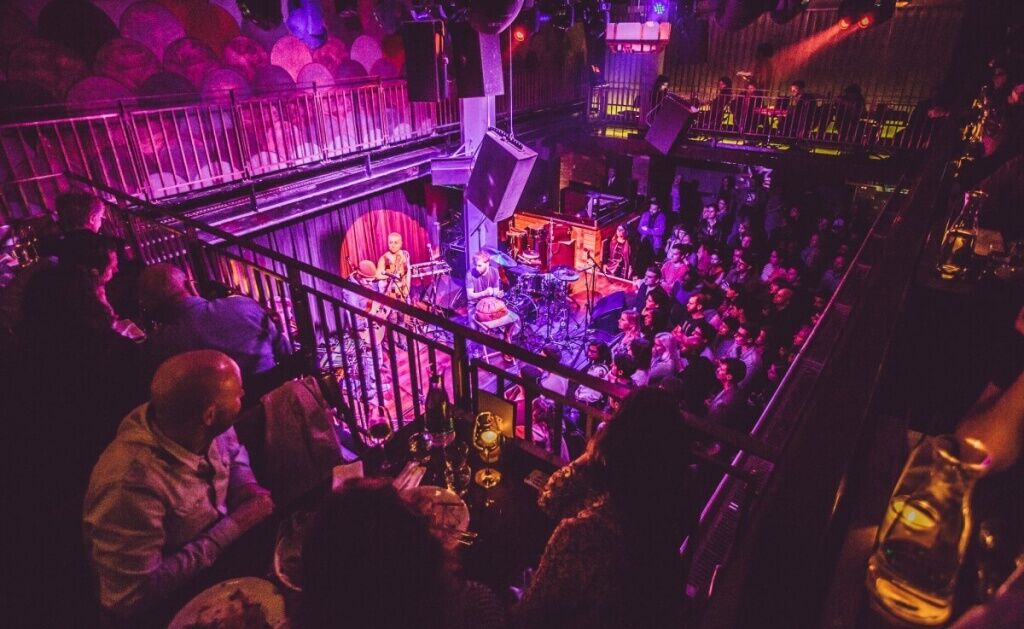 How the Jazz Café reclaimed its cool

“I‘ve always had a huge amount of love for the Jazz Café,” says its owner Steve Ball, when we meet at his office on a sunny morning, above Blues Kitchen (another of his company’s string of Camden venues).

“As a young man of eighteen, having just arrived in London from a suburban upbringing, it played a key part in my musical education.”

In the decade since he co-founded Columbo Group, the business has grown to operate ten popular nightclubs across the city, (from Old Street’s XOYO to Brixton’s Phonox), but Steve always had one eye on the venue that introduced him to artists like Terry Callier and Omar back in those formative years.

In the meantime, the Jazz Café had become a decidedly less inspiring kinda place. Caught up in a series of ownership changes, ultimately drawing it into the vast global Live Nation empire, it had become an unloved, smelly and sticky dark room, serving bog-standard drinks while playing host to the same old play-it-safe names on the heritage circuit.

“When we became aware Live Nation weren’t really interested in the smaller venues they’d acquired with the Mama Group, we essentially bit their hand off,” says Steve. Columbo took it over, closed it down, and set about stripping the entire space back to its foundations and starting again, with respect for the original spirit of the central performance space.

So it was out with the bars that broke up the dancefloor and created terrible backed-up queues,and in with a full suite of plush fittings, in a Soho-House-meets-Ronnie-Scott’s rustic-chic hybrid style.

“We put in new everything,” Steve recounts, “soundsystem, lighting rig, structural work – a total refurb. It cost us roughly £3m. There’s simply no business case for spending that amount of money on the venue. But we were so excited about it, and we had a blueprint from the past for exactly the kind of place we wanted it to be.”

Bringing the experience bang up to date while also returning to former glories required a rethink of the total offering, with the balcony – always such a great spot for intimate sightlines of the stage – now reinvented as a proper dining destination.

A few days after meeting Steve, we venture along to get a taste for today’s Jazz Café. As we’re led up to our table, the venue is already in full flight at 8pm, with the Chimurenga-style rhythms of Zimbabwe’s Heritage Survival Band livening up swaying crowds. It’s a celebration of the country’s exiled political singer Thomas Mapfumo’s 72nd birthday, and the rolling chants and hypnotic mbira-influenced guitars are creating all kinds of aural magic.

It’s dance floor-loud up on the balcony, so don’t expect to chatter much over dinner, but the menu is suitably bold enough for the environment. Our polished waiter knows exactly how to turn this challenging set-up into lively advantage too, swerving gyrating revellers all around to bring us a chilled and very quaffable bottle of Sicilian white, Tascante.

Small plates of chilli squid and burnt lime, plus richly spicy Baja fish tacos arrive, confirming the ambition of the kitchen and its fondness for dishes with a heat that reflects the bubbling cauldron of the audience below. Later, an ox cheek Thai red curry keeps the robust fiery theme going nicely, as we move on to punchy summer negronis served short in attractive heavy cut glassware.

It’s all a far cry from a flat pint of Carling in plastic beaker, which was de rigueur last time I was in this very spot a couple of years ago. As our meal segues dangerously into a dense slice of dark chocolate indulgence with a killer espresso martini accompaniment, so too does the live gig, which becomes regular Friday club night Soul City.

With prohibition-era swiftness, the dining tables are cleared. So we move, firstly to a bar tucked up on a further mezzanine level with a nicely clandestine vibe to it, before DJ Yoda’s set pull us towards the main dancefloor to break post-prandial sweat.

Dropping snippets of soul, funk, disco, jazz and hip hop, it’s exactly what this comfortably mature crowd want to rave to: quintessential, timeless Jazz Café fayre. Yet Steve assures us his reborn venue won’t fall back to relying upon just the sure-fire staples again. “Very simply, as with the build, we worked to a blueprint of what had gone on in its heyday for the programming,” he says.

“Sure, we still book the favourites like Roy Ayers or Jocelyn Brown as these are no-brainers, but this place was always about so much more than heritage acts. It was new music, old music – black music in all its forms.” He enthuses about showcasing hot new names emerging from London’s resurgent jazz underground; artists like Yussef Kamaal, Dan Kye and others putting out tracks on Peckham’s Rhythm Section label.

On the packed dancefloor it strikes me. Whether for discovering brand new acts or revelling in the greats, we have the most phenomenal small live music venue back on our doorstep once more. The current experience is worthy of the esteemed legacy again, indeed it’s elevating it to a new level with such a slick dining set-up and stiff cocktails readily on hand.

See you down the front. After dinner, that is.