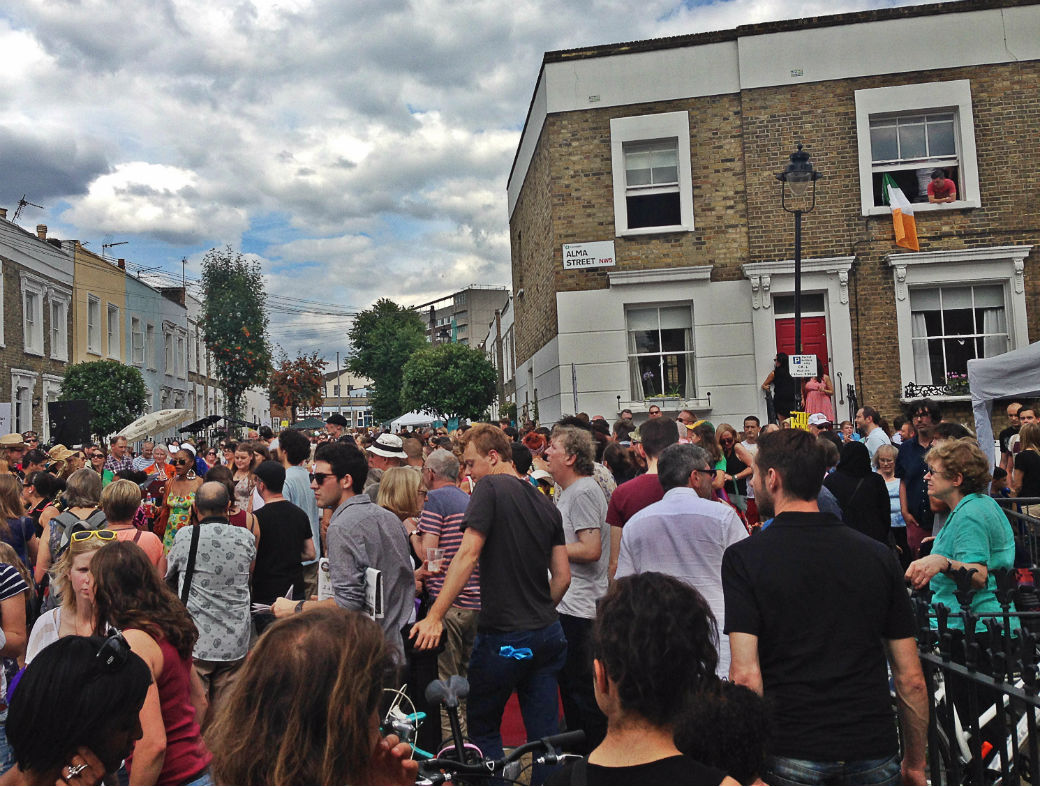 The curious tale of Alma Street and Inkerman Conservation Area

As most readers will testify, Alma Street, for many years in the noughties, enjoyed its own pretty fabulous annual jamboree, before Covid came along and put a stop to any such frivolous socialising. Isn’t it unbelievable that we all used to gather like this at all (main pic, above)?

But, as a road that most of us have traversed from time to time, what tales lurk behind its now well-tended facade?

Well, the street dates from 1856, its name commemorating the Battle Of The River Alma, the first indecisive victory for the Allies in the Crimean War. (History buffs will know that Crimea was considered the first modern war, with daily reports appearing in newspapers, tactical use of railways, and pioneering old Florence Nightingale in the thick of it.)

Gillian Tindall, in her excellent bible of Kentish Town ‘The Fields Beneath’ (read our interview with her here), talks in detail about Alma Street. Together with the other roads in what is now the rather lovely Inkerman Conservation Area (est 2001), it ‘soon filled up with pianoforte makers, wood engravers, dressmakers and railway workers, all helping to swell Kentish Town’s industrial proletariat, which was now threatening to swamp the middle-class inhabitants.’

Thus the Census for 1861 made bleak reading. What, Tindall wonders, can we conclude from the ‘failed life’ of a retired grocer living with wife (both only 49), unmarried grown-up governess daughter and another daughter aged 10?

Did the governess’s wage support the household? In other houses the Census reveals families of 7 squashed in the houses’ limited accommodation. These were the people, Tindall argues, who had fallen through the ‘inadequate security nets’ whilst all around there were relentless attempts to make Kentish Town go upmarket.

So Alma Street symbolized the ongoing struggle between, on the one hand, the poorer and more industrial west, and on the other, what was in Victorian times called New Kentish Town (now Caversham, Gaisford, Patshull Roads et al) and their insistence on creating upper middle class housing to ‘counterbalance’ the less desirable elements elsewhere in the neighbourhood.

It’s fascinating that this essential standpoint still thrives today, not just in Kentish Town, of course, but throughout London and beyond.

Yet current residents will be pleased to see that by 1898 Charles Booth’s poverty map show the street ‘very decent indeed; two families to a house generally.’

And in the 20th century notable residents abound. In the 1940s composer Phyllis Tate (who wrote The Lodger, based on Jack The Ripper) lived in No.7, and there were biographers, printers and publishers aplenty.

At No.30 was one James MacGibbon, a former communist who during the Second World War passed secret information to Russia that he felt the Churchill government should have shared. (He later joined the Labour Party, becoming a Camden Alderman, and lived on the street until 1971).

Finally? Lest we forget, a river runs through it. Several years ago the owners of No.8 dug out their cellar – only to discover the long-submerged Fleet right beneath their house. After all, neighbouring Anglers Lane was once a bucolic fishing spot.

Something to close your eyes and imagine in 2021, on yet another damp squib of a lockdown afternoon.

If you’ve enjoyed reading this, perhaps you could help us out, too? Kentishtowner is now in its 11th year, but with the demise of our free independent monthly print titles due to advertising revenues, we need your support more than ever to continue delivering cultural stories that celebrate our neighbourhood. Every contribution is invaluable in helping the costs of running the website and the time invested in the research and writing of the articles published. Support Kentishtowner here for less than the price of a coffee – and it only takes a minute. Thank you.