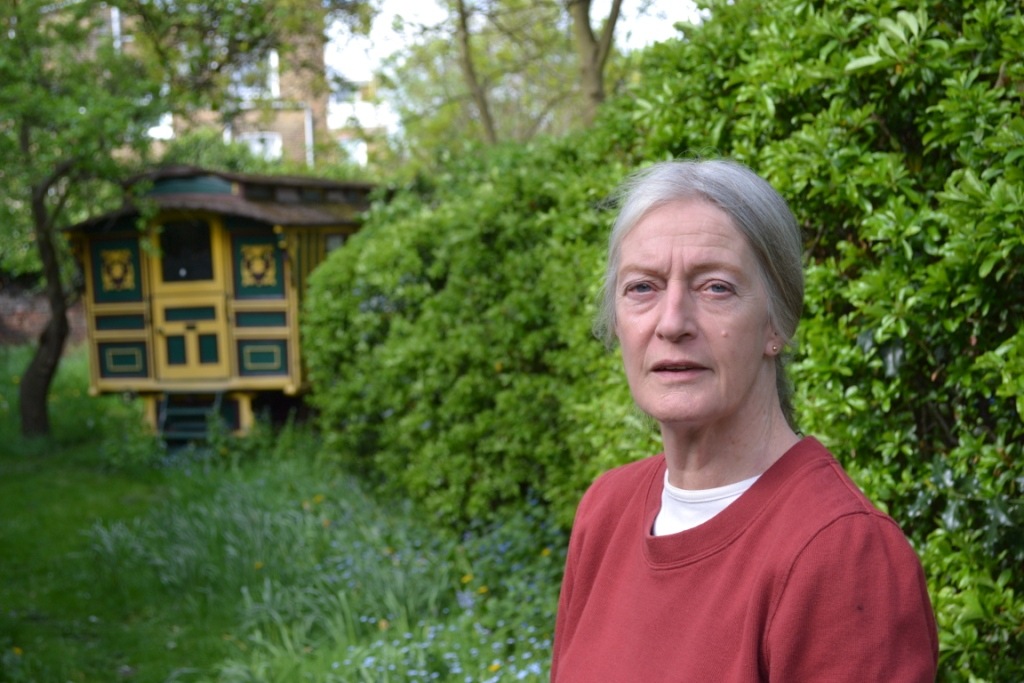 Gillian Tindall has lived in the same house in Kentish Town for fifty years. It was part of a terrace built in 1828, she explains, standing in the middle of her long lawn, gypsy caravan at its tip. And both house and garden evoke a sense of peace unexpected on a fairly busy artery.

I’m here to talk about the continuing influence of The Fields Beneath, Tindall’s seminal study of “one London village” (Kentish Town, for the uninitiated). Written back in 1977, it was reissued in 2010 and its meaningful dissection of the area’s history has inspired a new generation, from our own daily scribblings (and especially our Wednesday Picture column) to the eponymous artisan café by the overground station.

It’s breezy in the garden so we head inside, through a spacious kitchen to a living room that stretches the length of the house, with views onto the lawn beyond. Cassette tapes, CDs and books cram the shelves. And all around us builders clack around. “We’re having work done on our downstairs bathroom,” Gillian says, as she sits down.

What was Kentish Town like in 1963 when you moved here?
We were just another middle class couple doing a house up: the outside was grim, garden a tip. People from outside the area didn’t know there were all these nice streets. People still say to me, “You must have seen such a lot of change here.” Well, no not really, it was already fairly liberally sprinkled with owner-occupiers. It’s a matter of degree, not complete change. People have been getting Kentish Town wrong for God knows how long.

How much did the house cost?
£5000 – in today’s money that would be £60,000 or £70,000. We bought it with no mortgage; it wasn’t an impossible sum. Mortgages were difficult to get unless you bought a nice semi rather than a Victorian house – the bank thought Kentish Town a rotten area that ought to be pulled down.

Why did you pick Kentish Town?
We were living in Primrose Hill and terraced houses – unconverted multi-occupant buildings with sinks in different rooms – were already up to £7000 and not nearly as nice. So it was a practical decision. The person who really disapproved was my father-in-law, an old Hampstead resident who reckoned it was a nasty, dirty, working class place.

What was your first impression of the area?
In my teens I regularly got the bus from central London that would grind its way up through Camden Town, Kentish Town and Archway. It didn’t mean very much to me: it’s funny that the future doesn’t reach out and touch one – I had no inkling that this was where I was going to make my life.

Was Talacre a bomb site back then?
No, it wasn’t! There’s a myth that’s grown up that West Kentish Town was full of bomb sites. But the County of London Planning labelled it “an inchoate area ripe for removal” and intended to pull it all down. The towerblock Denton went up, Prince of Wales Crescent was wantonly destroyed – a very good street – and Harmood nearly too, but it was saved. In The Fields Beneath there is a map of what the council intended to do – all flattened except for Kelly St. Where what we call the Crimea, or Inkerman, now is was intended to be towerblocks.

What inspired The Fields Beneath?
An inscription, “The Fields Lie Sleeping Underneath”, chiselled over the door of a small house on Prince of Wales Road. But of course it wouldn’t have made its mark with me so strongly if I had not been gearing up anyway to a powerful interest in places and buildings and their history.

Are you flattered that a café opened nearby with the same name?
Absolutely. It’s lovely, I hope they do well. They wrote me a note asking if I minded, and have been very efficient about selling copies of the book and so on.

Talk us through a typical day in the neighbourhood.
I shop in a very old-fashioned way. One has the luxury of being able to here. I go trotting out with my basket at odd moments; if you basically work at home you’re equipped to nip out for odd quarter hour. I go to Harry’s the butcher for nice fish and very good meat. And to both greengrocers’ stalls – the one by the tube and the nice man opposite The Oxford. Bread is from various places, I rather like Earth. Then there’s Phoenicia, the good Lebanese shop, and my husband frequents Leverton Stores. I only have to be in a large supermarket for about three minutes to lose all desire for everything.

Do you have a favourite spot in Kentish Town?
College Lane, an interesting little run. Did you know there’s a war memorial half way up? Just on the join between two houses painted different colours is a little shield heavily encrusted with repeated applications of paint or plaster. It’s difficult to read the names of a dozen young men from that one lane who died in the Great War.

One of the occupants cleaned it up a few years ago. It’s not documented in my book, but it indicates various things: 1) the sheer numbers of young men who disappeared in that war from such a small area 2) the communal feeling there must have been in College Lane, home to mostly railway workers, to put their own war memorial up to their own boys and 3) foolishly this borough – St Pancras – decided not to put up a stone war memorial. Instead they opened a new outpatient department or something at Royal Northern Hospital on Holloway Road. A nice impulse, but that building has long ceased to be a hospital. A memorial must be a memorial if it’s to survive. So that’s why they put the shield up.

Do you have a favourite restaurant? Pane Vino, sometimes, and occasionally Kentish Canteen if there’s somebody I need to have lunch with.
What about Pizza East? The children and grandchildren like it. We haven’t been there but I’m aware of it.
Are you obsessed with coffee like many Kentishtowners? I’m glad Bean About Town is doing well, but if I want a cup of coffee I’ll have it at home.
And you’re not a pub person? I wouldn’t really go to a pub locally, unless to meet somebody who for some reason I didn’t want to meet in the house. When the Pineapple was threatened I supported it of course; and I’m pleased the Assembly House is respectably run now because it was pretty awful, its cut glass windows smashed during the period of bad landlords.

How could Kentish Town be improved?
Kentish Town is an ancient area and product of all the history it’s lived through. There’s only so much you can do with it. It’s subject to all sorts of pressures. It’s more polarized now, perhaps. I spend my life sitting on committees about what might improve the area so I won’t start on that. The council are continually putting out what are laughably known as consultation papers with little boxes for people to tick saying how you would you like to see KT improved. But places have a life of their own, it’s not for us to say. Having said that, the Neighbourhood Forum is necessary because the fear is that without one you get a cabal of businessmen claiming to represent Kentish Town.

And finally, it’s easy to forget that Kentish Town is just one of your many subjects.
Yes, one of my kingdoms. Round here, people say, “I love your book, dear,” and in an area in central France they say the same (after my book Célestine, Voices From a French Village), as they do in Bombay – I’ve written the only proper history of Bombay. The fact that I have these two other realms informs my view of Kentish Town.

I think The Fields Beneath is a book about the way metropolises like London absorb villages into themselves, true of Paris or Rome or whatever; it typifies procedures not typical to London. And my new book Three Houses, Many Lives is similar, except it’s about the route Hornsey went, a bit later than Kentish Town.

This is box title
Gillian’s new book, Three Houses, Many Lives is published by Chatto & Windus, £17.99. Buy all her books at the well-stocked Owl Bookshop.
This is box title

If you enjoyed reading this, perhaps you could help out. In November 2020, Kentishtowner will celebrate its 10th birthday. But with the sad demise of our free independent monthly print titles due to advertising revenues in freefall, we need your support more than ever to continue delivering cultural stories that celebrate our neighbourhood. Every contribution is invaluable in helping the costs of running the website and the time invested in the research and writing of the articles published. Support Kentishtowner here for less than the price of a coffee – and it only takes a minute. Thank you.