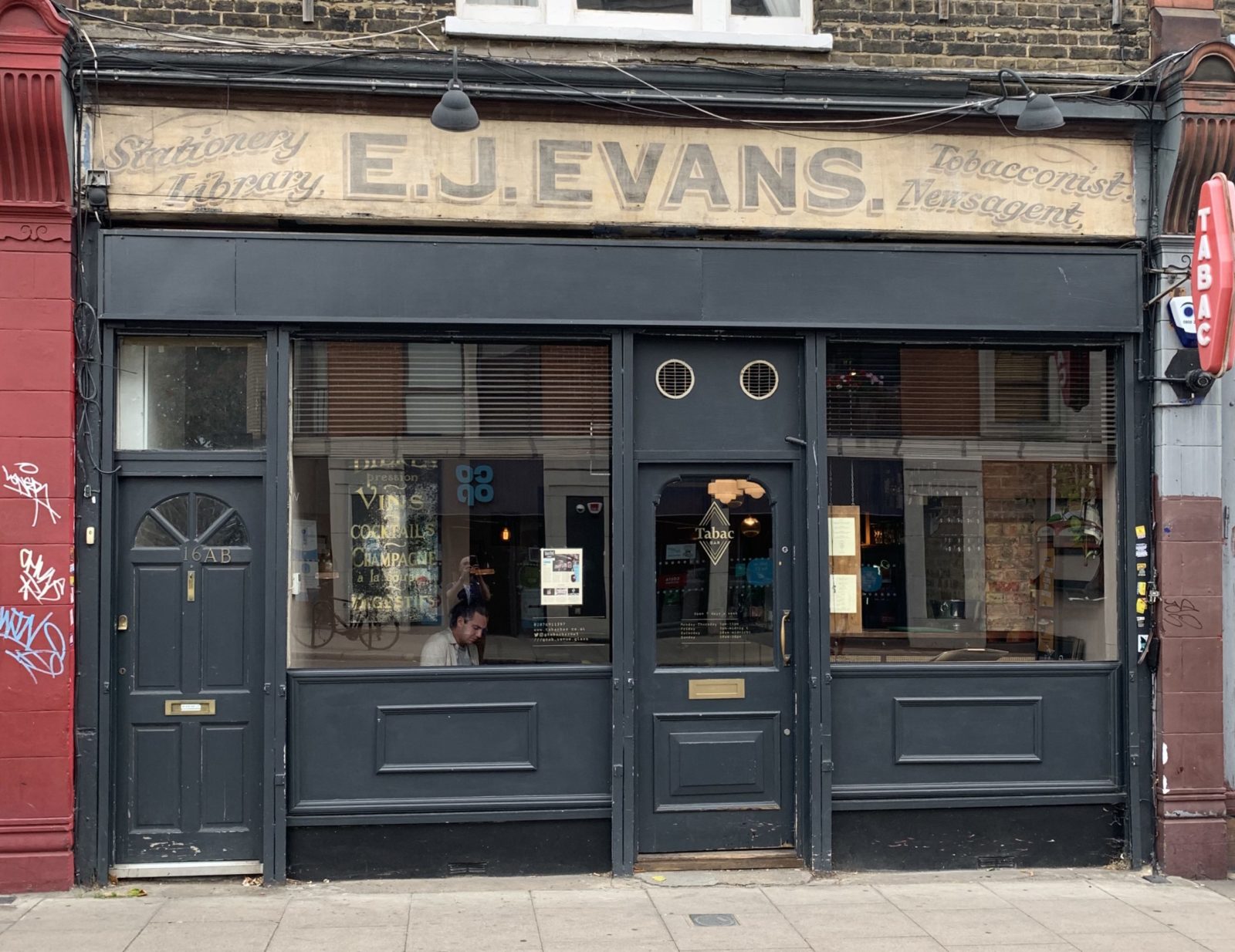 Just who was E.J. Evans? The backstory of Tabac

French bistro Patron is now, of course, something of a Kentish Town institution – but do you ever wonder about the origins of E.J. Evans, the ghost signage that still hangs proudly on the frontage of dinky sister bar Tabac?

In fact, it was the site’s previous identity that inspired owners Tanzi and Jean-Francois to create the concept. “Amazingly the site at 16 Fortess Road used to be a tobacconist, and of course we’re keeping the original sign,” said Tanzi in 2016 when the bar opened. “We have our own reclaimed illuminated Tabac light outside highlighting the way.”

Admittedly a bit overdue – four years, in fact – the other idle afternoon we decided to dig a bit deeper find the story of E.J. Evans.

And who had already had a snoop but regular Kentishtowner contributor and all-round NW5 aficionado Andrew Whitehead? Although, it has to be said, even he was stumped on the story of E.J until he posed the question to his own blog readers a few years back.

So what is the tale? Well, it turns out that it (documented in the comments underneath Andrew’s blogpost) starts nearly a century ago, when Welsh shop keepers came to London after the First World War.

In 1932, one such grocery store owner, Evan J Evans, married Jane T Laird. A year later, the pair opened the newsagents on Fortess Road, which appears in the phone directory from 1933 for over thirty years, until 1964.

Their children were named David (born 1932) and Eluned (born 1936), and the family lived above the shop.

Jane Davies, Eluned’s daughter, picks up the story. “My mother is Eluned Evans, daughter of Evan and Jane,” she says. “My grandparents had the shop from the early 1930s to 1965. Mum spent her childhood there, apart from the war when she was evacuated to live with a great aunt in Wales: in fact she lived there until she married my dad. We moved away but Mum, Dad, my sister Sarah and I returned to live above the shop until I was approximately four years old. Another sister Nancy was born there.

“We stayed in the area until the 1970s, although Granny and Grampy had left the shop and moved to Dorking in the mid sixties to run another shop.”

There was a proper Kentish Town streak that ran through generations of the family. “My Mum and I went to Camden School for Girls and Sarah went to Ackland Burley,” says Jane. “And my uncle David went to William Ellis.”

It’s not known where and when Evan died, but the death of a Jane Taylor Evans is registered in Sutton, Surrey for Feb 1994. She was 88.

And that’s about all we know: a family’s history in miniature – and just the smallest soupcon of local backstory to ponder as you sip a glass of Ricard, or nibble the cheeseboard – ours is the Truffle pecorino – at the atmospheric, candle-lit bar that is Tabac.

If you enjoyed reading this, perhaps you could help out? In October 2020, Kentishtowner will celebrate its 10th birthday. But with the sad demise of our free independent monthly print titles due to advertising revenues in freefall, we need your support more than ever to continue delivering cultural stories that celebrate our neighbourhood. Every contribution is invaluable in helping the costs of running the website and the time invested in the research and writing of the articles published. Support Kentishtowner here for less than the price of a coffee – and it only takes a minute. Thank you.