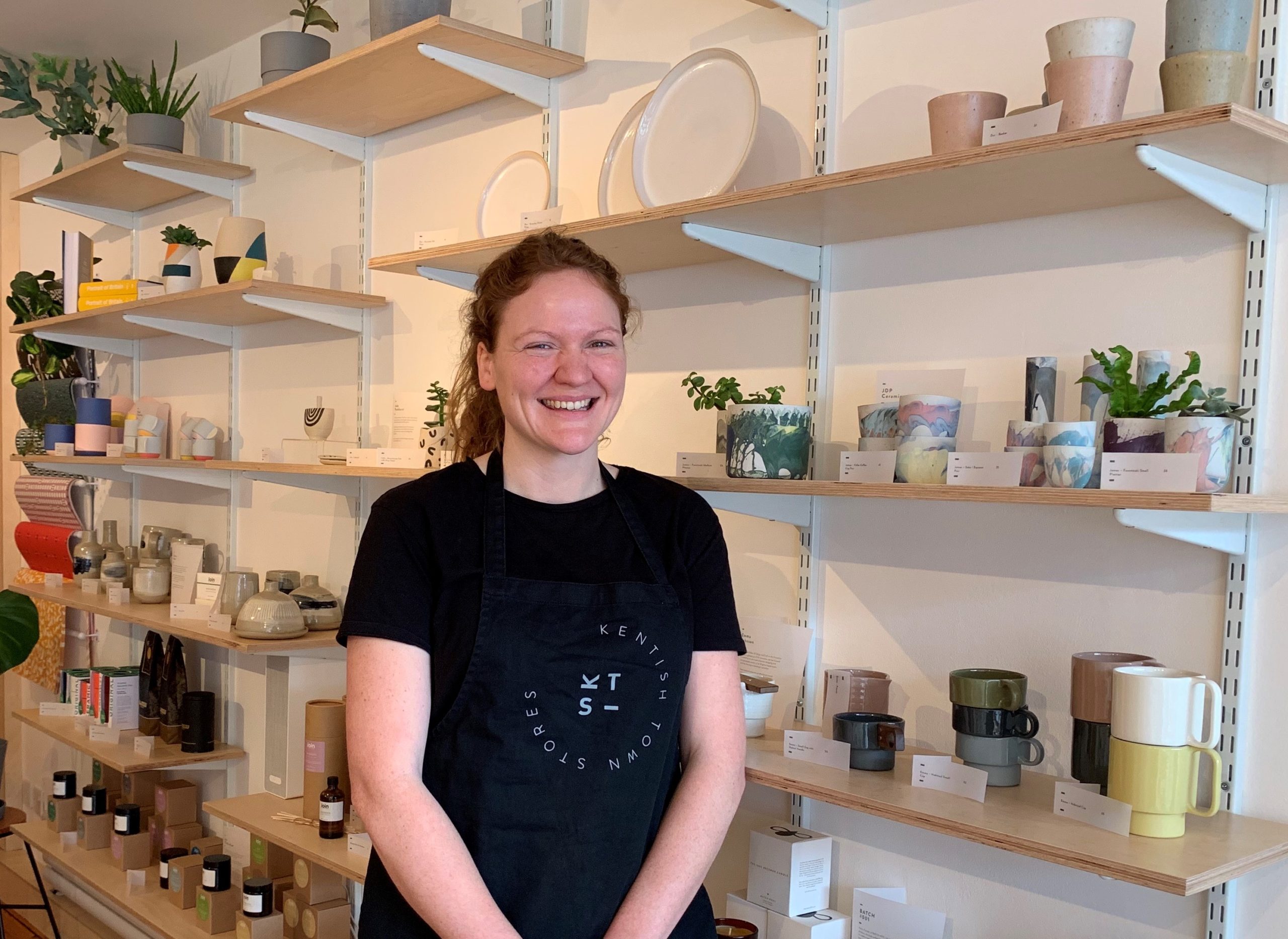 Check out this new artisan cafe, lifestyle store and co-working space in one of NW5's cutest buildings

Right in the dying embers of the last decade – that’s December 2019 to you and I – an understated, rather airy new venture was launched just off the main drag in NW5.

Kentish Town Stores is a multi-purposing artisan cafe, pottery and lifestyle store, as well as a co-working hub and events space upstairs.

What makes it even more special is its location in one of the area’s many underrated buildings, most famously the former Crossroads Women’s Centre (read their fascinating story here).

The other day we met locally raised owner Luci Noel, pictured above, to find out more.

Firstly, why the distinctive name? “It refers to the hybrid nature of the space. I always wanted to open a ‘general store’ that was a real hub of the community, and the name grew out of that. In the future I hope people will come in of a morning and grab a coffee, maybe a new mug to drink it in, a loaf of bread to take home and even a bunch of flowers. Equally you could buy a whole new dinner service, or invest in something very original from a graduate maker. Or maybe sit with tea and cake in the afternoon sunshine for a few hours.”

Sounds divine. And it’s certainly a sun-trap. “Yes, there’s something about the low building opposite and the way the daytime sun moves from east to west. We’ll definitely need some kind of shade when summer actually comes!”

So, talk us through the lay-out. “There were only four rooms so we had to build some new divisions. Behind the street-facing cafe is a meeting room, available for members free for hire, and upstairs a co-working space, which freelancers can hire a desk either by the day, week or month. There’s a private kitchen and dining too if you prefer not to engage with the store downstairs. We’re also starting to have weekend and evening events up there, from secondhand clothes sales and pilates classes to, in the future, communal supper clubs.”

How on earth did you come by such a unique space? “As locals will know, it was a women’s centre until 2012. It was then empty for four years before being used by Morgan’s Stationary as storage-cum-office space. I live on Gaisford Street and walk past the whole time with my dog. I’d been looking for a space locally and saw that Morgan’s were moving things out and put a note through the door.”

It was that easy? “Yes! They phoned me and said they were giving up their lease. We opened in December. We were lucky about the bones of the building and built everything ourselves – these tables, for example, in the cafe – and a carpenter friend of mine came in and did the counter bar, so all very hands-on. I sanded the floors and oiled them. My wider family came to decorate with me – so it became a real family project.”

Upstairs is a particularly elegant room. What was that like? “It was actually in good condition – we replaced the shutters, renovated the windows – but it’s so easy to underestimate the scale of it, and the work just goes on and on. The day in November that we got the keys the boiler broke and I was still determined to open before Christmas, so we had four weeks in a cold snap to do the work. Spending 12 hours a day here, in layers of clothing, the dog hated me even more. And the paint wouldn’t dry, so we brought in heaters. Finally, a friend came in to paint the signage.”

It’s quite an east London aesthetic. Why NW5? “I wanted to do this here simply because I’m from Gospel Oak. North London has so much talent, and there are so many creatives that live here – plus there’s such entrenched history of creative living, from writing to art and architecture – and yet, Zabludowicz aside, our immediate area still doesn’t really do enough to support it. It’s happening everywhere else in east and south London, but we’re still not really talking about it here; it’s always been the way.”

Are you an artist yourself? I did go to Central Saint Martin’s a long time ago but I’ve never been a practising artist, more a facilitator, most recently running the Affordable Art Fair.

We’re hungry now. What should we order? “The baked goods are from Brecknock Road’s Bread by Bike, who do the best sourdough in London. There are cakes made from leftover sourdough, very good brownies, as well as gluten-free and vegan items from Galeta in Hackney Wick (the vegan banana bread is delicious). And our coffee is Allpress, who’ve been roasting in Dalston for 15 years, while tea is Teasup based in Putney. All our suppliers are sustainable.”

Some lunch? “We have sandwiches, soups, salads (from spring), as well as light breakfasts and a minimal brunch menu – cooked by me and the team – that changes each week. The idea is simple food that’s delicious. That’s all.”

Tell us about the work on the shelves. “They’re mostly artists I’ve worked with or been following on Instagram for a long time. Predominantly ceramics, it’s all about functional craft to use in the everyday, quality work made with passion, and makers trying to do something a bit different. These guys are product designers as well as potters: they’re making things work, testing it: you’re not buying a cup, you’re buying the months of work that goes into making it.”

Finally, what’s next for KTS? “I want to bring lots more potters, as well as complementary alternative products. I see it as about investing in yourself and investing in your lives, that well-being element, making considered purchases: less going to landfill. And I want to work with the latest graduates this summer, too. Watch this space.”

The Artists: Our Top Picks

Geographically closest to the store is Anna Jones, who lives in “spitting distance of the shop”, says Luci. A co-founding member of the Clay Collective in Hackney, she is one of 12 potters who share a studio: we especially like her eye-catching Splatter mugs.

Lily Pearmain is based down in Peckham. “She studied Russian before a stint as self-taught baker making sourdough, and then became a potter, says Luci. “As she hasn’t had any formal training she does whatever she wants. When you’re taught ceramics you’re told you shouldn’t make hollow objects as they explode in the kiln but she was never taught that so she’s found a way: this pestle and mortar is tactile and easy to use.”

Emma Johnson, whose stacking coffee cups are rather stylish (and practical), is based in Brighton, “but her tutor lives round the corner so came in and saw her work”, says Luci. “It’s all based on brutalist architecture – she’s just done a research trip to Kiev and I can’t wait to see what comes out of that.”

Curious to find out more? Kentish Town Stores is open 830am to 5pm, Tues-Fri, and 9am to 4pm, weekends, at 230a Kentish Town Road NW5 (it’s actually on Caversham Road behind Barclays Bank). Find out more about renting a desk or their evening and weekend one-off events here.

This is a sponsored post in collaboration with Kentish Town Stores. Main image: Stephen Emms