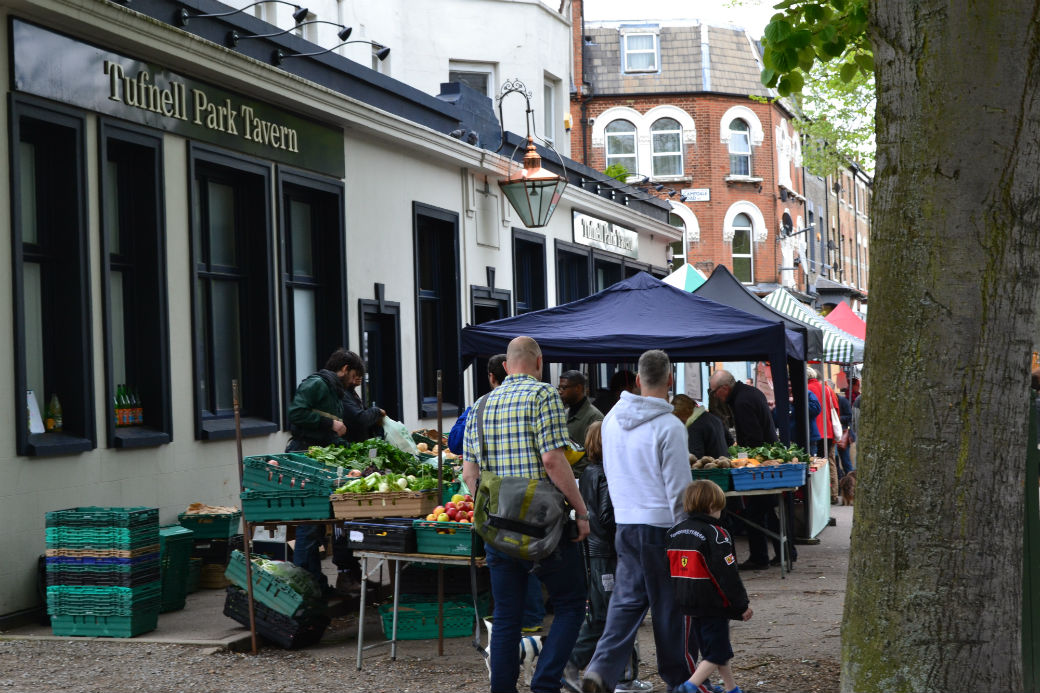 Why hadn’t we spent a Saturday afternoon pottering around the Tavern before?

When the  Tufnell Park Tavern first opened, we took to its pleasant decked terrace out back – perfectly positioned for the evening sun – like a couple of workshy lizards. But on an occasion when we tried the pizza with our pint, we weren’t impressed. There were, it seemed, better wood-fired ovens elsewhere.

We’ve since eaten in the dining room now and again, and enjoyed the experience, but haven’t rushed back. Which is odd as the pub is owned by the same small company who also run the nearby Lord Stanley, where we’re regulars, the food reliable and well-priced. (In fact the Stanley, readers may remember, is one of our all time Camden gems, except for the lack of draft beer from the Brewery.)

Anyway, invited down to the Tav for lunch the other week, we thought: why not? Especially as we’ve heard good things from readers about the farmers’ market outside, and the new gallery upstairs.

And sure enough, the place, both inside and out, was buzzing when we arrived, not long after midday on a Saturday. With ageing mutt rather than ankle-biters in tow, we’d forgotten that this is, of course, peak kiddie dining time, so tiny shrieking people were busy racing around the large room’s Chesterfields and tables. This kind of thing is normally Pepper’s bete noire; yet somehow the darkness of the interior absorbed the excess noise, and she dozed placidly (no mean feat, even for a middle-aged Jack Russell).

And you have to admire the use of space, especially as the site has had some pretty hideous previous incarnations. Now it’s a pleasant all-day deli, a not-too-big pub area, and an airy dining room. Not an easy balance, necessarily, but it works.

Pizzas aside, the main menu is fashionably short and seasonal. After a fishy bowl of boquerones with almonds to accompany a chilled Cote de Provence (the wine list starts at £15.90), our starters differed in quality: duck liver pate, its deep flavour livened by a very appley chutney, was wonderful. Asparagus, good value at £4.50, was nicely cooked, but its accompanying poached egg was rather scrawny, undermining what should be an effortless combination.

Our mains continued the mixed bag theme. Sea trout was well-cooked, its pairing with samphire, capers and new potatoes pleasant enough, but it was the kind of dish easy to throw together at home. Fair enough, but £14.50? A lamb steak, on the other hand, chargrilled with lettuce and pancetta stew, broad beans and a moreish parsley and almond dressing, was hearty and packed with flavour.

Desserts were weaker: a huge, quite tasteless meringue came with a delicious rhubarb and tangy lavender compote; while salted caramel ice cream just didn’t pack the flavour of the nearby Ruby Violet.

After lunch, we wandered upstairs to the Red Hand Gallery, a quite bohemian space curated by artist Samuel Millar, just graduated from Bristol (where he has exhibited at the Arnolfini and Spike Island).

The gallery walls currently host artwork from 24 local and international artists alike, including, surprisingly, an Angelino Valentino limited edition Kate Moss print from the Guggenheim that’s on sale for a mighty £10,000. A new show opens on the last Thursday of every month, Sam explained, so it might be worth swinging by one evening.

Back outside the farmers’ market was still buzzy, even mid afternoon.  We picked up a chewy sourdough, and pottered round Ted’s Veg, and the brownies stall; an enjoyable post-prandial mooch.

And, we concluded, sloping back up to K-Town, the pub really has tried to position itself at the heart of the community, as busy and child-friendly as nearby Pizza East, but perhaps more relaxed. With a few tweaks in the kitchen the food could be destination too.