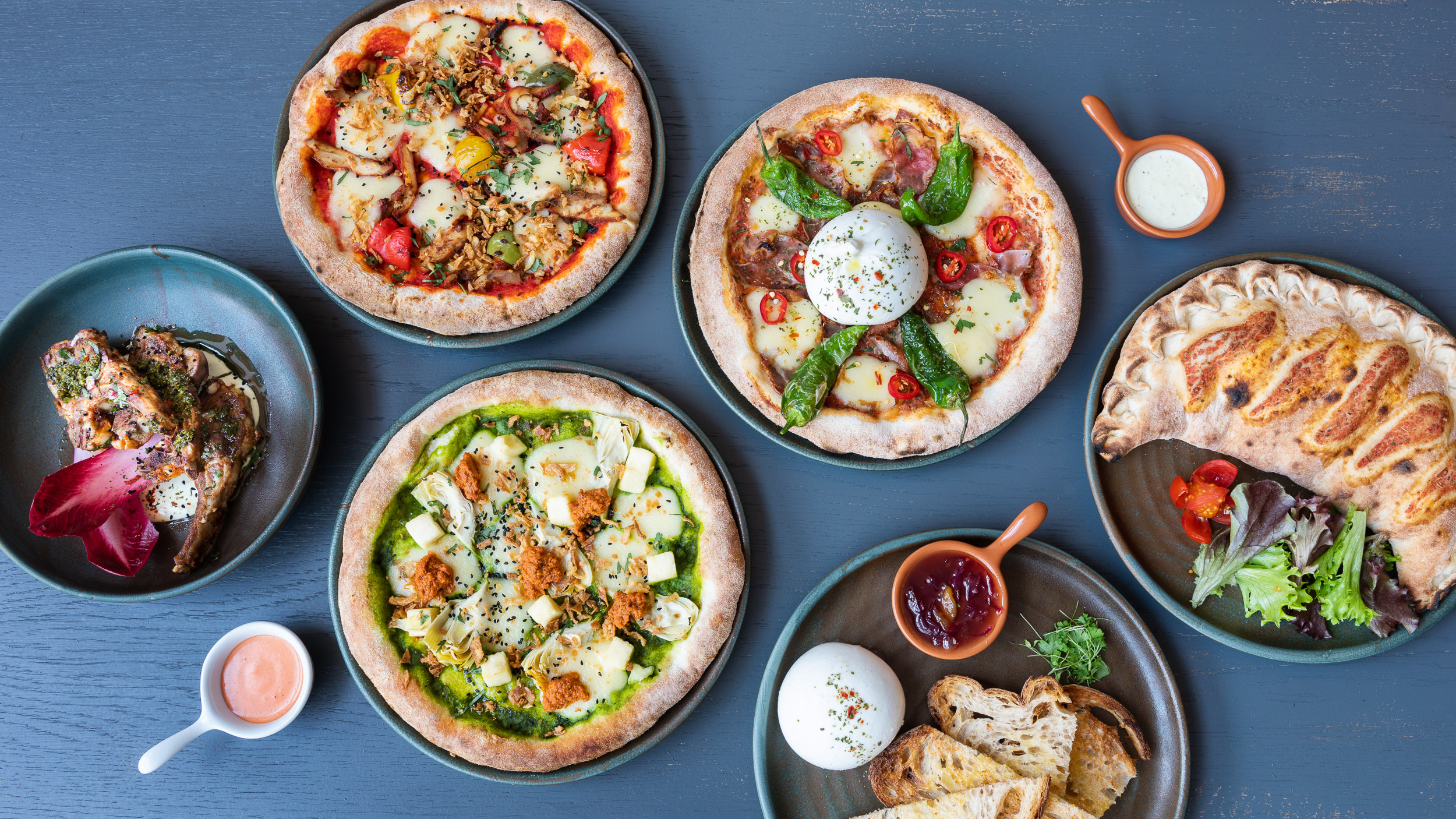 6 things you should eat at East West, Tufnell Park

The flavours of northern India pair surprisingly well with thin-crust Puglian pizzas, as well as small plates, at this new NW5 destination

Fortess Road’s food scene ebbs and flows, and right now, happily – despite everything – it appears to be on the up.

Fusion pizzeria East West, occupying the spot of the long-running Stingray pizzeria, was one of many new businesses caught in the maelstom of Covid. An original February opening date gave way to abrupt closure at the end of March, before a restyle as a lockdown delivery business on Just Eat and Deliveroo. The restaurant itself reopened in July.

Founded by local Devinder Singh, it’s a genuine neighbourhood destination that marries southern Italian-style pizzas with the home-cooked delights of northern India. An unlikely partnership, perhaps, but the intriguing menu more than rewards some close attention.

The 48-cover restaurant has a relaxed, communal feel spread across two floors, with the larger, airier dining room upstairs in the mezzanine. Wooden tables paired with terracotta and turquoise seating run throughout, with exposed brick and ornate blue wall tiles. There are burnished floor-to-ceiling mirrors, houseplants, and an attractive neon ‘Bar’ sign taking centre stage as you enter.

Devinder’s childhood was spent in Northern India, where Sunday family feasting would entail bowls of butter and Achari chicken filling the dinner table. Thus traditional meals such as these were the starting point for his concept – the pickling spices of achari dishes, richly satisfying butter chicken from Delhi, vibrant northern masalas and the tang of Punjabi spices.

“East West is all about the fusion of Indian and Italian, reimagining age-old north Indian recipes passed down through generations across the region,” he says.

“I’ve always been a huge admirer of how Italians from the southern regions, Puglia in particular, make their pizza,” he says, “and the light, crisp base found throughout the area provides the perfect stage for punchy Indian ingredients.”

1. Amritsari Chops
From the list of mostly Indian-inspired small plates, Amritsar, the second-most populous state in the Punjab, lends its weight to a variety of dishes cooked on the tandoor. They include these juicy cutlets (see pic, below) marinated for 24 hours in a house masala blend – “my wife’s grandma’s spice mix,” says Devinder, with a smile. They’re tender and splattered with a herby salsa verde and a whorl of yoghurt, fiery with black cumin seeds.

2. Achari Crab Cake
Another starter, this flat golden-fried fish cake, with its notes of spicy pickle, sits on a vivid-red hot tomato sauce. It’s topped with aromatic fleshy jumbo prawns: watch out for the cardamom aioli too, a real flavourbomb.

3. Butter chicken arancini
As well as pizza (see below), on the menu both arancini and pasta come in for the Punjabi treatment. The marriage of southern Italian staples with Indian spices is surely epitomised in the arancini (see pic, below). At £6 they’re great value and almost enough for a light lunch alone; and the spicy heat of the chicken works beautifully with the soft risotto rice and intense butter sauce.

4. Pizza
So: which one wins? The wood-fired menu is divided firmly into East and West options, with, say, a Margherita battling it out with a Masala Margherita, and a Vegan with a Masala Jackfruit option. Naturally we opted for the NW5 Special from the West side, its mozzarella, spicy nduja, salami, pepperoni and folds of bresaola firmly landing 100% successfully on the palate. And yet the East option was arguably more memorable still: Achari Chicken, the North Indian dish made by cooking the meat with pickling spices, tops a thin crust intricately woven with salty-sweet and fiery-mellow flavours: mozzarella, kalamata olives, capers, jalapenos, star anise and red onions. Yum.

5. Sides
You might need a crisp accompaniment to break up the richness of both the small plates and the pizzas. We enjoyed the crunch of a non-greasy red and white cabbage slaw with herbs and a touch of chilli, pomegranate seeds adding ruby-red tang; while healthier still was a vibrant bowl of roasted Masala chilli greens, stem broccoli, al dente pak choi and spinach.

6. East West cocktails
For the sweet-of-tooth, desserts consist of Indian household favourites such as the sweet pudding Gajar Ka Hawla, a twist on Devinder’s father’s own recipe; and Gulab Jamun Parfait, sweet milk solid dumplings soaked in sugar syrup with honey saffron cardamom cream. A little sated, this time we skipped pudding for the eastern and western hit of the libations instead. A signature Tiramisu Martini proved a fun post-prandial take on the classic espresso martini, with a smooth blend vanilla vodka, cacao cream and, of course, espresso. More tartly refreshing was a Bombay Mojito with blended scotch, a Masala mint syrup and lime: a tongue-tingling end to a genuine journey of a meal.

East West is at 135 Fortess Rd, Tufnell Park, London NW5 2HR, open every day except Monday (5pm-1030pm). Don’t delay to book a table as Devinder has extended his EatOutToHelpOut offer all September. And not only is there 50% off food and soft drinks (up to £10) on Tues-Wed, there’s Happy Hour from 5 to 7pm daily, with 50% off beers, wine and cocktails too. For more info and to book head here.

This is a sponsored post with East West. We are grateful to all businesses who support us in this way as it enables us to carry on delivering ‘good-news’ cultural stories across our wonderful neighbourhoods. If you are a local business and would like to be featured in a similar way please email info@londonbelongstome.com. Thanks!