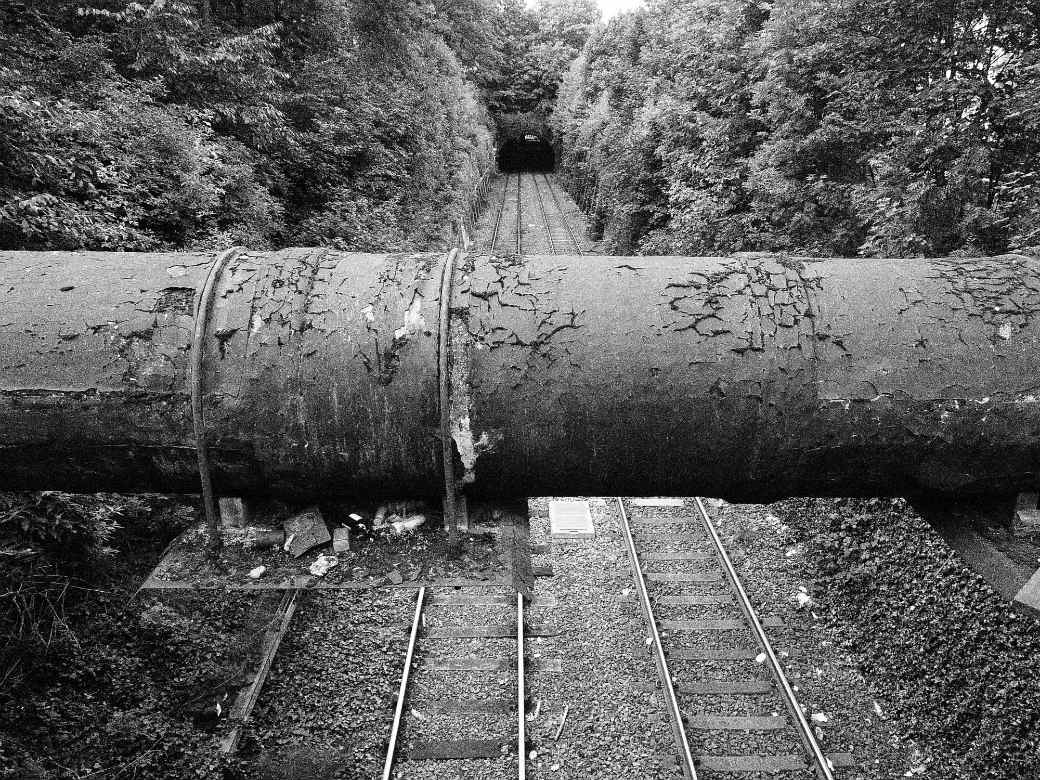 “We thought for years it was a gas pipe. But it’s not. It’s a river.” The words of a woman walking her dog over the foot bridge across two sets of railways tracks, from the side of Acland Burghley School towards York Rise. And she’s right.

The huge, ugly rusting pipe parallel to part of the bridge carries the river Fleet, the largest and most renowned of London’s lost rivers.

There are two principal tributaries of the Fleet – one from each flank of Parliament Hill. The more westerly branch rises from the Hampstead ponds on the west side of the Heath, and ran along what is now Fleet Road and through Gospel Oak.

It’s the route of the other tributary, the Highgate brook, which crosses the rail lines. Its source is at the top of the Heath, more than 400 feet above sea level. The stream was repeatedly dammed in the eighteenth century to create eight large ponds, some in the grounds of Kenwood House and others now serving as the men’s and women’s bathing ponds. The river then made its way through Brookfield (so that’s where the name came from) and towards Dartmouth Park.

The Fleet was once a much celebrated river, but became increasingly polluted by household and other waste. Concern about cholera, which prompted London’s move from open to covered reservoirs, also led to the enclosure of its lesser rivers. By the 1860s, the Fleet was linked into Bazalgette’s multi-level network of sewers. It had become entirely subterranean.

You can still hear it. Stand in the middle of Croftdown Road (please take care!) at the junction with Brookfield Park, and it’s often clearly audible through the manhole cover. From there it flows underground, below York Rise, until it meets the two adjoining sets of railways lines. The river is piped under the more northerly lines. The second set of lines are twelve to fifteen feet lower. And for a few feet, the Fleet breaks cover, within the confines of an enormous pipe, its black coating in disrepair, almost within touching distance of the foot bridge.

This is the only time the Fleet emerges from its underground lairs between the Heath and the Thames where, when in spate, it tumbles through an overspill sluice near Blackfriars Bridge.

From the railways lines, the Fleet once flowed south through Kentish Town (hence Anglers Lane) meeting up with the other tributary near Hawley Road, just north of the canal. When the river was forced underground, this remained the spot where the two streams joined – until, it seems, the 1950s or thereabouts, when the incidence of bronchitis along the line of the Hampstead brook prompted talk of a diversion across the south of the Heath. As with so much of the detail of London’s lost rivers, the exact underground route of the Fleet is not entirely clear. But it could well be the Hampstead and Highgate tributaries together which force their way through the pipe across the railway lines.

The river’s lasting mark is in the city’s nomenclature. Not simply Fleet Road and the still more renowned Fleet Street, but also Turnmill Street in Clerkenwell … and quite probably our own Kentish Town, its name derived from the branch of the Fleet that flowed through it, Ken Ditch.

This is box title
This is an extract from Curious Kentish Town by Martin Plaut and Andrew Whitehead, published by Five Leaves. Copies are readily available at online bookshops including Owl/Daunt while the lockdown persists.

For dozens more quirky stories about the area, check out our Wednesday Picture series here.