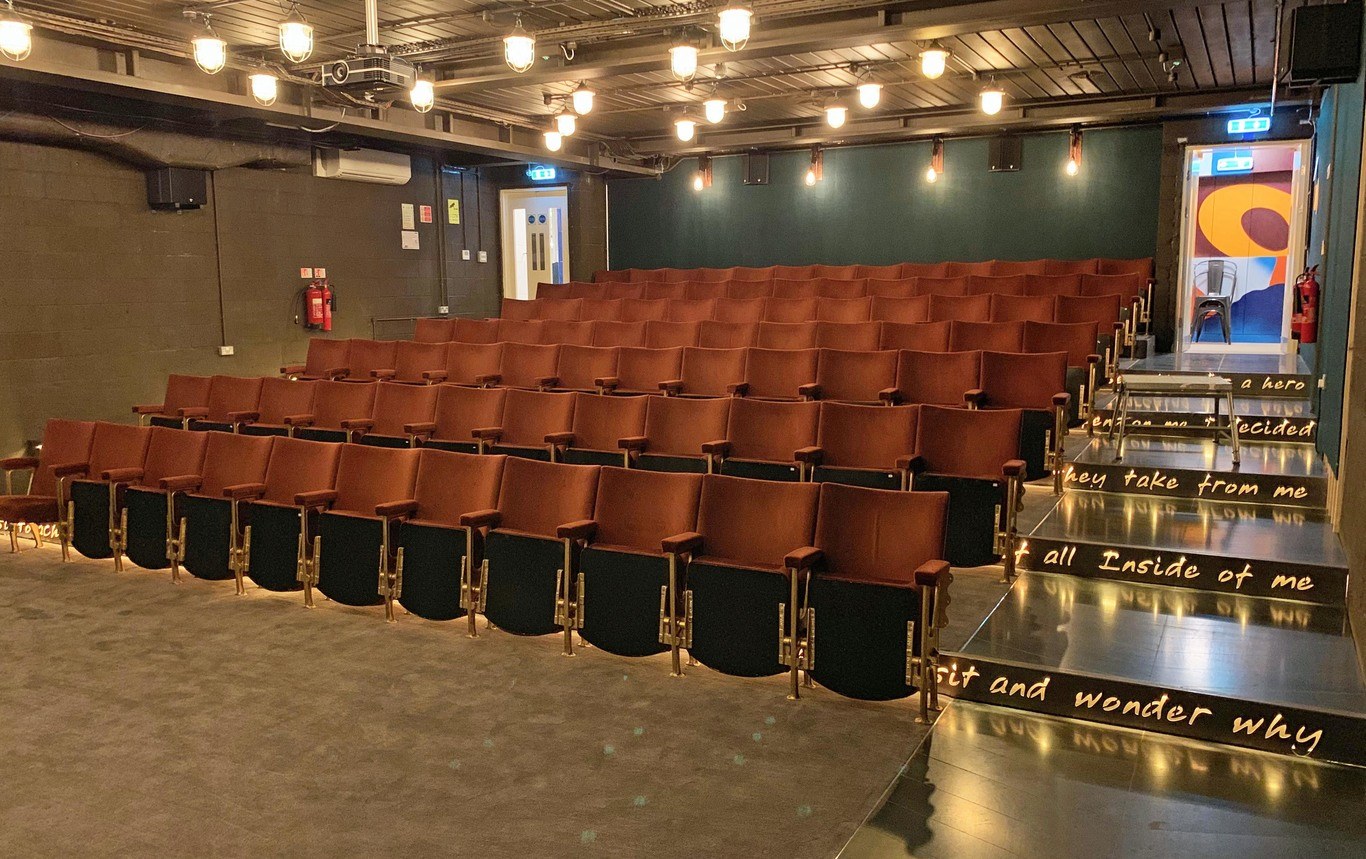 or over six years, locals have experienced withering collective disappointment at the unfulfilled promise of a cinema returning to Kentish Town for the first time in over four decades.

Meanwhile in an unexpected location just off the high street, a brand spanking new 100+ seater facility has been in construction, as can be seen in these first photos in all its fully air-conditioned mood-lit glory.

Before you dash to look for what’s on, it’s not a commercially run public cinema, however the friendly operators wish to extend an offer to attend some special screenings to Kentishtowner readers (see below).

As you can see from our exclusive first photos, it features fully accessible wide isles of reclaimed classic cinema seats, a large screen with wifi and satellite connectivity and a licenced café bar at street level.

The facility is one of a whole range of in-house comforts, (including a DJ area and breakfast lounge), for students renting accommodation upstairs or attending one of the regular language school courses, but the screening room space can also be booked by local groups for special events too.

It’s an exciting development for Kentish Town, where residents have overwhelmingly backed some form of new local cinema for years, to little actual avail.

After original plans for redevelopment of the former North London Polytechnic on the corner of Prince of Wales Road (more recently the UK’s biggest Pizza Express branch) were fiercely contested back in 2011, the dangled carrot of a new cinema helped usher through a revised scheme, only for it to flounder and the site to sit dilapidated and unfinished ever since.

While that project continues to be held up indefinitely, perhaps ultimately with no cinema in the final development, The Stay Club have – almost inadvertently – revived the grand tradition of the silver screen in NW5 for a new era.

Take a look back at our feature from 2013 which reveals the rich history of local screens including the long lost Gaisford, Electric Alhambra, The Gem, Palace, Gaumont and Lismore in a tour of the former sites.

Pick up the August print edition of Kentishtowner (out tomorrow, 26th July) for more on The Stay Club’s arrival in the area, their innovative offering and exciting plans for the months ahead.

Want to join us for a movie at The Stay Club’s beautiful new cinema?

We’ve teamed up with The Stay Club to offer Kentishtowner readers the chance to attend special screenings of movies for free, later this year. All you have to do is register your interest here. You’ll be put on our special membership list, from which we will notify you of the chance to enter a draw for limited free tickets and other local events.

In accordance with GDPR, you are free to amend or remove your inclusion on this list at any time via the link at the bottom of the sent emails.