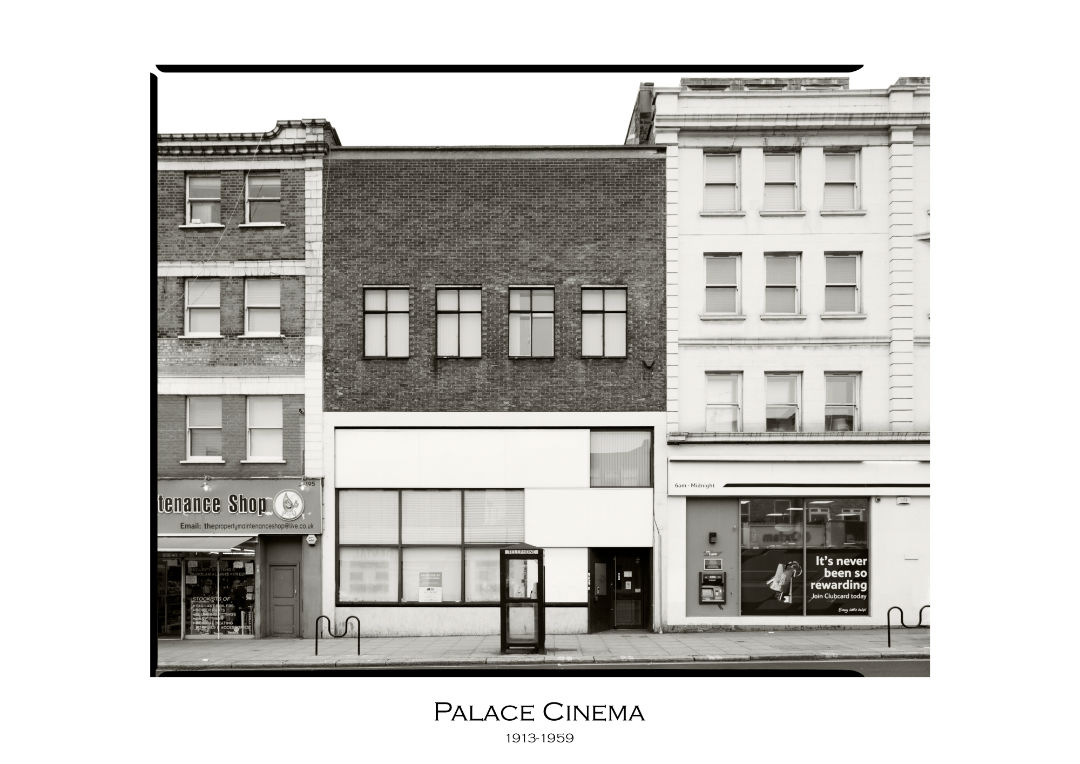 First, a sad truth: there have been no ‘flicks’ in Kentish Town for over 40 years. And yet at one point, eight different silver screens were aglow across the neighbourhood.

So I decided to go in search of NW5’s picture palace past. Was it indeed a Wonderful Life back then?

It’s a grey wintry morning as I meet artist Sam Nightingale at the Forum, which opened in 1934 to great fanfare. “You will never leave this theatre without feeling that you’ve had your money’s worth”, promised entrepreneur Herbert Yapp, who founded another in Ealing the same year.

Like everyone I’ve seen dozens of gigs at the Forum but until today have never actually been behind the building. “It allows you to get a feel for how big the screens were,” says Sam.

Sam’s work explores what calls “the architecture of film”. This includes the physical presence – or lack – of cinemas as a way to examine how memory and history collide in our urban environment.

The plaque at the front reads J. Stanley Beard. The architect designed two dozen such venues in the capital between 1913 and 1937 in a style described as “excellent, if stylistically slightly eccentric” by architectural historian Richard Gray, in his book Cinemas in Britain.

Looking afresh at the façade, I notice the gargoyles on the entablature above the pillars and signage for the first time.

Anyone with memories of seeing films there will likely recall the Forum as the ABC, the chain that took over the year after it opened. Inevitably, when it closed in 1970, the venue became a bingo hall then an Irish dance centre before its triumphant rebirth as the Town & Country Club in the 1980s. It reverted to its original name in 1993.

“Look up!” should be the motto of any urban walker. And glance above the Iceland shop at 303 Kentish Town Road and you’ll notice a stylish pediment. Is this all that’s left of the Electric Alhambra, which opened on this spot in 1911? Possibly not. It seems a bit early for art deco to have hit Kentish Town, but who cares? Just imagining what once stood here is, says Sam, like “going through a portal that enables one to think about the changes taking place in the landscape and cityscape”.

The Alhambra also housed a tea room with its own entrance for women and children around the corner on Holmes Road. We walk there talking about how those early audiences, living in overcrowded cold homes, were attracted as much to warmth and comfort as the films being shown.

Alas, the Alhambra’s life was relatively brief. The introduction of the Cinematograph Act in 1909 meant local authorities required licenses to safeguard against the risks associated with flammable film stock. It closed in 1918 after not renewing. But it may not just have been health and safety that scuppered this picturehouse. World War I made getting hold of popular American films much harder; by 1916 the Government was taking 25 to 50 percent of all ticket receipts thanks to its newly created Entertainment Tax; and, most importantly, it had competition from others on the same stretch.

When it closed in 1918 the Alhambra became a billiard hall before Marks & Spencer took over the site in the 1930s for the next 50 years.

Down the road at 1a Gaisford Street there are no visible remnants of the Kentish Town Cinema (later the Gaisford) which opened in 1910 and stayed in business longer than any other local picture house.

Cheaper and less smart than some of its neighbours, it specialised in showing second-run films. We look at an old advert from a 1917 edition of the St Pancras Gazette that promises John Drew, Detective and the 12th episode of a serial called The Purple Domino. The BFI website reveals its plot: “Lucille Love leads a double life. By day she is part of a wealthy social sphere, but by night, disguised by a purple mask, she enters the underworld. She is not a criminal, but longs for adventure and excitement.”

It’s worth mentioning that it’s not just the cinemas that screened the likes of The Purple Domino that are lost. It’s estimated that 75% of silent films have perished.

The Odeon chain bought the Gaisford in 1942 but it kept its local name until it closed in 1960. The building was eventually demolished to make way for the flats and shops in Northumberland House that stand there now.
Last year, Sam exhibited his Islington Lost Cinemas project in Hoxton: taking black-and-white photographs with a large format camera (almost outmoded itself), the images, often of flats or supermarkets, are titled with the original name of each, evoking what was once there.

There are no such reminders on this corner of Kentish Town Road. Sam punctures my wistfulness: “I’m not glorifying the past. As an artist I’m interested in the contemporary context of what’s there now without any nostalgia.”

“If you don’t mind me asking, what are you doing?” It’s a reasonable question of two blokes taking photos of the now vacant NHS Job Shop at 197 Kentish Town Road. We explain what it used to be. “Really?” Peter Lambrau owns the Property Maintenance Shop next door. We show him a photograph of the Palace, taken the year it opened in 1913. This was J Stanley Beard’s first screen, 20 years before The Forum. There’s nothing left of the elaborate front which included carved cherubs and wreaths all illuminated by electric light bulbs. But look at the top right-hand side of the picture and the structure is clearly that of Tesco Metro.

These are the sort of sites Sam loves, where you can fill in the gap of what was present a century ago with the neighbouring evidence of the remains today. And look at how haunting his photograph of the Palace is on this issue’s front cover.

We share some more facts about the Palace with Peter. The first in the area to show ‘talkies’ , it had 1052 seats, a Russian orchestra accompanied the silent films, and recruitment drives were held here during World War I. This was truly Kentish Town’s premier picture palace, with live entertainment in addition to movies on Friday night.

Becoming the Gaumont in 1948, the magic remained until 1959. Higher living standards and the arrival of TV in post-war Britain put paid to hundreds of big screens in the late 50s and early 60s. All is not quite lost of J Stanley Beard’s magnificent Palace however. We walk around the corner onto Prince of Wales Road where the side entrance would have been, and look up at the decorative plasterwork and arched top – still as they were in 1913.

Behind the Greek Church is St Andrew’s Church Hall, once the Venus. Opened in 1970 by a company called Aphrodite Films, it was an air-conditioned 185-seater showing mainstream second-run fare. Things got artier when film clubs started late-night screenings of foreign and forgotten classics. It’s a local tradition I now continue myself at Tufnell Park Film Club; in fact, one of our members recalls seeing Bernado Bertolucci’s The Comformist here in the early 70s. The Venus closed in 1975 – and we haven’t had a cinema in Kentish Town since.

Did you know the current vogue for outdoor movies – where you can watch films in car parks, on roof tops, or, God help us, in a hot tub – is nothing new? In fact, it may have even started in Kentish Town. In June 1911 the St Pancras Gazette announced that “one of the most startling, novel and original innovations connected with the picture world of London has just been introduced…”

You guessed it. The Coronation Gardens, a park opposite the old Palace on Prince of Wales Road, boasted a screen where Kentishtowners could enjoy a continuous stream of films in the open air. The novelty soon wore off – blighted by the Great British Summer – and it ceased operating in 1913.

Now the site is dominated by the boarded-up Pizza Express, where rumours persist of the first cinema opening in 40 years. And who knows, maybe that flickering wish will come true in 2014?

Anyway, our journey now takes us up Prince of Wales Road. We turn right to see where one of K-Town’s most loved movie houses once stood.

The Gem, which opened in 1910 at 160 Malden Road, is reckoned to be the first in the area. Even its current name, Court Service Station, is a lovely nod to the site’s cinematic past. In 1922 The Gem changed its name to The Court, remaining so until its closure in 1958.

New releases were never shown here, making it much cheaper than its more salubrious local rivals. It was a literal flea pit. In Mark Aston’s book, The Cinemas of Camden, Des Whyman recalls visits in the 1940s and 50s. “At that time The Court was managed by two brothers who, without fail, wore bow tie and evening dress each night, and welcomed you by name. The smart dress was a contradiction in terms of the state of the building, very shabby! The usherettes came down the auditorium’s two aisles and sprayed pesticide to kill fleas, flies and bugs.”

Yuck. And so, on to our final destination – which will require a bit of detective work. The Lismore, long forgotten in Gospel Oak, ran for just a few years from 1914 on a street that no longer exists. Strolling up Malden Road, we turn right down Haverstock Road to Lismore Circus. Looking at Sam’s 1912 Ordnance Survey map it’s possible to see how the playground here was once a proper circus, with numerous roads coming off a circular island. A few are still there. Lismore Road is not.

The Lismore became a 500 seater after a fish ‘n’ chip shop and dining room were converted in 1914. It closed in 1917 when, like the Electric Alhambra on Kentish Town Road, it did not renew its license.

This entire area was transformed in the late 1960s and early 70s when the low-rise council flats were built between the railway line and Mansfield Road, the longest single block of public housing in Europe. Sam reads another passage from Mark Aston’s book: “The forecourt of the housing block Ludham now covers the site of Gospel Oak’s only cinema”. I’m speechless. Thirteen years ago I lived in a flat in this very block. I show Sam my former home and we take photos of its exterior wall.

I’m suddenly reminded of something Sam said to me earlier, that his photographs of lost cinemas were “trying to evoke something of their previous life”.

The bricks of Ludham could easily be the bland walls of many a suburban multiplex. They’d also be the perfect surface on which to project a film.