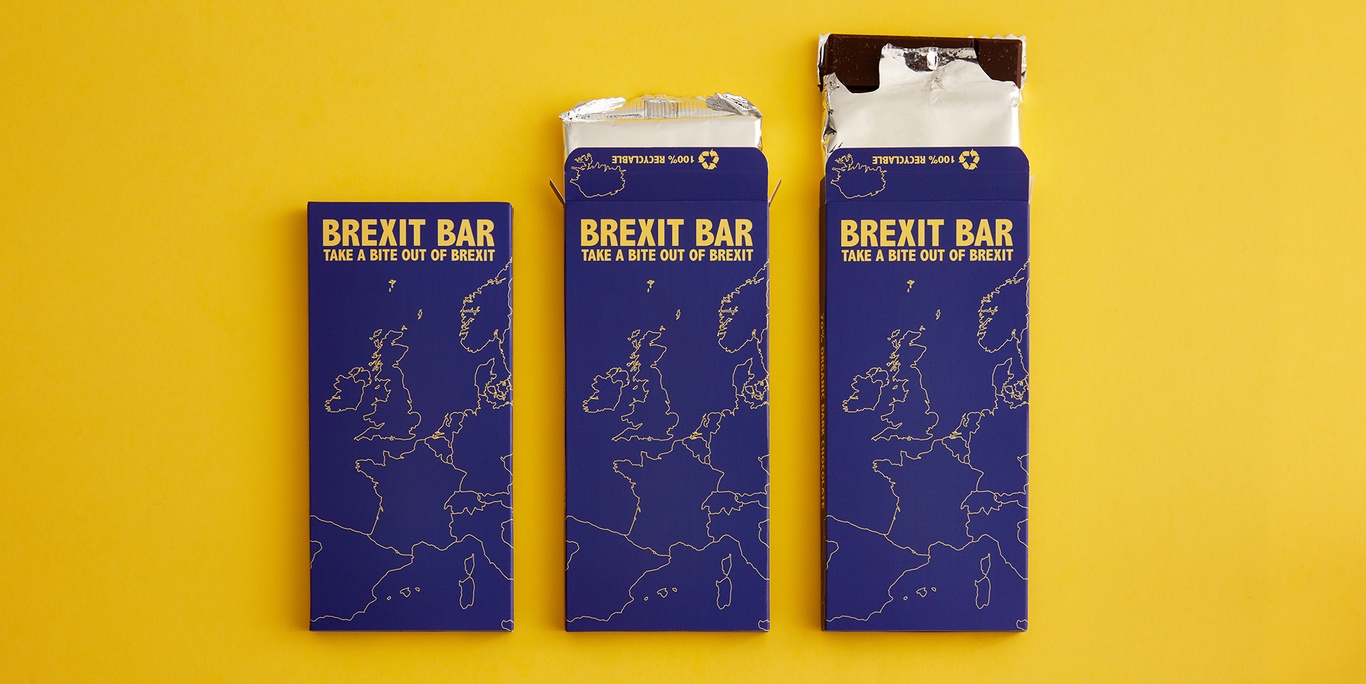 Love it or hate it – now you can eat Brexit

om Stewart and Nina Sivyer are two local twentysomethings who have come up with an unusual way of turning Britain’s Brexit uncertainty into a money-spinning – and also quite delicious – side hustle.

Alongside their day jobs, they’ve spent the first half of this year working on creating the Brexit Chocolate Bar.

“Our aim was to sell a product online, learn some new skills and have a bit of fun,” says Tom. “I’d heard how Airbnb launched 500 limited edition boxes of ‘Obama O’ cereal in 2008 to raise some cash for their then-fledgling business during the US elections. We thought if they can do political cereal, why can’t we create 500 limited edition political chocolate bars?”

With a bold design, some much-needed-right-now wit, and a 70% dark Ecuadorian organic fair trade vegan palm oil-free cocoa product, things have taken off, even while Brexit itself flounders.

“I love showing people the bar, as 99% of the time it makes them smile,” says Nina. “Brexit is a pretty serious issue and I don’t think anyone – remain or leave – is enjoying the situation we’re in right now. We were keen to bring some humour and light relief to all, therefore from the offset we were keen to highlight the bar is not only gluten free, but also bias free.”

Alongside instructions such as ‘store in a cool dry place but for a hard Brexit, refrigerate overnight,’ and ‘enjoy a bloc of choc’ the duo are well on the way to selling out their limited edition. And unlike the various Tory leadership candidates and Jeremy Corbyn agonising over the pros and cons of a second referendum, the couple won’t entertain the idea of producing more bars, however long the nation’s Euro debacle drags on.

“Delivering Brexit has obviously been more problematic than many believed,” says Tom, “and similarly we thought launching a chocolate bar would also be relatively straightforward but have encountered a number of challenges along the way. We’d highly recommend other budding entrepreneurs do something simple and small like this though, to test the water before investing all of their life savings into a grand project. Unfortunately for the government, you only get one shot at Brexit.”

The couple clearly have plans beyond Brexit and chocolate, but whatever happens next, they will always be able to say that it all began with the current meltdown.

Hungry for a bite of Brexit? You can grab one of the final Brexit Chocolate Bars here.