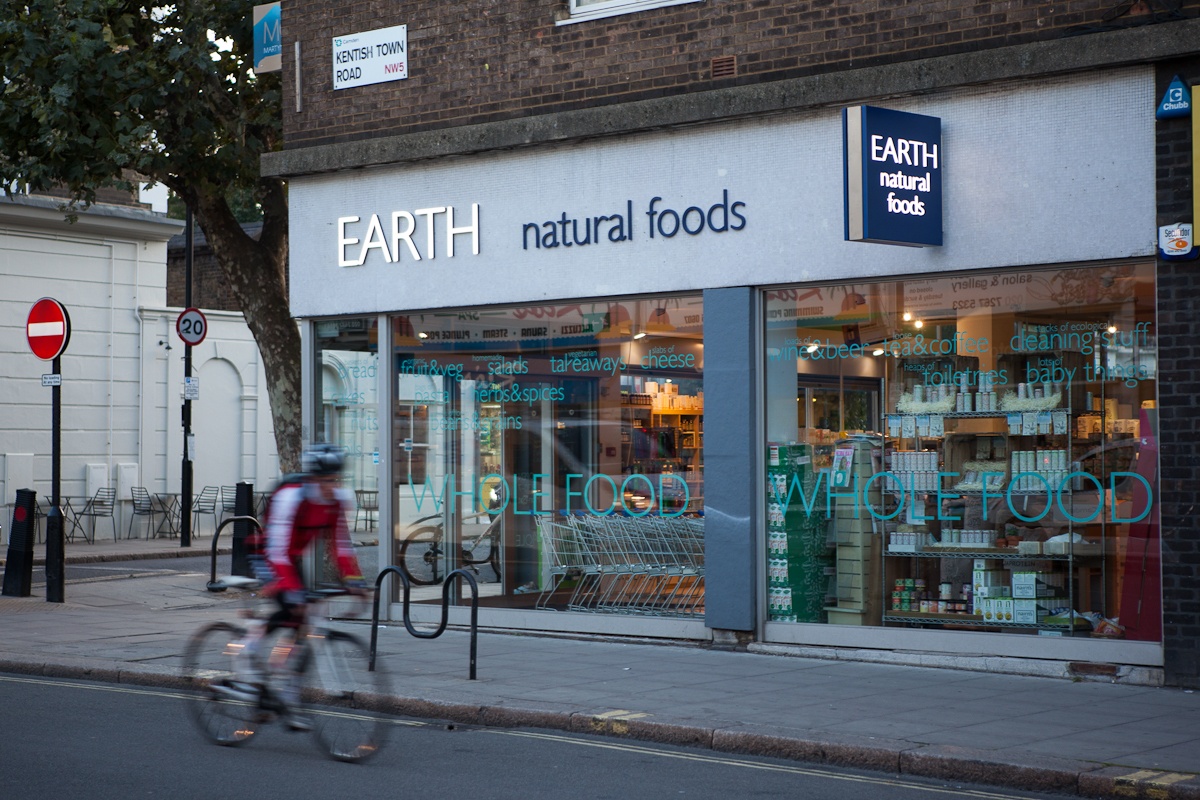 hen it comes to tackling plastics, one local store has been ahead of the curve for some time. We swung by to grab assistant manager Jo Syz for a chat about why the vegetarian wholefood shop has been such a pioneering force since way back in 2006.

“Kentish Town is a really amazing mix,” he says, “a diverse community, and I think there’s a lot of people who are interested in food, and where food is sourced from, and we cater for that.” Being eco-conscious and socially big-hearted calls for some fine balancing, but he is adamant that “we don’t want it to be a niche thing just for rich people.”

With that in mind, the team try and get “as much organic stuff as possible, but it’s always a question of trying to balance the price, making it as affordable for people because we want good quality food to be available for all.”

Earth’s eco-initiatives give the shop its distinctive, resourceful vibe. A mezzanine runs along one side, topped with cardboard boxes where nimble staff can be seen re-stocking the large sacks of grains and jars of spices at the front. Less visible are the ties between customers and distributors, but speaking to Jo brings these into view.

“We have quite a large following now from the zero waste community who are also sort of pushing us, which is good. We started by buying bulk stuff, but then they’re saying ‘Well how about this?'” And so shampoo refill stations have been added, with hand-wash and shower gel “because people have asked for it.”

Similar requests have seen the shop adopting universally recyclable soup cups and compostable cutlery, which is having “a knock-on effect on our distributor”, and encouraging eco-friendly foodservice manufacturer Vegware.

But in other respects Earth are true visionaries. A decade before the single-use plastic bag charge was made national in 2015, the store was charging 5p for carrier bags and donating that to charity. “We were ahead of the game on that one because it just made sense to us.”

Jo lends some historical perspective: “It’s so crazy. Fifty years ago people had bags that they used everyday to go shopping and you had a shopping bag that you’d take with you and that all made sense; it’s only recently that we’ve had the throwaway plastic.”

So where are their green eyes turning next? Recently they’ve been researching the rise of product bags – like the lovely cotton bread ones – which are big in the US and Europe, but slow to pick up in the UK. Elegant stainless steel water bottles from Elephant Box (a small British company) are matched by lunch boxes which equate to Earth’s hot food portions, and there are now little biodegradable bags in the nut aisle.

Earth is, then, in rude health, amidst the constantly changing Kentish Town Road. “Every time something opens, we wonder if that’s gonna impact us,” he says. “With Gail’s we were a bit like ‘Wuhh, what’s gonna happen there,’ but actually we’ve found that people will go for a coffee and think they might do a bit of shopping – and pop across the road here.”

Jo concludes that Gail’s isn’t in direct competition because “it’s coffee, it’s sit down. At Naturally (the new artisan food shop across the road) they’re selling a lot of meat; we’re a vegetarian and vegan place, so again it all helps to bring people into the area and makes Kentish Town more diverse.”

So what’s his favourite food? “Our delicious salads. We try and change with the seasons as much as possible, so in apple season, we’ll have five different varieties of apples. Food tastes like how it should do.”

And this retail whizz has another string to his bow: when he isn’t helping to source beautiful organic produce, Jo is an independent photographer and filmmaker, whose work documents humans’ impact on the environment. His film Frack Free Lancashire, made with film co-operative Anxious Activism won the 2018 British Documentary Film Festival Environmental Award. Here’s to Jo – and Earth – continuing to light up the high street for many more years.