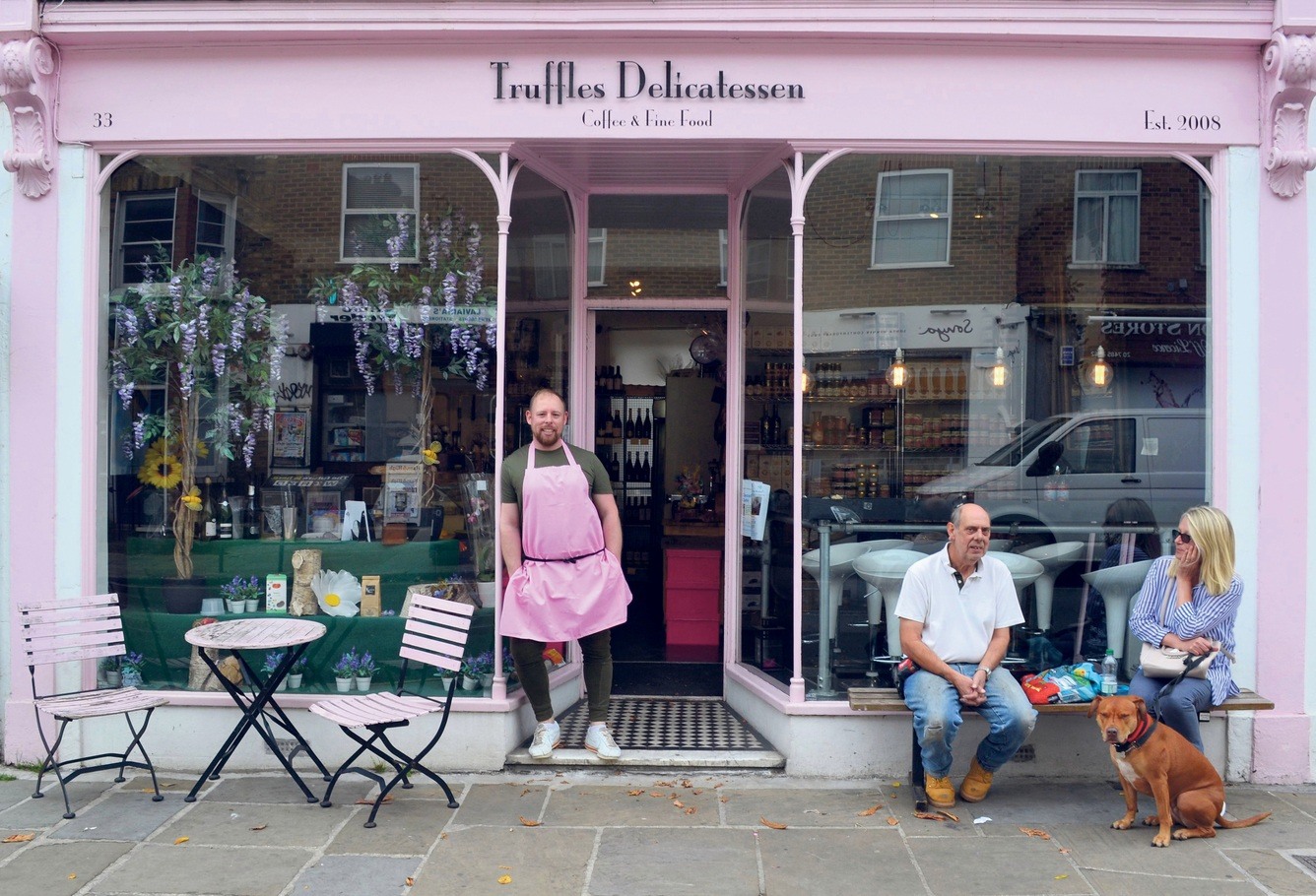 Back in autumn 2008, as the recession raged across the UK, Junction Road boy Lee Smyth pretty much risked it all to start a community-focused, Italian-leaning café in Dartmouth Park. With no retail experience whatsoever, to boot.

“I was working at Buckingham Palace,” says Lee, which may come as a surprise if you’re more used to him whipping up a latte. “And I loved it: I’d joined the Household Cavalry in the army at 17, learnt on the job and became a Liveried Helper for eight years.” Which meant what, exactly? “Looking after two, or sometimes four, horses, riding, driving and getting them ready for state occasions.”

So why on earth quit? “I was madly into food. It stemmed from when my uncle took us to Rome and I got a vibey feeling walking around. People seemed happy; it’s like what we do on Sundays here with a roast, but over there it’s an everyday occurrence.”

Lee was torn between the Palace and food. “I had an early midlife crisis coming up to 30,” he says. “I realised I like finding the products, the small producers, and so knew it was a deli I wanted. I took the massive step of leaving the Palace, and then we found an empty unit in Denmark Hill – but it all fell through.”

While Lee and his wife looked for another potential site, he used his years of equine expertise freelance filming – “getting into costume, stunt-riding, and carriage-driving,” he says – for a list of Hollywood movies and TV shows including Wolfman, Pirates Of The Caribbean, Sherlock Holmes and Downton Abbey.

It all sounds pretty glam. And yet still the obsession to switch careers? “It was brill, but I preferred food more. I really, really did. And when my late wife Michelle found this place on York Rise, down the road from where I grew up, it was like I’d come full circle in life – gone to the army, married super-young, got a flat in Buckingham Palace – and ended up back in little old Dartmouth Park.”

The café was called Gorgeous, a posh greasy spoon: “When I got the keys I walked in wearing a new pair of trainers, and the floor was so sticky it ripped the sole off my shoe. I sat there and wanted to cry.”

Along with Lee’s mum Ann, the pair worked morning till night for five months, before opening on 28th November, 2008. “We didn’t have a stitch to our name. But in the first day we had a hundred customers, and it grew from there.”

Sadly Michelle became unwell, tragically succumbing to cancer at the very young age of 29: “We had grown up together,” he says, quietly. “She had everything going for her. And she took it all in her stride, 110% fought it.”

ast forward to 2018 and the deli-café is well-known as one of NW5’s most friendly; in fact, I can’t even think of another that rivals its sheer, undiluted neighbourliness. If you’ve never visited, pitch up by yourself and hang out with other locals. “Everyone that comes in,” says Lee, “whether by themselves or not, if they sit at the table, nine times out of ten they’ll start chatting to the people next to them.”

A hybrid of grocery store, café, pop-up restaurant and cocktail-bar, on the one hand Truffles is a treasure trove of desirable things for the kitchen, with its enviable shelves of wines, biscuits, jars, oils and fancy tins. On the other it’s a place for lunch, drinks or even dinner: the counter displays three glistening bowls of fresh pesto, and an assortment of olives, pastas and salads.

Sliced, cured meats and an array of Italian, French and British cheeses are to the right, while bottles of Campari and Aperol sit on the counter-top awaiting aperativo hour (at weekends the deli mutates into a bar till 10pm).

It all happens, however, around the central high table, with its slightly awkward tilting stools, where we chew the fat on a stuffy autumn afternoon, punctuated by a stream of customers, from local actors to journos, authors and restaurant owners, all with their own special relationship with Lee and Ann, also behind the counter. Both greet and chit-chat tirelessly, the coffee machine on a constant whir.

Lee’s naturally proud to reach a decade doing something he loves: “my work life is my life,” he says (as well as celebrating ten years, he’s also turning the big 4-0 this month). He takes care to credit his mum’s decade-long service to the shop as “a labour of love”, too.

As we eat, ever-knowledgeable Lee talks us through the provenance of each item with remarkable thoroughness. We start with antipasti: salami with fennel, another cut through with black truffle, and rosemary prosciutto slow-cooked for ten hours. There are two types of goat’s cheese, as well as silken Mont D’Or Vacherin, roasted peppers, marinated artichokes, seared courgettes and sweet-spicy chilli peppers.

The pasta proves as good as any more expensive Italian, and a snip at £6 a bowl: Tuscan truffle sausage with n’duja, tomato and basil is all umami thwack, while thin, twisty trofie is made in-house with burnt peppers, roasted tomato and spinach. They also make orecchiette, cavatelli and spaghetti.

Arguably tastiest of all – although being seasonal it won’t be on the menu much longer – is a bowl of panzanella: red, green and yellow tomatoes, shards of parmesan, silvery anchovies and basil. Delicious with a crisp Spanish Ribeiro; in fact, by-the-glass wines are mostly a fiver a go.

But it’s the sugary treats that drive some through the door. Sipping a Peruvian-bean double espresso, I bite into a home-made donut, a passion-project that Lee gets up especially early at weekends to bake: light-as-air, it oozes a rich and generous chocolate fondant filling.

Time for a walk on the Heath. In case you’re wondering, Lee still appears in the odd Hollywood blockbuster – he was filming at Kenwood House the day after our chat – as well as offering festive carriage circuits round NW5 on Sundays before Xmas. So really, it’s a case of courses and horses.

Three things to check out at Truffles Deli

Adam and Lee
This Sunday daytime pop-up is a collab between Lee and chef Adam Hardiman. Running every fortnight (check Instagram) the menu features half a dozen sharing plates, and it’s taking the area by storm: “We did about 7O to 80 covers last time,” he says beaming, cooking small plates of smoked beef doughnut, confit chicken and wild mushroom Arancini (all between £5-11.50).

“Adam’s the pro-chef and the twist is I’m a home cook,” he adds modestly. “The prep is wicked, we take our time: yesterday we shredded lobster and served it with cooked n’duja, crème fraiche and bisque poured over the dish at the table.” On our visit, we sample delicate slivers of beetroot and gin-cured salmon, before a hearty lamb pie, its flaky golden pastry packed with fragrant rice, peas and eight-hour slow-cooked shoulder, with the lightest curry spices. A sweet mango puree adds fruity contrast.

Pizza Fridays
Every Friday night a bit of sweltering Naples comes to York Rise. “We make our own dough, it’s enriched, we keep feeding it,” Lee says. “We braise our tomato sauce – you can top it with anything out the fridges, from Buffalo mozzarella to salami – before cooking them in a little woodfired oven out the back. And we do a negroni for £7.” We can vouch for the quality of them, too (see above pic).

Humpday Ragu
The latest idea at Truffles is a #humpday special night – “God, I hate that word!” Lee says, beaming – of homemade pasta and ragu, both meat and veggie versions. It’ll be competitively priced for weekday cook-shy locals (ahem, count us in).

To celebrate their 10th birthday, Truffles (33 York Rise NW5) is offering readers a pizza and glass of wine for a £10 on Friday nights throughout Nov. Follow @truffles_deli on Instagram for more details about pop-ups.

Main image: Stephen Emms. This is the cover story of the current issue of Kentishtowner, still available across London from these places