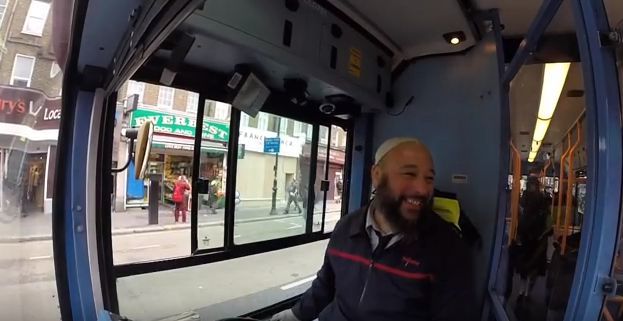 No sooner do we publish an extract by Elizabeth Wilson on London’s friendliest bus driver Ahmed Serhani (from author Travis Elborough’s new anthology Bus Fare, see below) than we get an email from a documentary maker who has just shot a six-minute film with the fella. Coincidence or what?

Local film-maker Joe Bloom’s documentary, funny and touching by turns, acts as a useful intro to those unfamiliar with the smiling face of the 214 (and formerly 274) bus driver. For the uninitiated, the 214 scoots across Highgate and down through Kentish Town to Camden.

Titled ‘Ahmed Serhani, A Portrait’, the doc mixes frank chat about life, loneliness and having a positive state of mind with footage shot in Kentish Town of Ahmed beaming and waving furiously to regulars and new passengers alike. Its honesty will actually stop you in your tracks.

“To me this is the best job in the world,” says Ahmed towards the end. “Let tomorrow happen, and let tomorrow be.”

Bloom reckons his is “an important film for London, and the country as a whole in regards to spreading the message of the importance of togetherness and cohesion.”

And, as Wilson says in her essay: “It was always party time on Ahmed’s bus; a celebration of everyday life. Often on other buses I saw my fellow passengers lost in careworn indifference or retreated myself into glum introspection. Then the bus ride dwindled to an empty interlude between two places, one of life’s intermissions. Ahmed brought the bus ride alive and with Ahmed at the wheel every moment was worth living.”