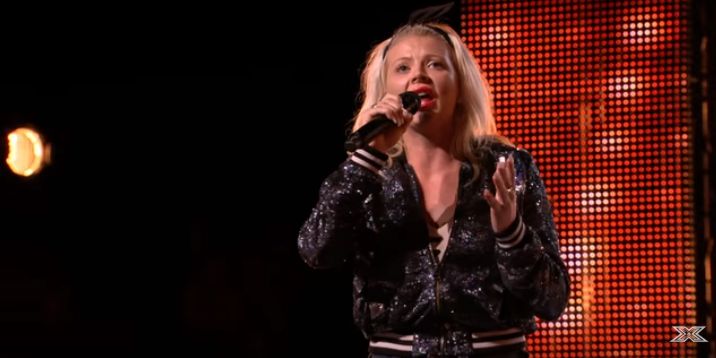 She's run the much-loved flower stall by the station for half a decade. We find out what will happen if she wins

You know who she is – super-smiley in all weathers, right under the canopy, surrounded by blooms.

Back then she charmed readers with her handwritten answers for our popular Ich Bin Kentishtowner column (enjoy it in full here).

Fast forward half a decade and imagine our surprise when we saw her popping up at the X Factor auditions last weekend, in front of judges Robbie Williams, Simon Cowell, Ayda Field and that bloke from One Direction.

As you’ll see from the below clip, she wooed them all (even Cowell) with her powerful version of James Arthur’s Impossible, not to mention cute intro about being from Camden Town (and running the flower stall, of course). After the performance, the audience – and some of the judges – rightfully gave her a standing ovation.

We grabbed Natasha, who was brought up in Queen’s Crescent, for a few words.

“For years I’ve been told to try it out,” she says, “especially by a local DJ Phil Clifton. I never had the guts, but this year found the confidence to make a music video, which gave me a taste of what to expect trying to crack the industry. I’ve always watched the show and felt it was my time to have a go.”

Since the performance was aired on ITV, Natasha has had an “amazing” response. “Messages and tweets have flooded in even from countries like Colombia and Brazil,” she says. “I’ve even been approached on the streets for photos. And cards have been dropped at the stall by some of the local children wishing me luck. I’m over the moon with how well I’ve been received – and hope to keep impressing the nation and judges to go all the way.”

And finally, would the much-loved stall carry on if she wins? “Yes,” she says, “but I’d have to pass it down the line to someone in my family if it comes to it. The stall has given me life skills and great opportunities which I will never forget, and I’d love to be able to give someone else the chances I had by passing it on. It’s a very hard living which requires commitment day in, day out, come rain or shine. I hope I could do both, but I wouldn’t be able to physically. I’d still make regular appearances at the stall though – it’s home for me.”

As for Robbie Williams comparing her to Amy Winehouse? “I can’t believe I’ve been compared to an absolute legend,” she says, beaming.

Go gurl. We’re rooting for you all the way.