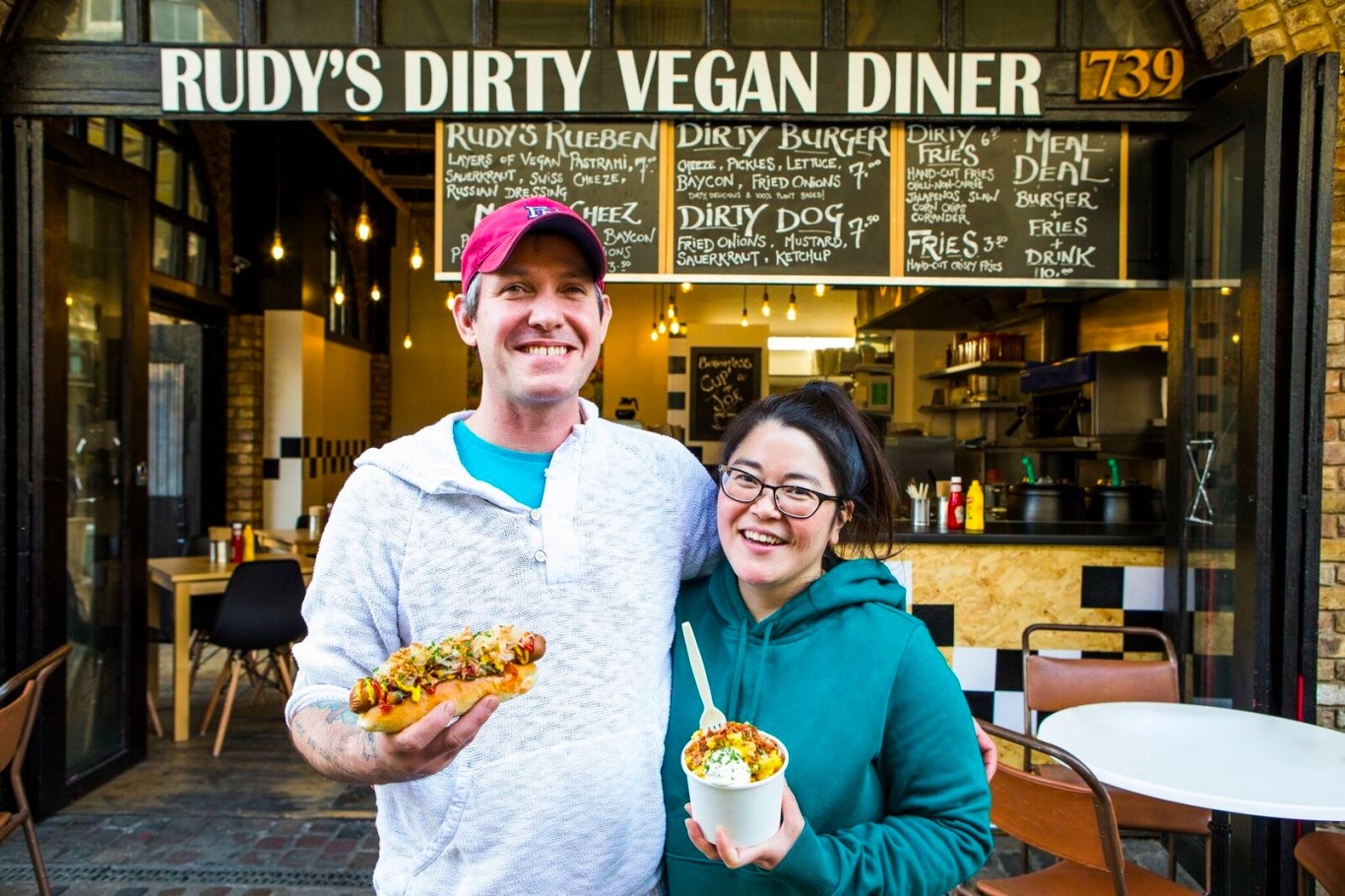 What’s happening there now? It’s an all-vegan fast-food diner, joining the entourage of game-changing local plant-based joints like the Fields Beneath, Young Vegans and Magic Falafel.

Who runs it? Former American primary school teacher, Ruth (Rudy) Mumma and vegan chef, Matthew Foster. The pair decided that a diner would be the perfect place to combine their passions: Matthew’s know-how on all things V and Ruth’s first-hand knowledge of US diner culture and experience with educating kids.

They hope the chilled atmosphere and comfort food will provide the perfect opportunity to teach people – and kids in particular – about veganism. An open kitchen allows customers to engage with the process, be it by watching the flipping of seitan patties or seeing what the hell goes into a vegan wing. We suggest pulling up a stool at the bar: it’s the ideal spot to piece the plant-powered puzzle together.

What’s it like in there? It would be a tad seen-it-all-before monochrome and bare-brick, were it not for the striking painting donated by acclaimed vegan artist, Lynda Bell. It depicts an angelic-looking nymph clutching a baby cow, surrounded by wide-eyed fledgling animals. Something to gaze upon while you smugly scoff down those dairy-free delights.

So what should I try? The Rudy’s Reuben club is a must. The seitan pastrami is nearly inseparable – in texture, taste and aesthetic – from the porky original, the result of an arm-ache-inducing amount of kneading, followed by a slow braise in a black pepper, coriander, mustard and beetroot (for colour) stock. It’s stored like a big fat chorizo and sliced wafer-thin, with a succulent dollop of sauerkraut and Swiss cheese. It’s all meticulously constructed by Matthew and placed between two slithers of crisp-off-the-grill rye bread. Easily the healthiest dirty pastrami sub in town.

What else? The soy-based burger is as moist as we would hope. Accompanied by flavoursome ‘baycon’ and offset with hefty slices of pickle and juicy fried onions, it sits between two fluffy pillows of brioche bread, made with aquafaba (an egg white substitute which, fact-fans, is comprised of the brine found in a can of chickpeas).

Anything else? “Matthew is incredibly experimental,” says Ruth, “even I’m still surprised by the recipes he comes up with.” Keep an eye on the constantly rotating list of specials and comfort food: meatloaf, philly cheese steak, spicy buffalo wings, and vegan milkshakes coming in next month. Oh, and mac’n’cheese is slightly al dente, sprinkled in crispy fried bits of baycon and onion.

What’s the service like? The enthusiasm here for plant-powered grub is palpable: they’re as happy to show you what a pre-prep slab of seitan pastrami looks like, as they are to big-up their other fave local vegan spots (What The Pitta on Bayham Street is highly tipped). In fact, they have the same warmth you’d expect from dropping into a little family-run diner just off Route 66. No surprise the place was packed-out at the one o’clock lunch rush.

Do say? “What’s in your meatloaf?”