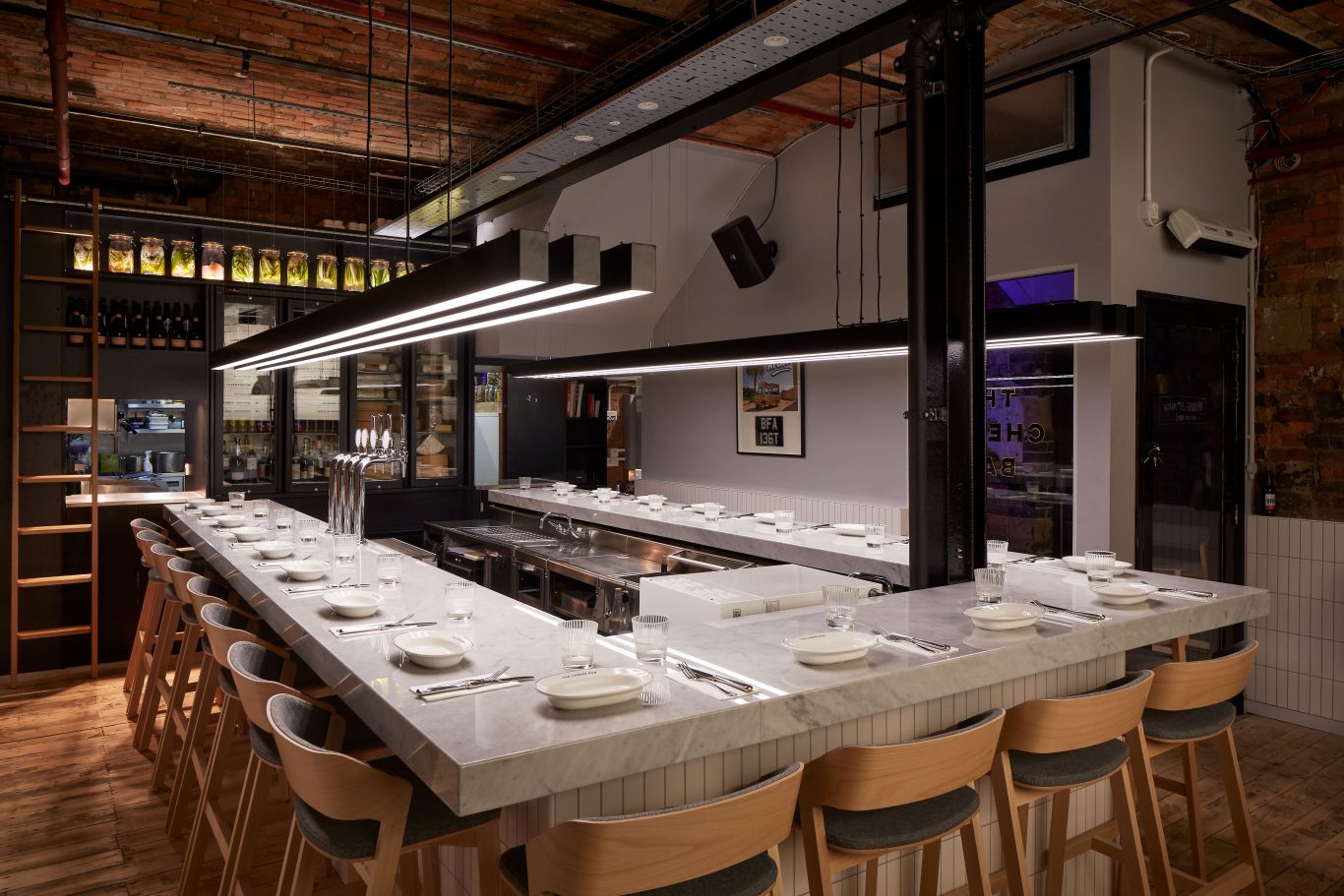 Elegant, addictive and uncompromising - there's nothing, um, cheesy about this place

Even though it’s right opposite our office, it took us a few weeks to actually walk in. That might be ‘local pub syndrome’ – y’know, where that lovely twinkly place on your doorstep never quite matches your mood.

When we finally gave the Cheese Bar a chance – a sunny Tuesday night after work – it was full, inevitably. That was another reason why we had dragged our heels: the queues. At peak eating hours they snake outside onto the Camden cobbles.

But what the Wensleydale is the fuss about? In 2014 Matthew Carver and his converted ice cream van set out to celebrate British cheese by making the best toasted sandwiches he could. Fast forward three years, and a recent crowdfunding campaign saw his target reached in five days.

The new gaff subsequently opened in the shiny Grade 1-listed foodie quarter of Camden Market in March. The interior is as stylish as its bedfellows like the Flour Station bakery: these buildings scrub up so well. There’s a posh marble-topped bar, exposed brick walls and floor-to-ceiling display fridges housing thirty British cheeses, twenty craft beers, plus a small selection of wines. Our Nero D’avola was a decent £21.

So what’s on the menu? It’s fairly short, and potentially baffling to the light fromage enthusiast. Carver and team make a point of championing a new breed of urban cheese makers, crafting as much produce as possible within the M25, and a back wall lists and explains those used in the dishes, so you can work out which flavours you fancy trying. Sure, it’s uncompromising – but wholly admirable.

There are a dozen actual grown-up sharing plates (as well as grilled cheese toasties, better suited for lunch or a pre-gig snack), with hot and cold choices mixed up.

A Marmite Malakoff is a must, a golden brown breadcrumbed ball of fried cheese on a swirl of nutty red pepper romesco sauce. We simply adored a good chunk of musky truffled Baron Bigod from Suffolk too, served with pickled walnut and crackers with a real crunch.

Burrata, from Acton (really!) exploded at the touch of a fork, its gooey mess blending with zingy basil oil and juicy new-season tomatoes. And potentially best of all, a Stilton-esque Young Buck (from County Down) raclette was a sturdy iron dish sticky with potatoes, salt beef strips and burnt leeks: sweet and unctuous – and a match for the spicy southern Italian red.

The servers recommended four or five dishes to share. Four is enough for two, especially with a side of sourdough.

On our first visit service had that slightly frustrating hit-and-miss quality – so we returned a week or so later on a sunny lunchtime and it was much improved. We tried a few more dishes (as well as another slice of the fabulous Baron Bigod): sticky dipping fondue with smoked sausage, a crisp Waldorf salad for fruity contrast and another signature dish, an indulgent four cheese rotelle, a take on mac ‘n’ cheese starring Ogleshield, Mrs Kirkham’s Lancashire, Brue Valley Mozzarella and Old Winchester.

And the soundtrack of superior 1990s club tracks, emanating from a crystal clear sound system, was as (surprisingly) conducive during the day as on our evening visit.

In short? There’s nothing gimmicky – or, dare we say, cheesy – about this place. It has to be the finest addition to Camden Market in recent memory.