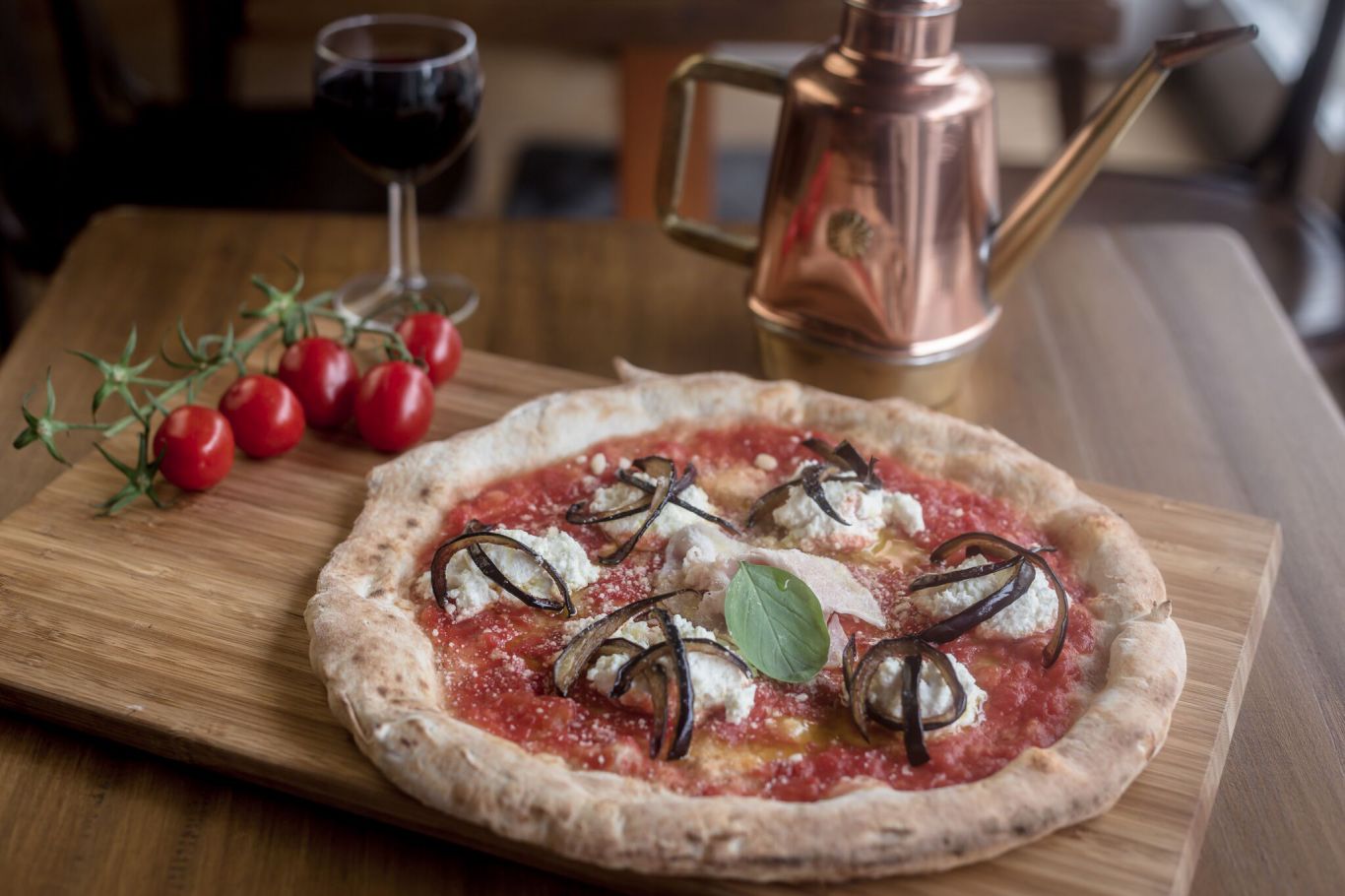 Royal College Street is one of the area’s long unheralded thoroughfares – but there’s always plenty going on, from contemporary art space the Cob Gallery to the diminutive Casa Tua.

Right opposite the new Ethiopian coffee specialists, Buna Oromia, who have just relocated from Brecknock Road, is the small but stylish Pizzeria Di Camden, on the site of a former pizza takeaway. First thoughts? Regard that lovely hand-painted signage (see above pic). Very nice.

Conceived by Jose Pacheco and Sanaa Ahmed, the latter who has just spent two years managing the hit (and Michelin-rated) Honey & Co on Warren Street, it would seem that this pair know their onions.

The aim? To deliver traditional Neapolitan pizza modelled on 200 year-old traditions, and provide “everyone with the freshest ingredients sourced locally and from Campania.”

Find out more about video ads for your business
“It really did begin with Naples,” says Burgundy-born Sanaa. “My partner Jose and I visited on one of our first trips together. Immediately we became completely besotted by the city and its food.”

Backed with years of hospitality experience and training in the best pizzaiolo academy in Naples, Sanaa and Jose are even being mentored by master pizzaiolo from Naples, Cristiano di Rinaldi, who has a slew of national and international pizza-making championship titles. So far, so impressive.

What to expect at Di Camden? San Marzano tomatoes, D.O.P buffalo mozzarella and Caputo ‘00’ flour, for starters – and a stone-baked oven that does the business in about sixty seconds.

We popped in late one Wednesday night when the small but charmingly minimal restaurant, with open kitchen, wasn’t busy, but there was a steady stream of both eat-ins and takeaways.

This part of Royal College Street has something of a downtown vibe, especially with the door open onto the street. And the dining room – just a few tables and unadorned walls – manages to be atmospheric, hip and welcoming at the same time.

The dozen or so pizzas are listed simply, with ingredients written in both Italian and English. Sanaa smilingly explains that ‘fior di latte’ is “the best mozzarella” you can get: made from cow’s milk it’s actually cheaper than the buffalo variety, but better for the stone-baked job in hand.

Simply put, the flavours are exceptional. Of the two we shared, the highly aromatic Patata (£8) impressed most. Sometimes a tomato-less white pizza can prove unattractive in the eating, but here the base is laden with potato slices, onion, mozzarella, parmesan – and, most noticeably, the deeply fragrant and resonant hit of rosemary.

The other, a more conventional pairing of broccoli and sausage (£9) still yielded a really fiery meatiness, matched with the tang of those authentic bittersweet plum tomatoes that many consider the best in the world. The bases are less doughy than, say, new Kentish Town opening Franco Manca – and delicious when dipped in the two oils, of which the chilli is best.

What else? Generous salads, including a mixed side with cherry tomatoes and parmesan, and a posher option with artichokes and grilled aubergine.

Oh, and Sweet-toothed will be all over the desserts: a moist slice of carrot cake happily didn’t look anything like coffee shop versions; even tastier was the lightest tiramisu in the postcode.

The pair want to work with local coffee roasters and vegetable suppliers, as well as partnering with schools and hospitals. It makes sense, considering they’ve lived in Camden for ten years, after all.

So in short? A genuine community hub – expect queues around the block.

This is box title
We paid £21.50 for two pizzas and a side to share. An alcohol license is imminent but for now it’s soft drinks only. Open daily at lunchtimes till 3pm and from 5pm till 1030pm, 195 Royal College Street, NW1. More info here