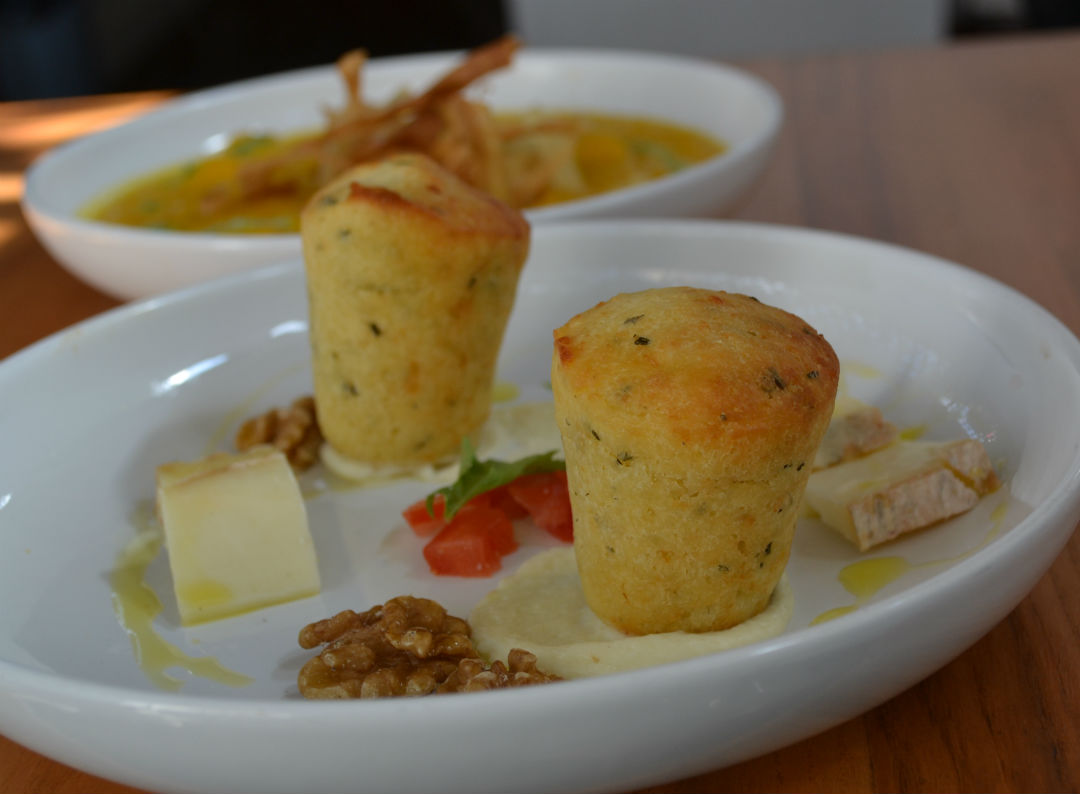 Kentish Town Road has been known to confound expectations. Just ask those incensed locals who jumped to the defence of this deceptive high street after its recent mauling in The Economist.

New arrival Anima e Cuore doesn’t fit any of the lazy received wisdom either. It’s not one of the pound shops we’re told dominate, neither is it a subterranean speakeasy or frothy coffee bar – which also exist if you take time to look.

Perhaps that’s why locals have largely considered it simply a useful new ice cream shop (which we raved about here), without investigating the sensational menu on offer for those that look beyond the distracting array of gelatos and sorbets.

Inside is small and long, a counter laden with geometric platters of macarons making it tighter still, while hinting at the fact that this is no yawnsome panini joint.

We followed through the windowless dining room to the back garden, a narrow oasis, to consider the menu of rustic pastas and house specials.Here’s the surprise: the dishes possess a range of tastes and textures that would suit a terrace just as much as one within earshot of the yappy dogs of Castlehaven Road.

The day’s chalked-up starter was a humble carrot soup, but here the vegetable appeared in no less than three guises, the velvety broth studded with carrot gnocchi and topped with crispy carrot strips. Not your average lunchtime chowder.

Meanwhile, a rosemary baba – a muffin-like bread which takes 48-hours to prove, rise and infuse (see main pic, above) – delighted in its parmesan richness, enhanced by a mousse of taleggio with walnuts upon which it came so daintily perched.

As regulars sat down to plates of just-made ravioli (al dente pillows of creamy sage and ricotta on this particular lunchtime), we pondered the problematic narrow space, at odds with the ambition and talents of school chum owners Alessandro and Mustapha, who’ve had stints at Michelin-starred joints like Le Gavroche, Cecconi’s and Sketch.

From the shiny signage to reclaimed 80s office furniture, Anima looks like a modern, decent Italian café, complete with above average classics such as the tangy lasagne or a rich, balsamic aubergine parmigiana, served with a touch of overzealous microwaving. Yet swerve the lunchtime staples and the boys will take you almost incongruously deep into Italy’s gastronomic tradition.

Our highlight? A nest of linguine with ceps, rich with satisfying earthiness. While gobbling this down, we also envied the neighbouring table’s veal ragu – firmly on our must-try list. In fact, you’re hard pressed to spend more than £20 on a serious lunch here, if the contradictions don’t phase you.

Squeeze in a mascarpone and ricotta cheesecake topped with fig ice cream might – a high end West End-style dessert at half the price – and you’ll need the very potent robusta hit of the Caffe Diemme (supplied by Doppio up the road, naturally) to get you through the afternoon. Oh, and perhaps a macaron or two.

As the name suggests, the chef-owners have poured heart and soul into this place, and while it feels like there is more work to be done on the unyielding café space – particularly with the oncoming winter limiting use of the garden – the ever-changing daily menu is more than worth repeat visits.

This is box title
129 Kentish Town Road NW1, open daily until around 10pm. Unlicensed. Lunch from a fiver upwards. Most mains are between £5-10