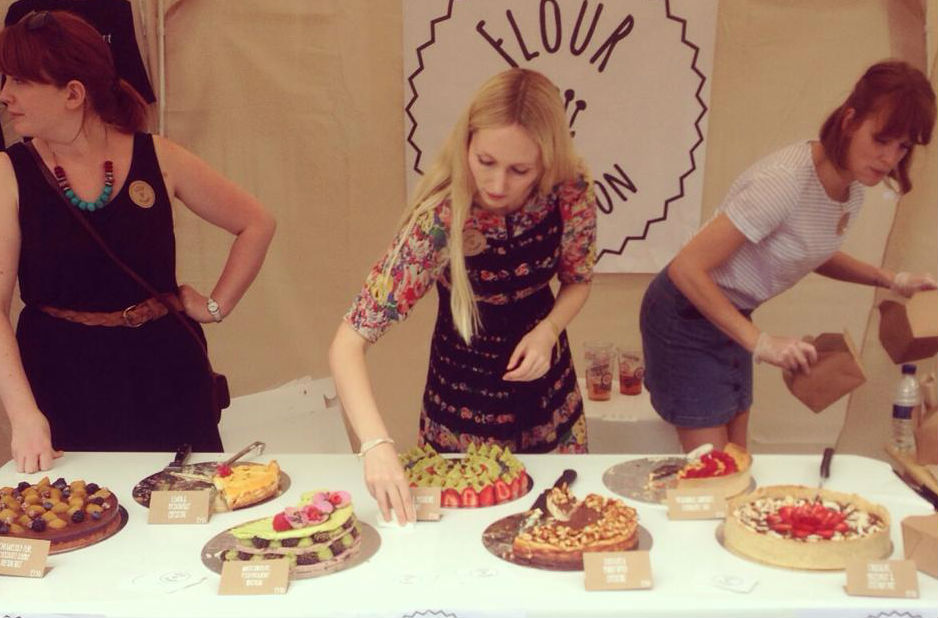 A year or two ago, readers may remember my Patisserie Diaries, in which I recounted a dramatic thirtysomething career change from journalist to pastry chef.

Since then I’ve been baking like crazy and my Flour Of London brand is happily starting to make a bit of name for itself. In fact, we had a great day at this year’s Alma Street Fair – and it’s always something of a relief when our cakes sell out quicker than expected.

In this first of a new column, I want to talk about brambling. Yes, really. If you’ve never done it before, but have always been a little curious, now’s the time (although you should have until October before the season ends).

The word comes from the common-Germanic root bræmaz meaning prickly, a term anyone who’s picked blackberries will be familiar with; and right now, they’re ripe and juicy. So, if you think you’re hard enough – and don’t mind purple fingers – there’s seriously satisfying foraging to be done. And a small fortune to be saved while you’re at it.

Incidentally, did you know the ancient Greeks used to harness the power of blackberries for medicinal purposes? They’re brimming with flavonoids, a type of antioxidant that gives them their dark colour, and were used to treat gout. Plus they’re  great for the skin, with high levels of salicylic acid.

Finding bountiful crops isn’t as tricky as you might believe: just pick a likely location and chances are you’ll find a few. But if you’re looking to harvest a bumper crop, then try these hotspots (keeping an eye out for elderberries and sloes in season too):

Regent’s Canal
The Canal and River Trust encourage foodies to forage the 2000 miles of canal network they care for, even coming up with a recipe for Regent’s Canal Jam, of towpath-foraged fruits such as blackberries, sloes and crab apples.
Hampstead Heath
If you’re sans dog and looking for a more purposeful ramble on our beloved Heath, then what better excuse to go off the beaten track than for a bramble?
Walthamstow Marshes
One of the few remaining semi-natural wetland in Greater London, the marshes are a tranquil 90-acre mecca for foragers with guaranteed blackberry pickings.

If it’s clinging to the bush, it’s not ready. A ripe blackberry requires the gentlest pluck – under-ripe and it’ll be on the acidic side.
Avoid road-side fruit as they may be polluted by exhaust fumes. Best to skip the low dog-sprayed and high bird-pecked fruit too.
For thorn protection try one heavy-duty glove for holding thorns at bay while the glove-free hand can pluck away without risk of squashing the berries. For serious protection, armour up with drink bottle gauntlets; cut the neck of your bottle off and feed your hand through.
Plastic containers are best for safely transporting bounty. Plastic bags on the other hand tend to end in a bit of a berry mash-up.
Don’t overpick and just take what you need. While blackberries freeze well, don’t be greedy leave plenty for others too.

Had enough of blackberries? There are other resources to guide those keen to forage more: Fruit City has a brilliant interactive map of London that foraging fans can add to, pinning anything from an individual pear tree with branches overhanging a public pathway, to a glut of elderberry bushes in the corner of a local park. If you’re keen to learn more there are several foraging gurus operating in London, with seasonal classes on everything from fruit and nut walks to mushroom and salad hunting. Try Forage Wild Food and Forage London.

Firstly, it’s wise to wash the blackberries thoroughly. An easy way without damaging them is to put them in a colander, then submerge in a large bowl of cold water. A gentle swirl will suffice before draining the water, which will be littered with hair-like fibres and the odd bug, then repeat until clean. If you’re not using the berries immediately, they freeze brilliantly. Lay them out on a tray in a single layer with enough space so they’re not touching and place in the freezer. After a few hours they can be decanted into a container for more compact storage. This simple little layered dessert can be put together just before serving.

1. To make the compote, whizz two thirds of the blackberries with the sugar, lemon juice and cinnamon in a food processor until smooth then sieve to remove the seeds. Add the remaining fruit to the purée and set aside. Use within 2 days or freeze.
2. For the limoncello cream, combine the whipping cream, mascarpone, 20g caster sugar, and limoncello in large bowl. Beat until soft peaks form and set aside.
3. To make the crumb topping, rub the butter into the flour and sugar until it resembles chunky crumbs. Stir in hazelnuts then scatter on an oven tray and bake for about 5-10 minutes or until golden and crisp. Cool before using.
4. To assemble the desserts simply layer the three components as you like and serve.

Who doesn’t remember the jammy dodger? This is a delicious and easy take on the now retro treat and dare I say, better than the original.

1. Place a testing saucer in the fridge before adding the blackberries, sugar and lemon juice to a large pan. Heat on low until the sugar dissolves then turn the heat up to bring the jam to a roiling boil, keeping it there until you reach setting point of a 105C, approx. 7-10 minutes.
2. To test the setting point without a thermometer, blob a teaspoon of jam onto the cold plate, once cool run your finger through and if it doesn’t run back on itself the jam is ready.
3. Once ready, skim off surface scum then leave to cool for 15 minutes, before pouring into sterilised jars if keeping.
4. To make the biscuit dough, blend all the ingredients in a food processor until the dough comes together. Remove and shape the dough before wrapping in cling film and pop in the fridge for an hour.
5. Line two large trays with baking paper before rolling out the dough out on a lightly floured surface to 3-4mm thick. With a 6cm cutter cut out rounds, rolling and cutting the leftover dough till you have 18-20 rounds. With a 2cm cutter, cut out the insides of half of the rounds to make the tops of the dodgers.
6. Place the rounds on the baking trays and chill for half an hour. Preheat the oven to 160C then take out the chilled biscuits and add half a teaspoon of jam to the centre of each base, spreading it out slightly before adding the top half, pressing gently around the centre so the jam comes up the middle.
7. Bake for 20-22 minutes until lightly golden brown and sprinkle with caster sugar as soon as they come out of the oven. Leave on the tray for 5 minutes before carefully transferring to wire racks to cool.

Makes 12 tarts. A cheeky mini blackberry take on the classic raspberry version. Works deliciously with the almond cream and perfect with a cuppa.

1. Put the flour and salt in a mixing bowl, add the cubed butter and with both hands, lightly push the butter and flour between your fingers and thumbs as though dealing a pack cards. Keep rubbing the flour and butter together until the pieces are the size of your little fingernail; any more and it will over work the pastry.
2. Stir through the sugar, add the egg and bring together with a spoon or preferably a plastic scraper, mixing till the dough starts to come together. Tip it out onto a lightly floured work-surface and continue to work the dough, pressing it between your fingers and thumbs before folding over and repeating until the dough resembles plasticine. Wrap in baking paper and chill for at least an hour.
3. On a lightly dusted surface roll out the pastry, turning each roll and flouring where necessary to prevent sticking to a 2-3mm thickness. With a round cutter, 2.5cm larger than the tin holes cut out 12 rounds before carefully lining the tin. Chill again before blind baking to rest the pastry for at least 30 mins
4. Prick the pastry lightly before lining with baking paper, adding baking beans and then blind baking for 15-20 minutes at 180’c till golden brown. Leave to cool.
5. To make the frangipane, put all the ingredients in a bowl and beat together until combined. Transfer to the fridge for 15 minutes to chill.
6. Preheat the oven to 170C before spooning half a teaspoon of blackberry jam into each pastry case before topping with the almond cream and smoothing flat and baking for 20-25 minutes until the frangipane is risen and golden.
7. Cool in the tray for a few minutes, then transfer to a wire rack to cool completely before icing. Mix the icing sugar with a little water to form a runny paste, and spoon over the tarts before topping with a few blackberries to decorate.