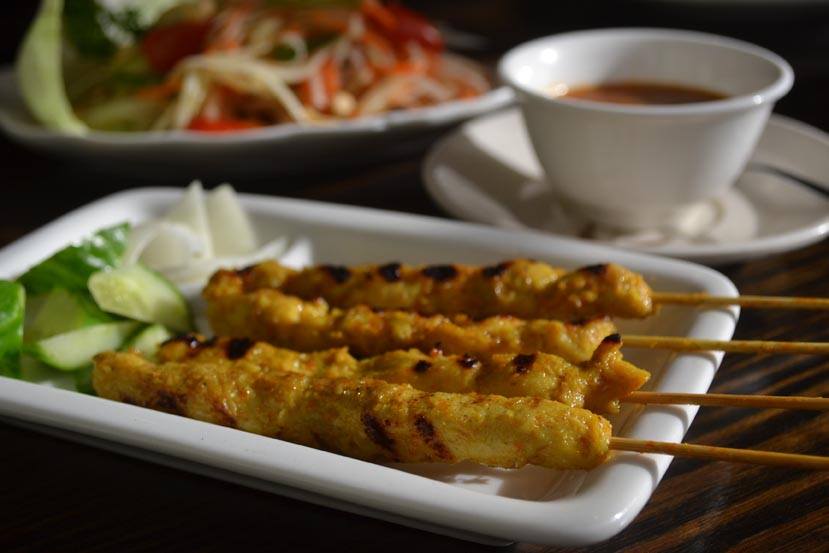 Discovered this tasty Thai canteen yet?

For a cuisine done such a disservice in pubs across the country, decent Thai food remains a taste sensation – if you can find it. So what’s it like at this unassuming spot on Fortess Road?

As we slid onto one of its long, Wagamama-style communal benches, Baan Thai felt at once very familiar. More than a decade ago, I used to squeeze along these same shared tables regularly, drawn by the large and relatively healthy bowls of spicy soup, an oasis among the area’s otherwise strictly egg ‘n’ chip-based lunch options back then.

Eat Zone was K-Town’s very own stripped back Hoxton Square-style noodle joint, and so it remained for many years after our office (and those gossipy lunchtimes) moved elsewhere. That was until a rumpus with a gang of hammer-wielding assailants forced its sudden, vaguely mysterious closure in 2011.

An affable young Thai/Malay couple took over the vacant spot a year ago, and have gone about softening the décor somewhat, adding colour where once sheet metal prevailed, while keeping the buzzy canteen vibe of those benches. They brought with them a more traditionally Thai menu, with a scattering of Malaysian dishes, a mix that befits their union.

We speculated – while pawing through the dauntingly-sized menu – that many locals with little call to stray up Fortess Rd on foot probably haven’t noticed the place has even changed. It’s rather concealed from the road by an advertising-heavy bus stop. Others may have brushed it off on the grounds that another green curry ‘n’ pad Thai joint isn’t somewhere obvious to note.

Yes, Thai food as a brand seems to have been unavoidably tarnished by the 90s explosion of pubs offering awful ‘authentic’ menus made up from frozen spring rolls, packet mix curries and ketchup-drenched noodles. The national dishes have joined the uninspired ranks of tikka masalas, donners and chow meins along the generic UK high street.

But with a very experienced matriarchal chef in the kitchen here, Baan Thai’s sprawling menu certainly isn’t noodle-by-numbers. Our starter salad of Som Tum Thai (£6) was a palate-cleansing hit. The simple crunch of papaya and green beans, generous amounts of peanuts and lime drizzled cherry tomatoes, plus pleasingly fiery fresh chilli, made for an opener that was easy to finish, without instantly, regrettably ending up too full.

Chicken satay (main pic) was also ultra-tender and moist, the owner challenging us as to whether we’ve tasted better at the hawker centres of Singapore. Two ice teas were also produced that were certainly very authentic to Asia’s bustling 4am street food bonanzas. Brightly coloured and swirling with milk, they proved overly sweet for our untrained tastebuds, and we gravitated back to mopping up the final morsels of citric sour spicy salad instead. Yum.

Equally zingy and dreamily light was steamed seabass fillet (Pla Nueng Manow, £8.50), which if served over simple boiled rice would surely be one of the healthiest, most tasty quick meal options you could hope to find anywhere. The fish came swathed but not drowned by invigorating lemon, coriander, and finely diced chilli.

Deep fried squid was lightly battered, and light on the tooth too, while a deep bowl of laksa (£6.50) offered the heartwarming infusion coconut and lemongrass, although did not particularly thrill beyond that. The helping, including unconquerable amounts of rice vermicelli is another one to remember for less altruistic quick meals though.

A bottle of white Monsoon Valley wine, from the country’s Hua Hin Hills Vineyard, was an easy pairing with all we ate. Exploring a splash of Thai wine makes sense here, even if the benches don’t lend themselves to drawn out, two-bottle dinners. We were intrigued to see that Red Bull are the vineyard’s UK importers too, their love of Thai drinks obviously not confined to the medicinal bottles of the original caffeinated hard stuff.

Of course we had to try the benchmark pad Thai (£7), which proved to be anything but generic. It came encased in a striking lattice of egg, a new presentation on me, and tasted equally district. The sauce was a darkly tamarind-heavy brew, and after the zesty flavours so far, took things into a burnished and pleasantly rich direction.

For dessert, we delved deeper still into the region’s quirky, vaguely intoxicating produce, sampling durian ice cream. You can read all about that experience here.

Baan Thai is serving honest food; well-priced and bursting with fresh, if not entirely unfamiliar flavours. The canteen vibe is ideal for an impromptu visit, or order a delivery for a healthier, far zestier alternative to the heavy Chinese take away staples.

And we dare you to sample the durian ice cream.