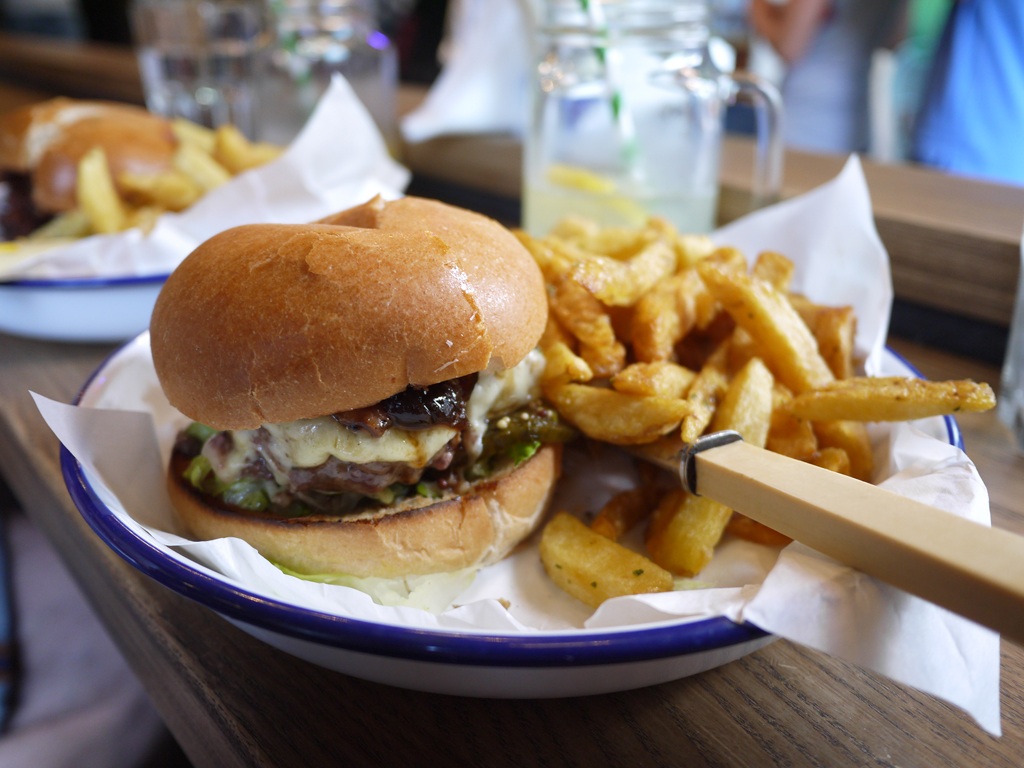 Firstly, it’s pretty much a carbon copy of its big Brixton sis with an identical huge black board menu on the wall.

The house burger was supposedly medium but came fairly well done; and still tender. It was sandwiched in a glazed bun with a delightfully sweet red onion relish, slices of gherkin which cut through the savoury flavour nicely – and a naughty piece of bacon.

Burgers often start looking fine but after a few bites, gherkins become dislodged, hands coated in cheese. Not the case with this one. It was neat, every ingredient staying in place, with the bun resisting sogginess even after a generous squirt of mayonnaise and ketchup.

Our only qualm? Rosemary chips. When tried them in Brixton, they were everything a fried spud should be – fluffy and crispy – but in Camden they were drenched in oil and had turned grey by the last burger bite.

Find out more about video ads for your business
Vegetarians often get the raw deal on burger-focused menus, with faux meat or crumbly bean creations dominating, but this was not so much the case with the cauliflower and sweetcorn fritter. A tad bland, but to be fair, those ingredients are never going to explode with flavour. The coriander, yogurt and cucumber made it summery, and a dip in ketchup zinged it up a notch for a generally successful meat-free choice.

We hope Honest don’t churn out chain after chain because with their British meat and posh rosemary chips; it feels like they are doing something different on the burger scene. And no-one really needs another Byron.

Our bar table over-looked the snaking 20 people queue to popular market staple, Kim’s Vietnamese. A veteran to Camden’s food scene, she’s had her patch for over 13 years. Kim said that Honest Burgers arrival has been “great, it’s definitely brought more business for me”.

Well that’s good – but hardly a surprise. It seems the market’s reputation as tat-for-tourists is finally crumbling with the excellent daily street food market, superior coffee house Ruby Dock (from the people behind Goodge Street’s Lantana) – and now Honest, evidence that a Borough-style haven for quality food, which locals can enjoy too, may yet happen.