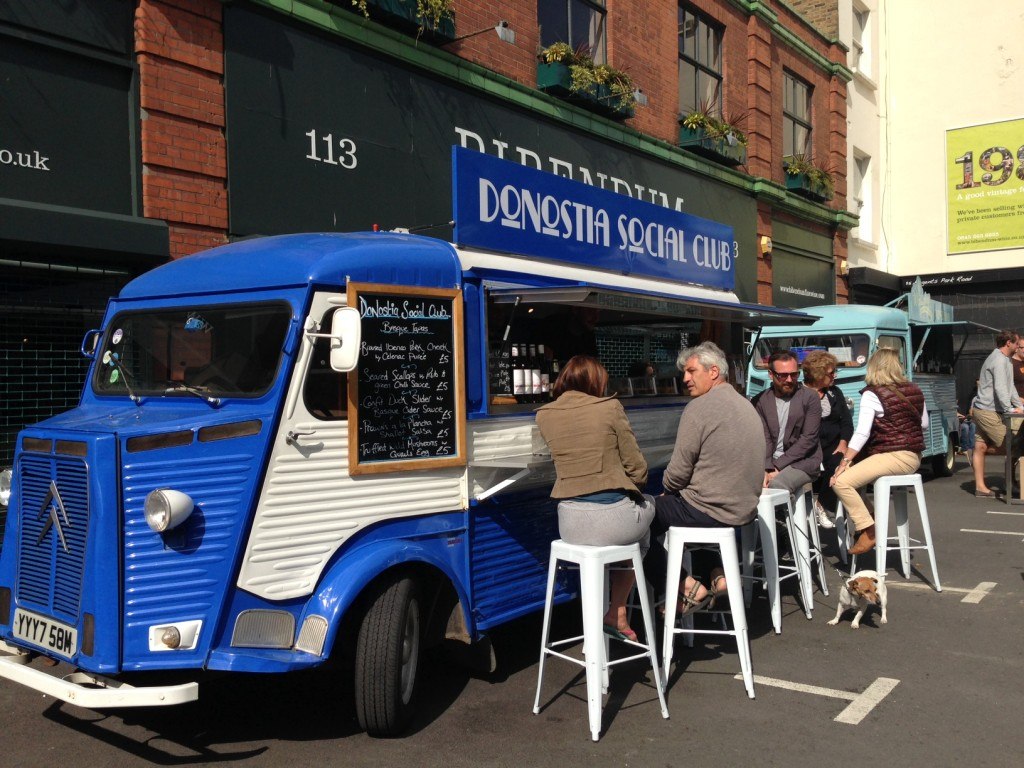 The best streetfood we've tasted in recent memory. The most stylish vehicle. And what's more, they're licensed too

If you’re a regular at Camden Brewery Bar, or KERB in King’s Cross, you might have come across what is now instantly our favourite streetfood van.

It’s a recent discovery, too. Walking our middle-aged Jack Russell through last Sunday’s Primrose Hill festival, we were arrested by a shiny blue 1940s vehicle outside Bibendum (whose own Wondering Wine mobile is, incidentally, also worth sampling).

It was barely midday – and we had just gulped down a double macchiato at The Little One – but nonetheless had to pull up a stool. The stylishly restored wagon opens out to form a nifty tapas bar with enough space for a dozen punters to perch at any one time. Called Donostia Social Club (after the Basque name for San Sebastian, the northern Spanish city) it’s like Barrafina on wheels. And, space being limited, it’s super-friendly, with punters all chatting amiably.

Donostia serves pintxos – as they call tapas up in that corner of the country – the flavours quite different from southern Spain, with a definite French influence.

Take the confit duck slider with Basque cider sauce: slow-cooked, tender meat with a creamy tang. Meanwhile, seared scallops were pillowy, a touch of fire from the green chilli sauce matching the acidic qualities of the pisto (tomatoes, onions, courgettes, green and red peppers and olive oil, a traditional dish similar to ratatouille). Braised Iberican pork, shouldering up to celeriac, that most earnest of vegetables, was a little too wintry for a mild September afternoon, although packed with earthy warmth.

But the best £3 you can spend on streetfood in north London? Morcilla with duck egg. Its creamy, melting texture (like the French boudin noir) took us back to our jaunt round the tapas bars of Andalucia earlier this Summer.

Finally – and we’d made ourselves pretty much at home by this point – a paper plate piled high with Basque salami, Catalan salchichon and Basque chorizo; and a splendid goat’s curd and Basque Idiazabal (a smoked sheep’s cheese).

A decent Tempranillo washed it all down. Yes, the fact that the van is fully licensed – so you can sample a variety of Spanish wines and sherries – makes the whole experience much more civilised; a place to linger. We were there over an hour, and when the rain inevitably came, an overhanging ledge meant we stayed dry. Clever, huh?

Head chef Paul has done time in the restaurants of the city, as well as running gastropubs in south London, and his experience shows. The quality and maturity of their concept is, in fact, the polar opposite of increasingly yawnsome streetfood pop-ups epitomised by kids trying to flip a few burgers while scribbling about provenance on a blackboard.

Which made us think: if these boys opened a slither of a tapas bar on the Kentish Town Road they’d clean up. Despite some excellent world food – Sicilian, Pakistani, Ethiopian, Indian, Japanese, Modern British – there’s still no Spanish joint.

So come on Donostia, we dare ya. Hell, we can even show you the perfect spot.

Donostia Social Club roams north London regularly: they’re next at KERB in King’s Cross on September 18, and in Primrose Hill on September 21/22 for Prim & Proper. Meal for two with wine around £40. Sharing plates £3 – £5. Kentishtowner Rating 8/10. More info here. Follow them on @donostiasc