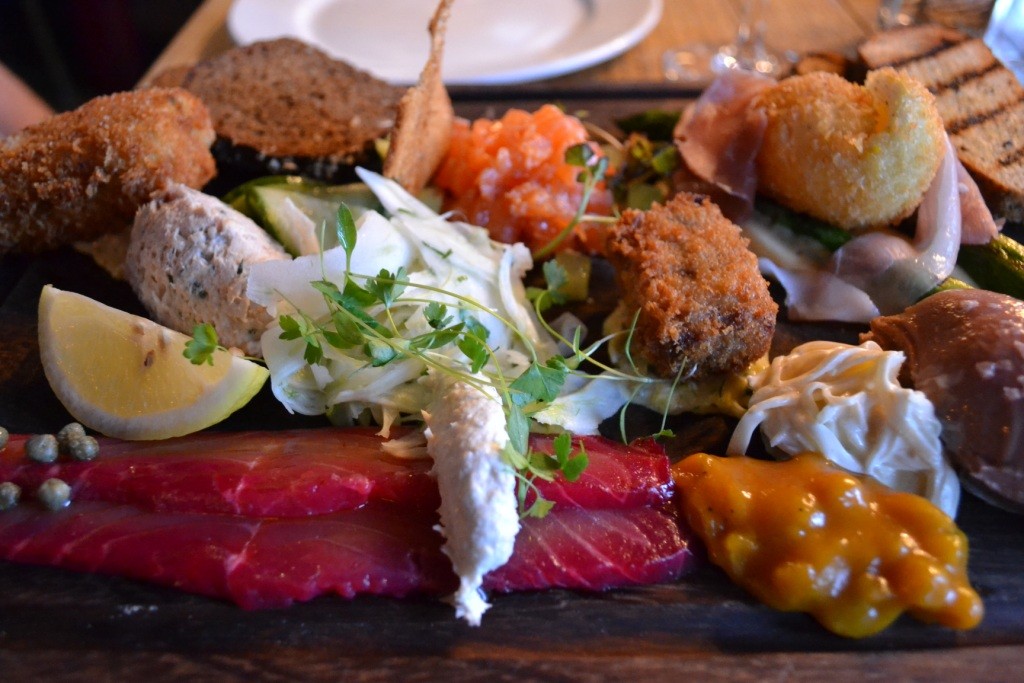 In the wake of other openings, Kentish Town’s most acclaimed gastropub had been sidelined. So what’s it like now?

The truth is we were in danger of taking the Bull & Last – one of London’s finest gastropubs – for granted. Sure, we’ve been there many times since its award-winning relaunch half a decade back, but last year it was somehow overlooked. And you lot appeared to feel the same: a clear winner in our 2011 Best Evening Meal Reader Awards, by 2012 it had slipped a couple of places due to the runaway success of Soho House openings Chicken Shop and Pizza East.

So a return snoop seemed overdue. Accepting their invite, it was a relief to see the simple interior, with its panelling and taxidermy, hadn’t changed. For a starter we were persuaded to try some of the more popular items from their summer picnic hamper, served colourfully on a wooden board (main pic above): house-cured beetroot gravalax, its earthiness made pungent with horseradish; asparagus with crispy hen’s egg and parmesan custard, a Bull classic, and rightly so. Then there was a nicely textural sea trout tartare and cured cucumber with avocado, croquettes filled with soft smoked haddock, a standout velvety chicken liver parfait…You simply won’t, we reckoned, eat more splendidly than this on the Heath.

This is not a surprise, of course. The place is internationally renowned, so we chose two less tempting mains in an attempt to be as objective as possible. Cornish cod – a corpulent fillet cooked perfectly opaque – arrived in a moreish broth with plump mussels and spaghettini, and deeply flavoursome “seashore” vegetables: beets, kale and samphire. But star of the show was the middle-eastern blend of lamb with smoked aubergine: generally not my favourite combination, but here a triumph, served pink with wild garlic, artichoke, and a mince-like mush of toasted pine nuts and olives. Its richness was heightened by Vega Tinto from Portugal, a smoky wine from the port-making region packed with notes of cherry and plum.

To finish? Salt caramel truffles and a decaf Mussetti coffee, as convincing as any I’ve tasted.

It appears effortless here: always a good sign, and proof that chef-proprietor Ollie Pudney and co-owner Joe Swiers are rightly focused on just the one gaff (they got rid of their other place in Putney). And they work carefully to get the balance right, very much in evidence on our visit: rowdy ale drinkers at the bar, couples cooing over Scotch eggs, and groups of diners feasting on some of the finest food in north London, as the heat emanated from the kitchen on a warm summer night.