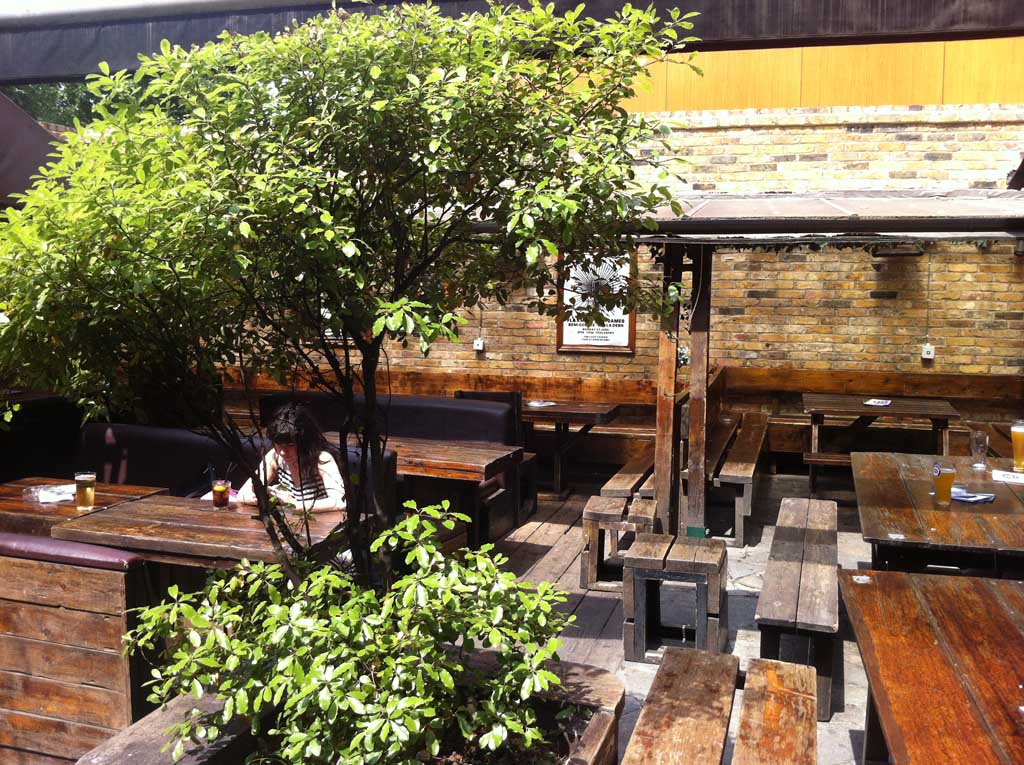 Chalk Farm Road’s Lock Tavern is the pub that, perhaps above all the rest that followed, skilfully sustained the move from forgotten, tumbledown boozer into iconic drinking and dancing destination.

This place pretty much pioneered the repositioning of pubs as post-rave era party joints, foodie hangouts and hipster community hubs. And it remains at the top of the pile today. No mean feat after more than a decade.

Its ‘always free’ entry policy and penchant for putting on big stars in the diminutive upstairs room (say, a Fatboy Slim DJ set or a Libertines acoustic show) has turned it into an iconic music venue. And the Lock was also years ahead of the pack with one of the very first branded ‘street food’ pub residencies, from the Square Pie company.

So we were excited to try out the new menu, even if the now ubiquitous clutch of burgers and pulled pork couldn’t exactly be called innovative in the current foodie climate.

We sat in the lovely back garden, now transformed by the hulking faux wood panels of the truly shite student accommodation block that’s just been completed next door. As we supped a devilishly refreshing pint of Camden Town Brewery’s roast lemon and bergamot infused Gentlemen’s Wit, we briefly pondered how permission was ever granted to throw up a tower of prefab shipping containers in the Harmood Street conservation area.

The thread of conversation was broken by the arrival of the now standard 1940s enamelled metal bowls and branded wax paper, featuring food that made a sadly uninspiring first impression.

The kitchen at the Lock is now provided by Patty Smith’s Burgers, a street food brand with no apparent slow burning back story of vans at markets or owners having quit city jobs to fulfil their passion. In fact the operation appears to be an in-house thing.

Nothing wrong with that if the burgers are great, but our cheese and bacon dirty burger (now where have we heard that phrase before?) at £7.25 was really no better than a decent BBQ effort. The accompanying chips were lacklustre with little flavour while the watery, fridge-cold coleslaw was uncomfortably spiked with too much English mustard.

Calamari tacos (£6.45) weren’t particularly tender either and proved little more than a bar snack after considerable bulking out with iceberg lettuce. For a pub that blazed a trail in so many areas, the Lock’s Patty Smith menu felt like the original is now playing catch-up.

The successful drink/eat/dance formula laid out here has been replicated to breathe new life into faded pubs all over the country. And as provincial pub grub, the new menu we ate here would be more than fine. But this is a stone’s throw from Lucky Chip at the Grafton, and a short hop to Dirty Burger’s famed car park shack. Honest Burgers opens a couple of minutes away on Camden Lock very soon too.

It feels a shame that their formula is now being so slavishly followed at the Lock. It’s difficult to imagine the current fixation with all things uber-burger lasting much longer, so we’d prefer to have seen something with more of that old trailblazing attitude on offer.

A range of travelling street food faves are popping up in the garden here over the summer, of course. So there will be a variety of visiting alternatives on offer, plus the Sunday roasts have always been a mainstay of a lost afternoon on the roof terrace.

Meanwhile directly over the road, Stables Market is home of the unreconstructed street food vendors serving up horrific doorstop pizza slices and florescent sweet and sour gloop to unsuspecting tourists. Which begs the question: why are Camden’s original formulas being done so much better elsewhere?