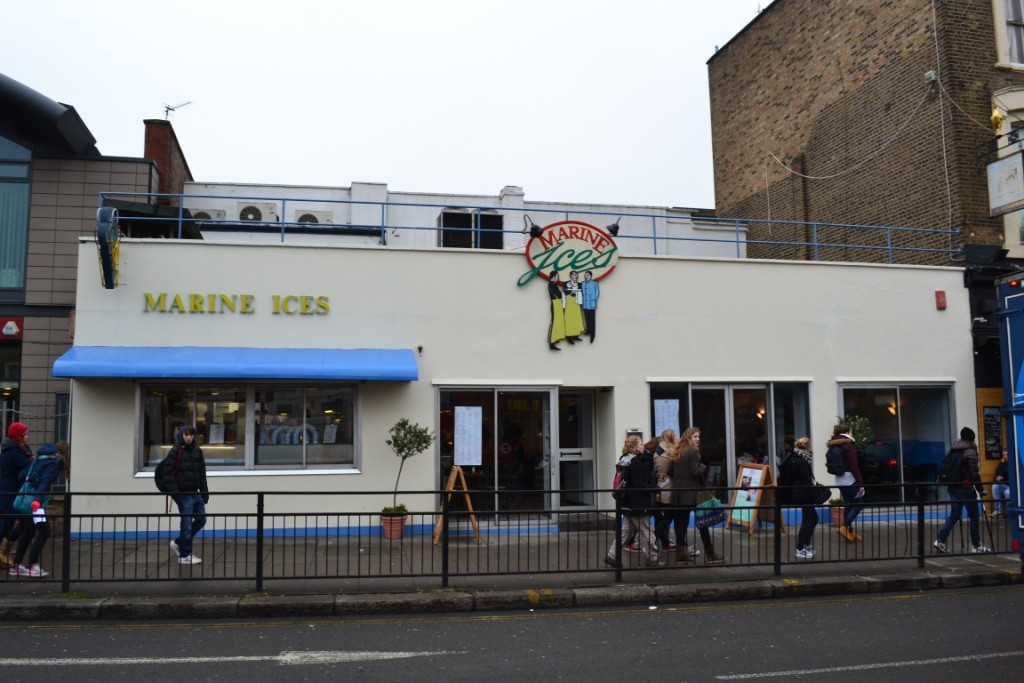 The hysterical coverage and dismayed tweets to "save" it smack of people shouting not listening. Here's what really happened when a local institution was sold

We’ve watched the news of Marine Ices’ sale with interest. It’s a rare iconic NW institution, for sure, and yet the hysterical coverage and dismayed tweets to “save” it smack of people shouting not listening. “Tweeters of Camden, is it true that Marine Ices in Chalk Farm has closed down?” said one today. “Ice cream lovers all over London will be sobbing into their cones,” reported Time Out. Even MP Diane Abbott waded in, quick to lend vocal support without, perhaps, paying full attention: “Oh no! Marine Ices in Chalk Farm has closed. How could purveyors of best ice cream in North London go out of business?”

Firstly, no, it hasn’t closed down. But it has been sold to Ponti’s, another long-established Italian family-run business, who we track down later in this article for their version of events. And yes, it’s now open. So we popped by for some lunch yesterday – and to have a snoop around.

What has changed? Co-editor Tom has been coming here since he was a kid and is the perfect judge of this new incarnation. “The framed celebrity signatures are gone,” was his first observation. “And they’ve closed off half the restaurant so not so good for our kids to roam around.” The kitchen is, in fact, a lot bigger: presumably this is where the money lies as Marine supply ice cream to chains across London. Perhaps Ponti’s are running a central kitchen here now too? There’s no Ponti’s branding anywhere though; a tactical move, perhaps.

To business. The ice cream is of course the same, untouched, so for that everyone can rest easy. But the remainder of the food menu feels significantly smaller, with a handful of pastas, seven pizzas around the tenner mark, plus the new, rather pointless addition of burgers (and loss of things like spaghetti vongole). We opted for classics: the lasagne (£9.20), which had a touch of the ready meal about it – stringy cheese, piping hot, less meat than you might expect; and a marguerita (£7.90), OK, but quite mean on topping and improved only when we asked for the quite delicious olive oil from Firenze. We’re not fans of Tripadvisor, but already it’s predictably packed with customers venting their disappointment.

But let’s rewind for a moment. Why do we hold Marine Ices so dear? Well, its story is utterly charming for a start. Founder Gaetano Mansi was sent to England by his father back in 1898. A hard worker, he opened a grocer’s in Drummond Street, Euston, in 1928, soon followed by another on Euston Road. But he never liked to throw away fruit that was spoiling so turned it into sorbet, practically unheard of back then, with demand outstripping supply. In 1931, he opened Mansi’s Cafe at Number 8, Haverstock Hill.

After the war in 1947, Mansi’s Cafe was rebuilt by Gaetano’s eldest son, Aldo. It was renamed Marine Ices as the building resembled the bridge of a ship (an original ‘porthole’ can still be seen today). Aldo’s younger brother, Anacleto became the driving force behind the ice cream side of the business. Gaetano retired and returned to his native Ravello, dying in 1959.

They began supplying other restaurants in 1963 when the first Pizza Express opened in Wardour Street, and now service chains like Strada, Cafe Rouge, Chez Gerard, Spaghetti House and Ponti’s, who of course has now snapped them up.

So why on earth did they sell? We spoke to Ponti’s CEO Stefano Ispani. “We were delighted and honoured when the Mansi Family contacted us with a view to taking over their restaurant,” he says. “The Ispani and Mansi families have been friends for many years. I grew up locally to Marine Ices and have very fond memories of visiting the restaurant with my father as a boy. On retiring from the business, the Mansi family wanted to ensure that Marine Ices remained in safe hands so both families sat down to see what could be done to ensure this happened.”

So this is hardly Starbucks pouncing on a flailing business, is it? “Ponti’s has a rich heritage spanning 50 years. There is a natural synergy between the two businesses,” says Ispani. “We both have long legacies with generations of families passionate and committed to serving great Italian food to our respective local communities. We are delighted that the restaurant is an institution in Chalk Farm and it is our intention to ensure the menu and offering stay true to the Mansi family legacy.”

And what of the fairly evident changes to menu and interior? “We have recently updated it in keeping with today’s tastes,” is all Ispani will say. “The interior will largely remain as it is – just a ‘sparkle’ and freshen up with a touch of paint.”

And that is, it seems, that. Over to you. But first, reader Gerry Slater, who wrote last year’s very popular Kentish Town Pubs I Knew And Loved feature, on his lifelong association with the restaurant.

View From a Reader: Gerry Slater

I have wonderful memories of Marine Ices. My Dad used to be a black cab driver, and he told all his punters that Marine Ices sold the best ice cream in London. As a child he used to take me up there in the cab. My only experience of ice cream was a “ToniBell” or “De Marco’s” whipped cornet. They were great but this was a whole new ball game. The colours, textures and smells blew my mind. It was heaven for a kid. After a while I seemed to graduate from a take-away from the hole-in-the-wall to a full sit down meal. It was the height of cool. Although I tried various dinners, I almost always had the Spaghetti Bolognese followed by mint-choc-chip (in a glass, with a wafer, no less). Never had better before or since.

On top of the great food was the friendly service that you only only seem to get from a family business. Sadly my dad has now passed away but I wondered if my daughter would have the same feelings for the old place that I did? She did! Yes, still has great food with friendly service. And time for a chat. I would say that it is her favourite place to go to eat and she asks me all the time, “Can we go to Marine Ices?” We usually do. I suppose some of it is about being with your dad, a connection from then till now. It’s a shame that it has been sold/changed. I hope they can stay true to the old principles that made them so popular in the first place. I’ll certainly try the “new place” and if my daughter likes it, that’s good enough for me. And lastly, I hope it still brings back the old memories.

What do you think of the sale? A disaster? Or did the restaurant need a refresh? And in today’s far more foodie climate, are the updates good enough?