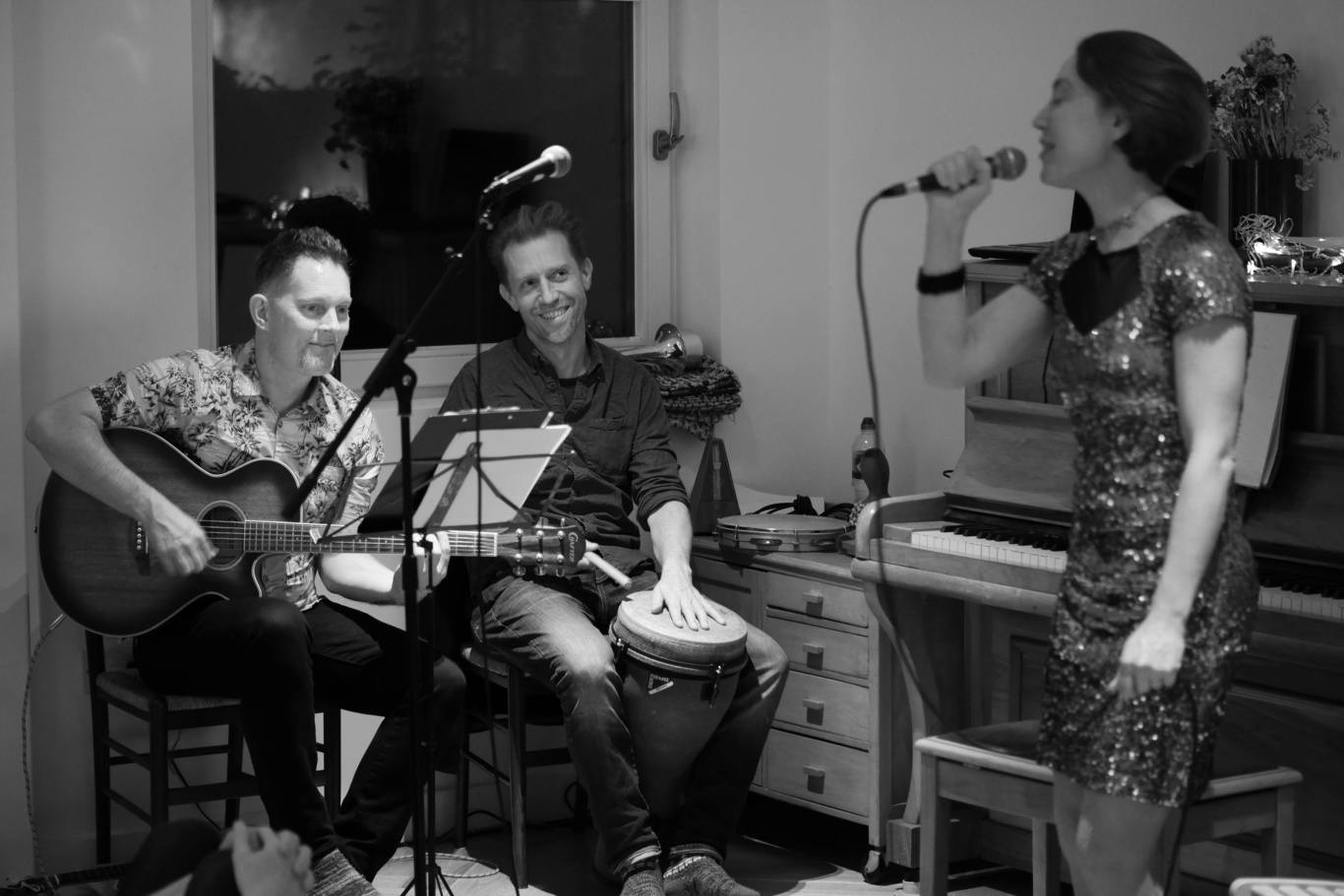 The Sandersons: Live gigs in an NW5 living room

Throwing gigs for 50 people in your own living room might not be everyone’s cup of tea, but it’s proved a hit for one local

n Kentish Town, you’re never more than six feet away from a musician. Fact. And nowhere is this adage truer told than by Jo Taylor’s neighbours, who have witnessed her hosting an increasingly popular series of live shows in her actual front room over the last two years.

“We’ve never had a complaint,” she says, proudly. “In fact, it’s a real community effort. One of the neighbours designs our flyers and we borrow the sound kit from another. We always put on a simple meal where people can contribute a dish, and there’s a charity collection at the end, too.”

Being inclusive has enabled this unlikely backstreet pop-up venue to become the ideal springboard for Jo’s band, The Sandersons. They’ve used it to test out their material, forge musical alliances and ultimately it’s led to the release of their first EP, Photograph of Time (listen in full, download or gift here).

“It all began as a simple idea for a low risk way of sharing some of the songs I’d been writing with friends,” says Jo, a charity development specialist by day, who soon realised her organisational skills were also well-suited to managing an open mic shindig in her own home.

“We got great feedback after doing the first one, as a lot of our musical friends said how much they appreciated having a supportive space where they could step up and try out stuff they hadn’t played in public before, to see how people responded.”

It became apparent that London lacks informal venues where bands can test material without investing often non-existent ‘earnings’ into securing the booking, and having to take a punt to see if they can sell a certain number of tickets. Bringing the whole thing into a private home softens these edges, and also takes music back to its roots.

“Traditionally the only way you could hear music was to gather at somebody’s house,” notes Jo.

“Today’s experience is often more bland, played in tiny headphones while walking down the street. It’s terrifying how intimate it is playing live when the audience is quite literally sitting at your feet, but we’ve had a few pros play at the sessions, and they always say they really enjoy amazing sense of connection you also get in such a small space.”

The Sandersons’ project was born in 2017 after Jo travelled with another group to sing in the refugee camps at Calais and Dunkirk. She found hearing people’s stories there a profound experience, and processed it all upon her return by starting to write her own songs. “That trip was the spark,” she says.

She knew another local musical mum, Sarah Rimmer, also wrote songs that had never been heard outside her own bedroom, and slowly convinced her and a handful of others to join forces to play a gig in the safe space of the living room. Having said that, they did have a slightly bigger audience than the select few squeezed onto the sofa.

“From the outset we streamed the sessions online,” says Jo, “mainly because we’re quite an international bunch. Our bass player is Argentinian, our guitarist is Australian, and their families and friends wanted to join in.”

Soon instilled with confidence as a five-piece, they moved out from behind the front door, taking their trademark mix of vocal harmonies and textured instrumental arrangements on the road to festivals and events, and recently playing on the roof of the floating bookshop, Word on the Water, in the heart of King’s Cross.

Meanwhile, back where it all began, Jo’s homespun sessions have now seen just shy of 60 different musicians step up to the mic and play, and they have brought 25 different instruments along with them.

“The most exciting thing has been the collaborations that have come out of evenings here,” she says. “A couple of bands that came together for a night have gone on into the studio to record material or played together at other events. I love that the sessions have become the impetus for people to take their creative explorations to the next stage. The living room vibe is very friendly, so there’s a lack of the usual barriers that can stop conversations, and good things tend to emerge as a result.”