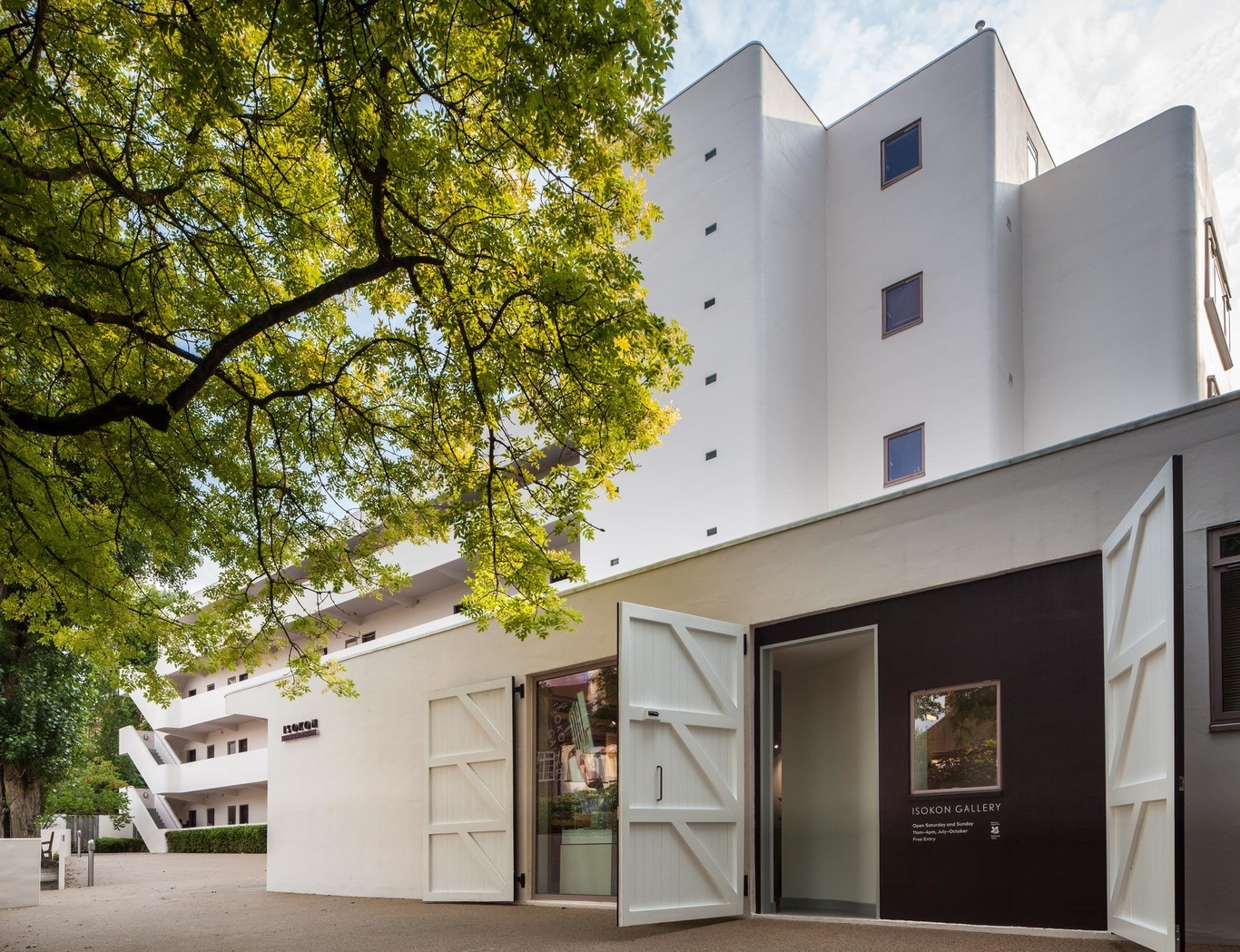 Isokon Gallery – and the story of the Isokon building

We’ve walked past Belsize Park‘s iconic block of 1930s flats dozens of times, always wondering what they might be like inside.

Odd then that we’ve somehow missed the fact that the tiny adjoining museum opened nearly five years ago now, and is free to visit every spring and summer weekend.

Housed in a former garage at the front of the forecourt, the Isokon Gallery contains a permanent exhibition telling the absorbing story of NW3’s stark white building.

A pioneering modern apartment block built in 1934 as “an experiment in new ways of urban living”, here you can ogle some enviable period furniture, directional lighting and a mock-up of a tiny Isokon kitchen (see below) to give a pretty clear picture of how perfectly pocket-size the flats are.

There are also seasonal displays to tempt back previous visitors: this spring the spotlight is on the life and work of Bauhaus-trained graphic designer and Belsize Park resident, George Teltscher-Adams (1904–83).

But what of the eye-catching pile itself? Containing 36 flats (originally 32), it was designed by architect Wells Coates for a couple, Molly and Jack Pritchard, who went on to occupy the rooftop penthouses. How divine.

Services when it launched included shoe cleaning, laundry, bed-making and meal deliveries from the staff kitchen, but in 1937 this was reconfigured as hip restaurant and watering hole, The Isobar – with a swanky decked outdoor area for sunny NW3 afternoons.

It soon became a martini-drenched haunt for brainy-cum-hedonistic folk in north London, with the likes of (Isokon resident) novelist Agatha Christie and seminal sculptors Henry Moore and Barbara Hepworth all undoubtedly braying regulars at the bar.

But then war broke out. Being made of reinforced concrete, the building unbelievably – despite bombs nearby – survived the Blitz (fact: it was repainted brown to hide its distinctive form from German bombers).

Fast forward to 1969 and Pritchard sold it to the New Statesman magazine, who in turn flogged it on to Camden Council three years later. Listed Grade II in 1974 and raised to Grade I just before the turn of the millennium, it was nonetheless poorly maintained, and went into gradual decline.

Cue the Notting Hill Housing Group coming on board with a major restoration project in 2004; and isn’t it good to discover that fifteen years later, most flats are owned on shared equity basis by key workers such as nurses and teachers?

But hang on, the best way to learn all this is simply to pop down to Lawn Road and pore over the story plaques, diagrams, photos and even 1930s menus (boiled cod! stewed rabbit!). I reckon you’ll leave with a real feel for this most enduring landmark.

Isokon Gallery, Lawn Road NW3, free entry, open 11am to 4pm each Saturday and Sunday from March to end of October. More here