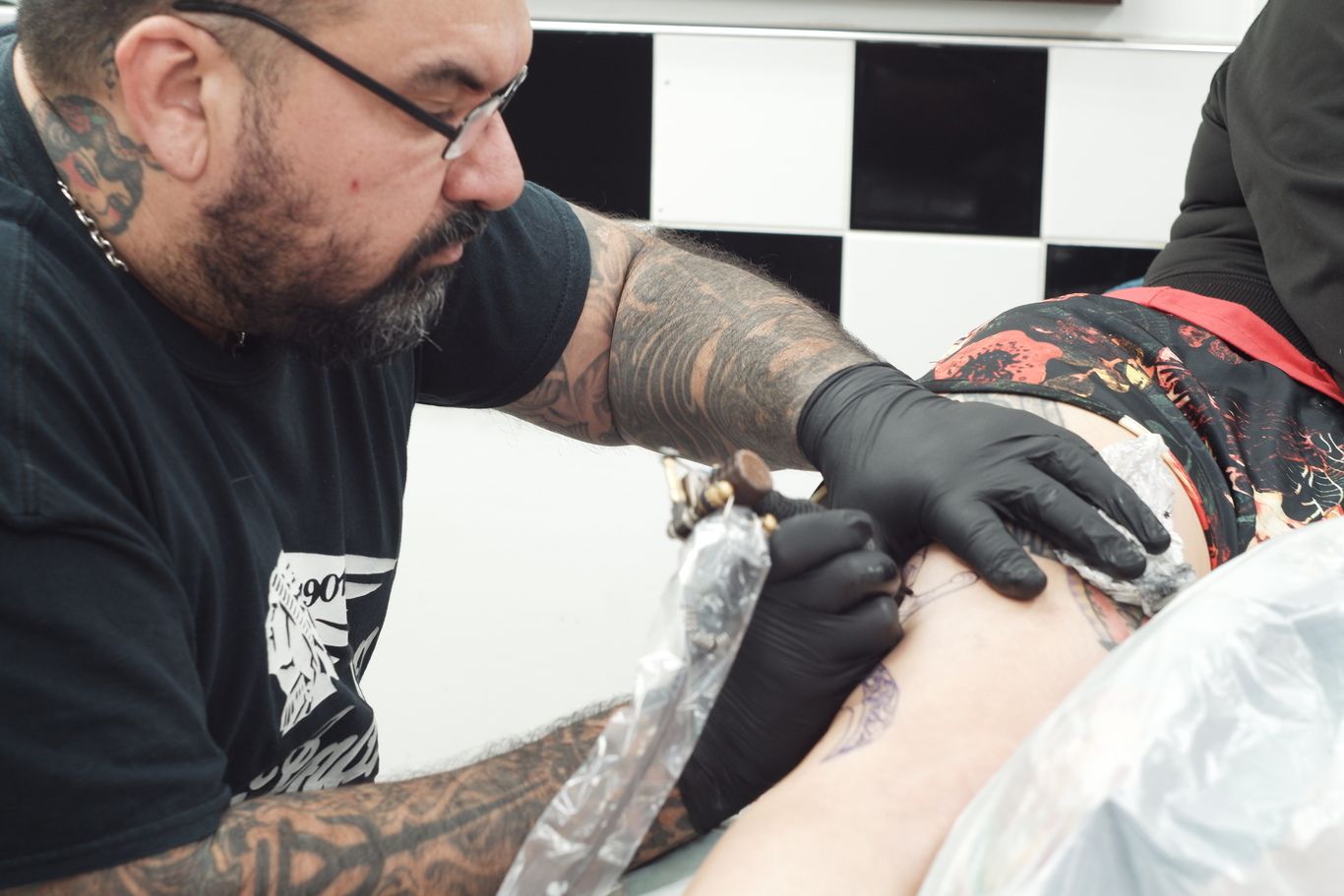 The buzz of needles fills the luminescent parlour in south Kentish Town. I observe with mesmerising interest as bespectacled owner Naresh Bhana works studiously on client Sacha’s sizeable thigh tattoo; we chat at the same time.

“I started on Blackstock Road,” says Naresh, “before getting my foot in the door of a shop in Tottenham called Original Skin. It was owned by a woman called Cilla; she gave me a chance. I was there for about five years before deciding it was time to open my own place.”

This was way back in 1998, and the first site was located on Holloway Road. “But when they started building the Emirates Stadium, the landlord saw dollar signs and muscled us out by raising our rent to an exorbitant amount,” says Naresh. And so the move over this way. “It seemed perfect,” he says. “Not too near to the craziness of Camden but close enough to the tube.”

The vibrant red exterior gives way to an interior with a retro feel, decked out with monochrome tiles and splashes of crimson. And the name? It sprung from an interest in counter culture, the hot rod scene and rock and roll. “It fitted with the vibe and our style,” says Naresh, who now commutes in every day from Enfield.

With twenty years in the bag, what’s their secret? “We have a high focus on customer service,” says Naresh, “we really try and look after people. We’ve managed to carve out a niche for ourselves. Hopefully it’s because we’re doing something right.”

Sacha nods her head enthusiastically. Her tat is Alice in Wonderland-themed, with its Cheshire cat, blonde hair with blue ribbon and Mad Hatter detail (see our front cover image). It’s big enough that she’s already had a previous session and will need another one to complete it. “It’s to commemorate my best friend who died,” says Sacha. “She used to say I looked like a Cheshire cat because I’m always smiling. This is my fifth one; it’s the biggest and most colourful.”

Naresh and his team turn their hand to a variety styles. “I’ve not gone specifically to one thing or another,” he says. “I like to do larger, bolder pieces, traditional and Japanese ones too. Unless you’ve got that artistic element to your character there’s no way you can work in tattooing these days; there’s no room for someone who just wants to be a photocopier.”

The whole process is collaborative, the customer and tattooist on a journey together. “Someone may be absolutely rock solid in what they want, but we have to talk them round to what’s actually possible,” says Naresh. “Often they have low expectations of what is possible and don’t realise that we’re here to create the design for them. They’ll come in with something their mate’s drawn – not particularly well – and be insistent that they want it exactly like that. It’s our job to get to the route of what they’re looking for; we really get to know people.”

The studio has an admirably ethical policy. “On occasion we have to refuse work,” says Naresh. “We don’t do this lightly, but rather because we care for the welfare of our clients. For instance, hands and necks are a popular choice if you believe all you see on Instagram and Pinterest, but the repercussions to the wearer can be very real. We like to make sure the client truly understands what they are getting into for these highly visible areas, so you need to be at least 25 and have a good idea of where your life is headed – and of the potential prejudice you may encounter – be it in work or from other cultural conventions.”

It’s a subject Naresh feels strongly about. “We’re not here to rain on your parade but are professionals and feel a duty to steer our clients to the best choice for their circumstance. Unfortunately some people have a hard time hearing the word ‘no’ and, however diplomatically we deal with these clients, it has led to a few negative responses. But we feel it’s worth it to stand by our principles.”

Does Naresh lament any of his numerous tattoos? “Not really,” he says. “When I was younger it was a bit of an ‘FU’ to the world, a rebellious thing. I was fourteen and it was frowned upon; I wouldn’t recommend that to everyone. It’s become mainstream, which is good because we can make a living, but at the same time it’s taken a bit of the edge away. Maybe that’s not a terrible thing, but for some people it obscures the stigma and it can then come as a bit of a shock later on when they realise others are judging them and making assumptions.”

Throughout the two decades they’ve had all sorts of clientele. “It’s always been a real mixture,” says Naresh. “The only thing I’d say’s changed is it’s more like fifty-fifty men and women nowadays.”

They’ve had a few well-known faces, too. “The most famous recently was Rita Ora – she was Instagramming from outside before she even came in. Seasick Steve has been in before and we get approached quite often by production companies wanting to use the space. Ricky Gervais filmed a big scene for his movie Life On The Road, and the late Peter O’Toole shot a bit of Venus here.”

Impressive. As Naresh finishes up on Sacha for the day he douses the top of her leg with antiseptic wash. “It’s the best feeling,” she says, “they’re really addictive.”