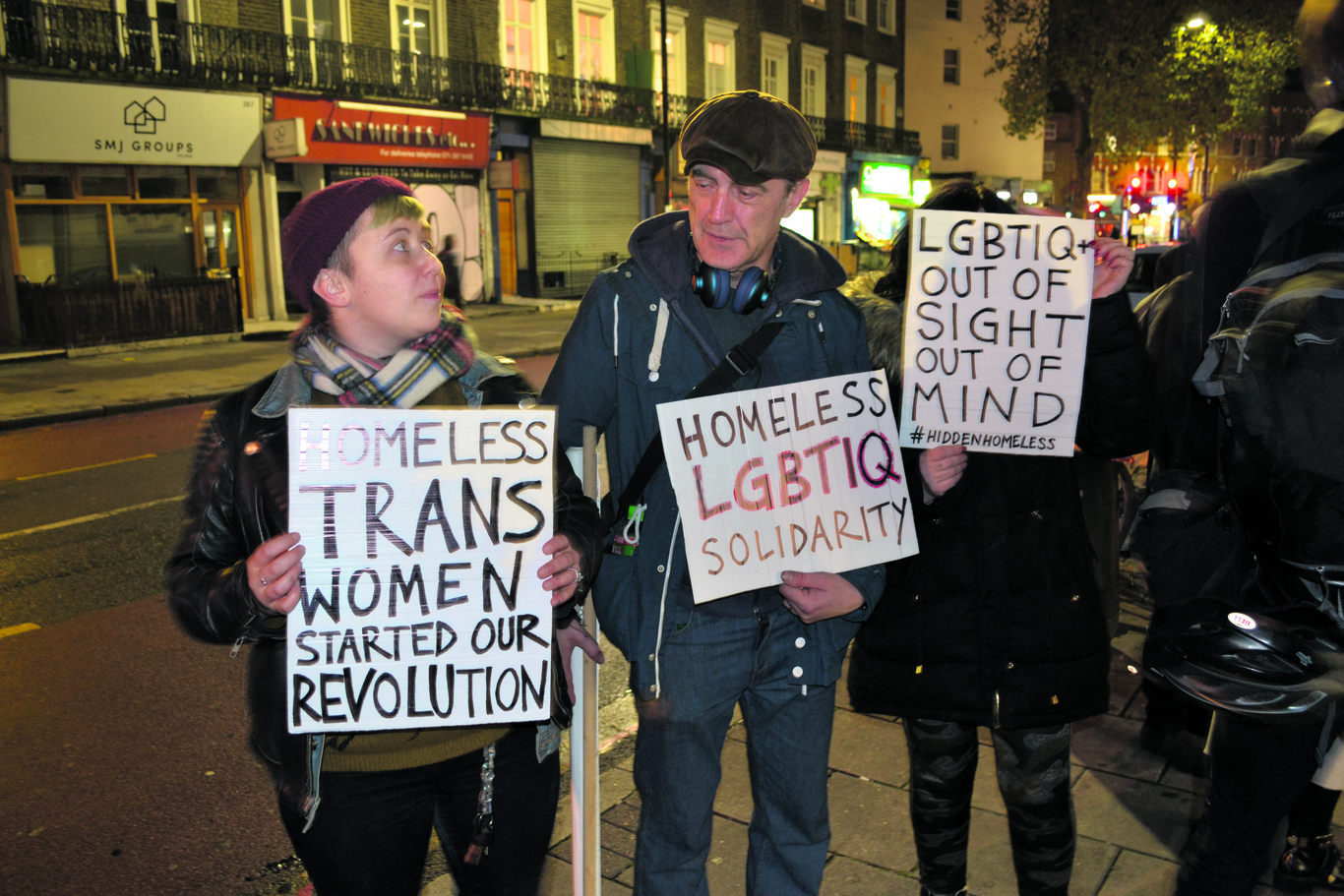 t’s half seven on a Monday night. It’s eleven degrees; warm enough for now, though there’s a nippy wind blowing a persistent reminder that it won’t be like this for long. The pavement is damp in patches, the remnants of an earlier shower. The forecast says it’ll be pouring again in a few hours.

I’m walking up Camden High Street, having just attended a demonstration outside Eversholt Street’s Camden Council Chamber. For a little over an hour I’d stood with about twenty others around a black sign, made from masking tape and white spray paint it said; ‘NO MORE DEATHS ON OUR STREETS.’ Littered around this were smaller signs stating that ‘Camden has 2 Empty Properties for Every 1 Rough Sleeper,’ and calling for ‘Homeless LGBTIQ Solidarity.’

Carla Ecola from The Outside Project (an LGBTQ+ homelessness shelter and community centre) was there, Janie Mac from Refugee Community Kitchen (who feed hungry people without judgement across the country and continent) stood alongside her, while next to her was Jon Glackin from Streets Kitchen (who offer food and clothes to the homeless but aim to show solidarity by providing shelter, advice and a sense of community). They are three of the capital’s most formidable grassroots activists. They spend their days, nights and weekends working tirelessly to support those living on the streets.

Coincidentally standing a couple of metres away from us, in what looked like – but definitely wasn’t – a counter protest, a group of Lib Dem endorsed People’s Voters shouted into megaphones, danced along to a boombox and enthusiastically waved EU flags. There were more of them than us, they were louder – and we all secretly wished we’d brought our own megaphone and a few more flags.

Inside the Chambers, the Council were having a debate on rough sleeping (webcast it here), which they defined as the “most extreme and visible form of homelessness. The people who experience it are among the most vulnerable in our communities. Life on the streets can be dangerous, exposing individuals to risk and harm, but we also know that it is seriously detrimental to a person’s physical and mental health.”

Councillor Georgia Gould, leading the debate, started by thanking the speakers (from vital local organisations like New Horizon Youth Centre, homelessness empowerment charity Groundswell and Camden Housing First). She also thanked “those outside for making their voices heard” – presumably aimed at us, and our megaphone-less heckles.

“We decided to have this debate before the tragic news of the death of someone sleeping on Chalk Farm Road two weeks ago,” continued Gould, “but what’s happened, makes the discussion that we have here today even more important.”

She then went on to confirm that the average life expectancy for someone living on the streets is 47 for men, 43 for women. Between 2000 and 2010, our borough saw a significant reduction in the number of rough sleepers. However numbers have skyrocketed in our recent and on-going ‘context of austerity, rising housing costs and cuts to government services,’ the meeting’s report stated. Later, Councillor Luisa Porritt spoke of the record number of people sleeping on the streets in London. “In the year to autumn 2017, the number of people rough sleeping in Camden rose by 647%. This shouldn’t be happening in modern society in a rich country,”” she said.

“I know all who live in Camden care deeply about this issue,” said Gould, “we don’t need the statistics to tell us about the sharp increase, we can see it and experience. It is coming up time and time again with our residents asking what they can do to help.”

In the debate, speakers urged that locals can report rough sleeping through the Camden Streets Safe app. They spoke of the borough’s various initiatives and partnerships: Public Transport Outreach Team, a specialist service for “hidden” rough sleepers using night buses and tubes for overnight sleeping, and Routes Home, a service for non-UK nationals to reconnect with services and housing in their country of origin. There’s also the Camden Routes Off the Street Strategy, which aims to connect people with services they can access that will ‘give them the best chance of gaining long-term stable accommodation and breaking the cycle of vulnerability to rough sleeping,’ the meeting’s report stated.

Outside, as we rolled up our posters, having out-lasted the People’s Voters, we discussed how the council’s support depends on referrals, how British citizenship is often a prerequisite for accessing services, and how accessibility is often an impossibility for those who use substances.

As the debate continued inside, speaker after speaker stated the tragedy of someone dying a 15-minute walk down the road. Outside, we discussed how we still don’t know the man’s name. “He’s sitting in a morgue, we have to identify him by his teeth, his hair,” said Jon from Streets Kitchen. The council’s meeting continued as we disbanded.

I decided to walk to the Roundhouse, to the spot where the man was found. Just next to Koko sat a cross-legged man wrapped in blankets. His hood was up, his head slumped, he could have been asleep, could have been unconscious. Outside Lidl sat another in a brown woolly hat, huddled into a cardboard box, a constructed home. I took my phone out and started to note down the people I saw on the mile-long walk.

Across the road stood a green tent with a person sleeping inside. Three guys sat near NatWest drinking beer, chatting, surrounded by plastic bags. A man in high-vis sat on a cardboard box, red umbrella in hand. Someone in a duvet sat outside the station eating a kebab. A bloke in military garms with a long grey beard, stood close-by, singing, quietly for change. A woman with luggage and plastic bags charged her phone on a BT street charger. A twentysomething sat near the lock with a dog on his lap, telling people to have a good night. A guy with a guitar asked smokers outside Camden Assembly for money.

Then the twelfth person: a woman in a purple hat, wide-eyed, begged people for change outside the Roundhouse, a metre away from the doorway that now contains an impromptu shrine; a few bunches of withered flowers, a few upturned candles and a hand-written tribute on A4 paper:

‘In remembrance to the homeless-gentle soul who passed away at this very spot this morning (Sunday 28/10/2018). The world may have forgotten but we acknowledge and recognize your existence. Safe passage. Rest in Peace.’

“What would help us,” Jon continued, “is an empty commercial building. We need access to a space in the borough – even if it is just temporary – so that we can offer people shelter and store supplies over the coming months.”

“And volunteers, supplies?” I said, aware that they serve food, offer bedding, clothing and other essentials outside Camden Station three nights a week, in Finsbury Park, Clapham, and Hackney too.

“Yes, we need volunteers, but people can set things up themselves. It is funny, I’ve got people ringing me asking if they can set up a Streets Kitchen in their local area. Asking permission from me,” he said with incredulity. “You don’t need permission from me. You just do it.”

Regardless of whether grassroots solidarity organisations or registered charities resonates more with you, there are plenty of places to offer your time, money and attention this winter.

Let’s make sure no more ‘homeless-gentle souls’ leave this earth before their time, because we let them feel like the streets were the only place they could call home.