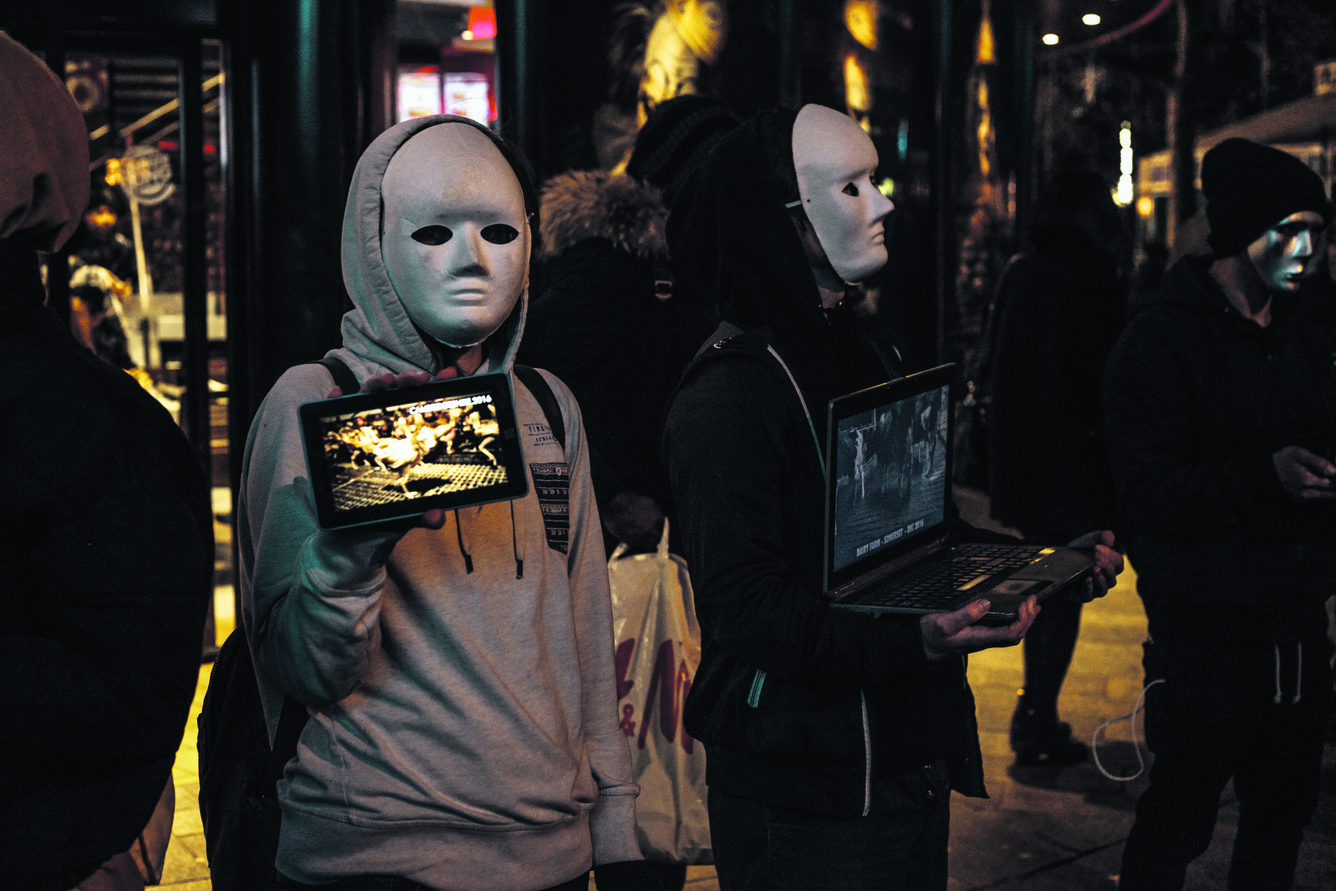 or the last few Mondays, the triangular slab of pavement outside Camden Town tube has hosted a notably eclectic bunch of people. Sometimes there are five of them, sometimes ten or twenty. When the clock strikes six, they get in formation, hide their faces behind white masks and press play on their laptops.

Amongst their ranks, when we popped down last week, stood Boris, a septuagenarian who’s been vegan for 26 years and is “completely invigorated” by the current cultural shift. To his right was Mira, a year 10 pupil at Lubavitch Senior Girls’ School, who’s converted her whole family to a dairy-meat free diet and comes down every week after school.

The motley crew are all vegans, they’re all activists and they’re all taking part in the Earthlings Experience. On a Saturday evening they can be found in Leicester Square and now, every Monday night, right here in Camden Town.

“It is just a really simple way of doing activism,” says co-founder Jane Frampton, who conceived the idea with her sister Phoebe four years ago. “It was Valentine’s Day and we wanted to show people what real love is, real love for all beings. So we got on the tube that night with a laptop and played the film Earthlings.”

This is the infamous 2005 documentary that depicts cows dangling from hooks in abattoirs, elephants being beaten in circuses and whales having their fins hacked off. It is a film that many plant-powered folk regard as one of the most pivotal moments in their transition to veganism.

“In the early days it was a shame because everyone was just talking to us and not actually watching the film. So we decided to put masks on and the second we did, everyone started watching. We realised that it is a really effective, really safe style of activism. It is non-confrontational, you don’t have to show your face and you’re literally just passing on information.”

fter their first successful mask-session they loaded up Facebook, telling as many animal rights activists as they could, spreading the word that showing a film – a horror film to be frank – was a much more effective way of engaging people than say, giving them a leaflet, or trying to talk to them on the street.

Before long, the Earthlings Experience had become a worldwide movement. There are now groups in cities like Macau, Medellin and Thessaloniki, all utilising the same simple formula: put on a mask, press play on a laptop and stand still in a public space. “It just goes to show, you don’t create something big by saying let’s come up with the biggest and best idea: activism can simply be about doing small activities that you know work,” says Jane.

“I’m still surprised that people can just sit there and watch this documentary, but they do, people used to ride the tube and view it in its entirety. It’s such an intense watch,” says Jane, who’s been running the project for four years, seen Earthlings and Hope & Glory (the updated version that they show now) umpteen number of times and yet she’s still visibly disturbed by the footage.

While we stood with the Earthlings, one woman stared transfixed on the screen, hand clasped over mouth on the verge of tears; another guy talked about why he’s toyed with the idea of veganism but likes halloumi too much, while another still affirmed that he only eats cows who’ve “lived a nice life” with “daily massages and open pastures.”

“The responses are always so varied, you never know how people are going to react: we get told to fuck off, that we shouldn’t be showing this. Some people start laughing, others ball their eyes out,” says Jane.

At the end of each shift, Jane and her wife Phoenix hold a debrief with their volunteers, who have either spent the evening holding laptops, posters or strolling around chatting with people about how the footage makes them feel. Conversations have certainly changed since they first started out. “We no longer have to explain to people what veganism is,” says Jane, “nowadays people know what it is and they know what happens so we are just talking to people, listening to their reasons for why they can’t do it.” This is normally attributed to convenience, or the “misguided belief that veganism is expensive or bad for your health.”

When they leave, the activists give people a little leaflet with useful vegan resources on it. “All we are trying to do is make a connection between us and them, them and the animals, their planet and their health – whichever they care most about really.”

Jane insists that they aren’t here to judge people or hassle. “We all ate meat and dairy at one stage, we just want to get people thinking,” she says. Which sounds about right considering the fact that we were with them for well over an hour, and at no point did anyone enquire as to whether or not we were vegan. Nothing about our conversations seemed intrusive: it was a calm, facilitating space where there seemed to be lots of amicable conversations going on.

Later, during the night’s debrief, the group discussed a range of both positive and negative experiences of their interactions with the public. One activist spoke of having to sit and nod as the cow massager grew aggressive, veins popping from his forehead as he provoked himself into a complete tizzy. Another reported that a plucky weed dealer made a deal about a foot from her laptop. “Only in Camden,” said Phoenix, as the cow massager charged past the group into the station, seething. “We send him love,” she said.

This is box title
Experience the Earthlings on Camden High Street, near the station from 6pm-8pm every Monday, or in Leicester Square on a Saturday. For more, head here.