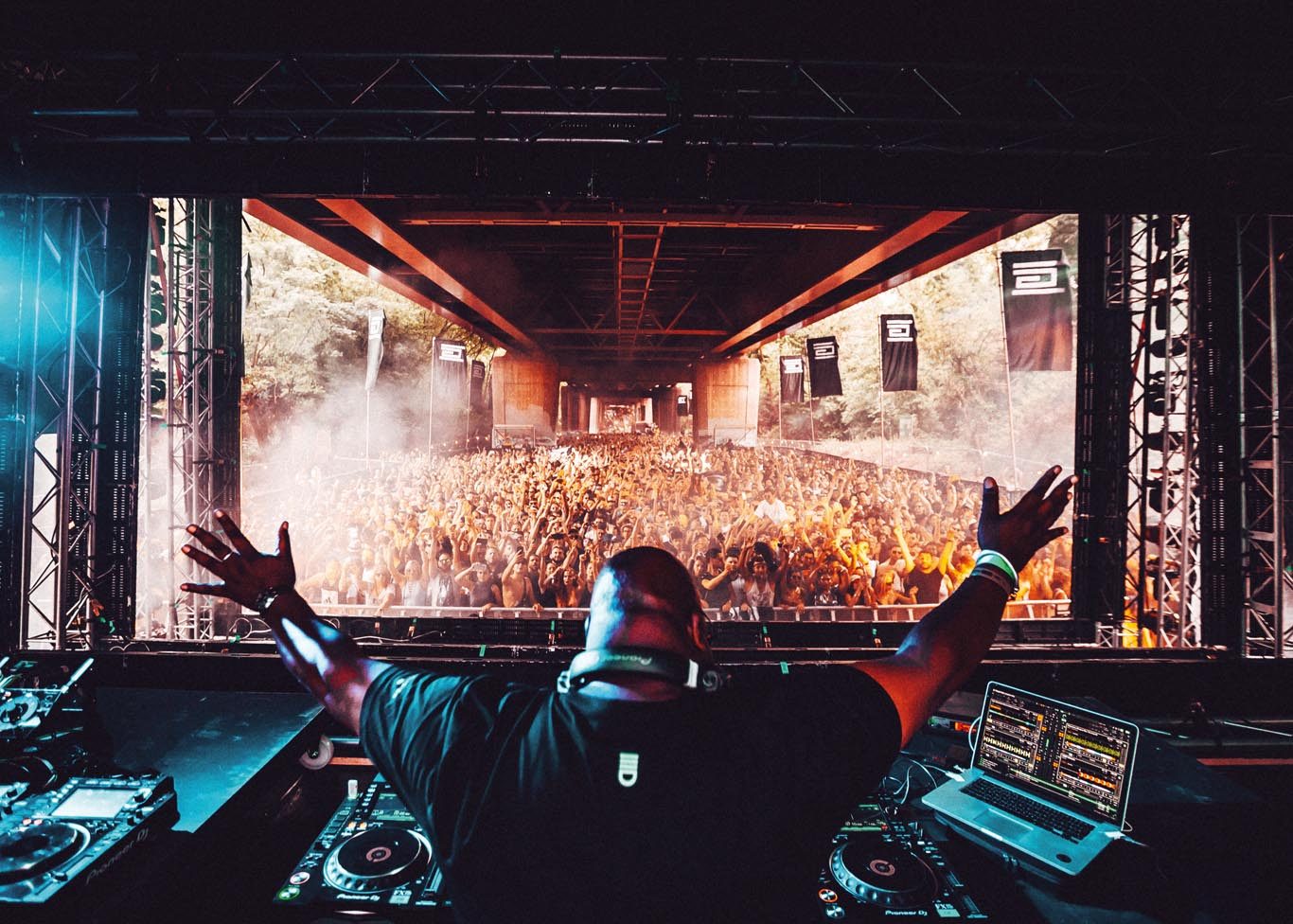 Night time in the day time

No longer confined to festival fields in the summer months, raving in the afternoon has become an urban phenomenon

round 3pm on a hot summer Saturday earlier this year we were underneath the duel carriageway of the M4, enjoying blistering techno alongside a few thousand other excitable types. (See main photo)

The aptly named Junction 2 festival is one of the many jewels in the crown of London Warehouse Events (LWE), the city’s leading proponents of big, experiential parties in stunning locations, many of which take place before traditional club events open their doors.

The sun-dappled rave is phenomenal sight, ideal for live social media bragging, of course, and pulling in the biggest of big name DJs including Carl Cox (above) and Adam Bayer. As late licences continue to be painful to secure, venues are hard to come by and noise restrictions scupper using such adventurous spaces at night, the obvious solution is to shift the whole bash to daylight hours.

But there’s more to the success of these events than that. Jeff Gray, LWE’s head of promotions, thinks it’s also generational. “Young adults today are very conscious that they can’t turn up for work or Uni on a Monday morning without being anything other than completely on the ball,” he tells us.

“Previously, clubbers would go out on Saturday night, then onto a whole myriad of Sunday after-parties and would not come down to planet earth until Tuesday earliest. The growth of inner city daytime festivals and Saturday daytime clubbing that LWE has spearheaded allows the whole of Sunday to recover. What has changed massively is how people perceive their health and the importance of looking after themselves. They’re not prepared to put their bodies through a weekly all-night marathon, which takes its toll both mentally and physically.”

With exciting daytime venues such as Tobacco Dock and Printworks nudging London closer to the Amsterdam model of multi-purpose performance spaces, the day is, in an odd way, at the cutting edge of nightlife in 2018.

It’s also where the scene is breaking free from the tired sleezy associations and finally being viewed as having artistic merit beyond just DJs playing some tunes. LWE bringing the Arcadia spider of Glastonbury fame to London back in May, and showcasing the Innervisions label at the Royal Albert Hall last month showed how far the envelope is now being pushed.

“Regular events now taking place at The Barbican and Royal Albert Hall and festivals like Boomtown, Arcadia and Wilderness are breaking down the barriers between theatre and electronic music,” says Jeff. “These advances have helped progress club culture in the UK massively over the past ten years, but there is without doubt still a long way to go.”

With nightlife still very much under siege from cash-strapped local authorities and police, the daytime is experiencing ongoing growth.

Popular parties, such as the Drumcode record label’s annual Halloween bash later this month, have moved from late all-nighters to Saturday lunchtimes, packing in thousands in the process(there is still, thankfully a more traditionally timed afters though, for those that feel a 10.30pm curfew just isn’t scary enough for Halloween).

Ultimately, London’s unique mix of licencing issues can’t contain the creativity at work in the city, and if that means we swap grueling late nights for healthier afternoons and plush concert venues in order to get our dose of throbbing techno, onward we go into this bold new raving era.