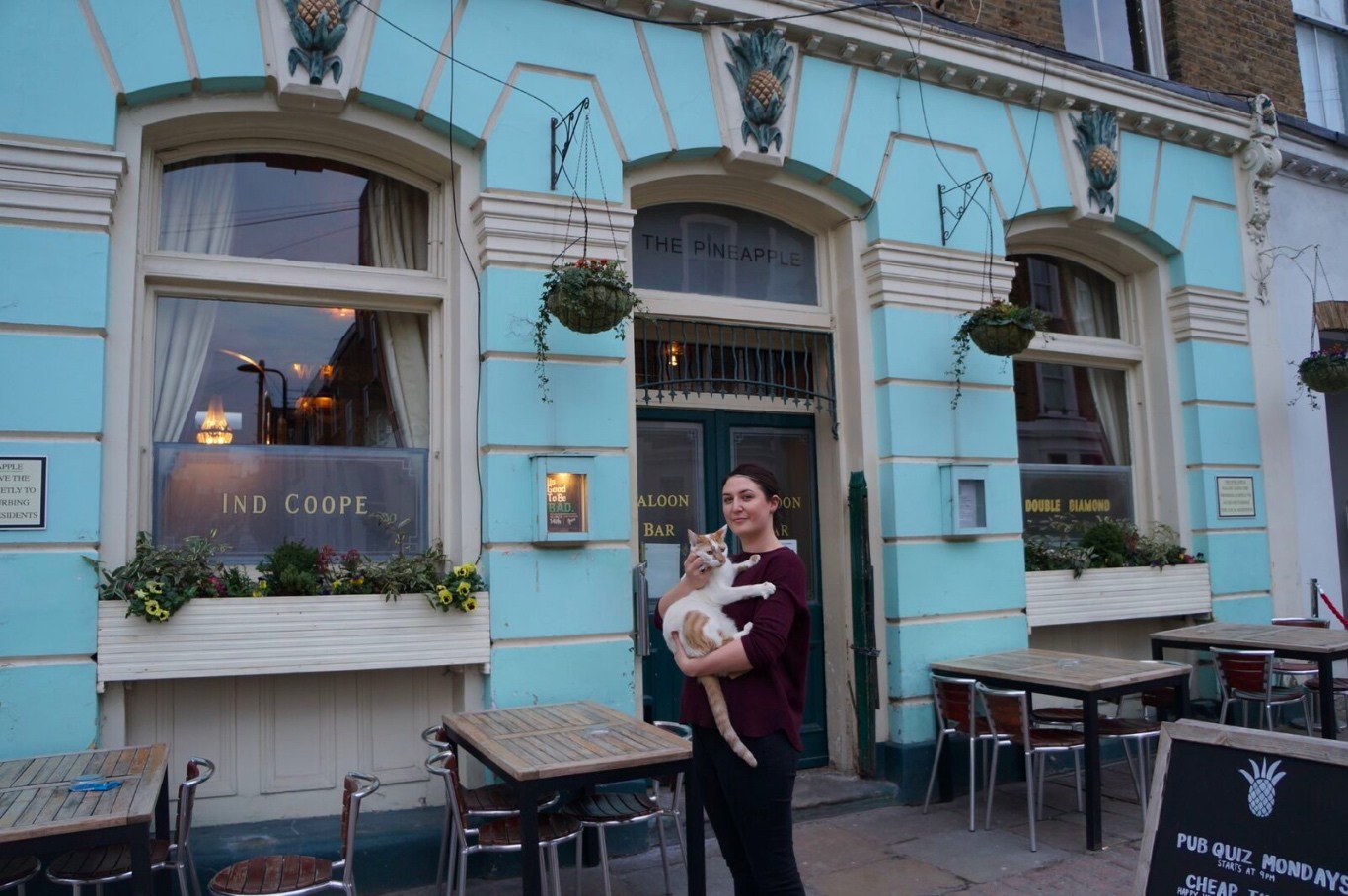 Why we should celebrate The Pineapple pub turning 150

Prising open the wooden doors of the Pineapple pub – built in 1868 – is a sensation far too familiar to many of us. Almost immediately met with a surge of cockle-warming conversation and good cheer, the air tinged with mahogany and ale, this is the timeless, irreplicable ambience of a centuries-old public house.

Once inside, red velvet curtains frame the immortal words ‘Whiskies Brandies Wines’, archaic lettering etched into the back bar 150 years ago. A Victorian advertisement, as well as recommendation for thirsty punters, it’s difficult to comprehend how many people have stepped through these doors, seeking solace, refuge or pleasure as they glaze over these options – before pulling up a stool at the beckoning bar.

“I love seeing people’s faces when they come through the curtains for the first time; they just stand there in awe,” says landlady Poppy Wheldon, who took the helm three years ago.

Despite its mentions in almost every guide to the best boozers in London, the pub, which turns a century-and-a-half old this Easter, has retained the sense that it is a stalwart hub for the local community.

Manoeuvring past the main bar, en route to the crisp-aired, wicker-chaired conservatory, a glimpse at the notice board in the corridor says it all. A couple of posters for missing cats, handwritten house-hunting notes from a “friendly couple looking to rent within walking distance of this pub,” and a song-sheet created by a local kid as an ode to SpongeBob the resident cat, are all interspersed with fundraising notices from various local charities.

“It’s always been a great pub,” says Tim, who’s been drinking at The Pineapple for 35 years – “not everyday,” he hastily adds. “There’s such a variety of characters in here now; from the second I walk through the door I’m overflowing with lovely feelings.”

For Tim, things have really improved since Poppy – the first woman to run the place in a good while – took over. “It’s the female touch,” she says modestly, “The Pineapple is an old fruit, and can get a bit grotty without a regular spruce-up. It’s the small things,” she says. “candles, fairy lights in the garden, water fountains, biodegradable straws and, well, keeping the toilets clean.”

Quite. There’s more to this watering-hole’s charm than that, though. From buying their veg down the road – all of which are ingredients for the Thai kitchen upstairs (run by the same family for the last 10 years) to giving small-scale breweries a tap or two, procuring their gin from nearby Ladies & Gentlemen, handing all proceeds from their weekly cheese night to the homeless, or collecting sanitary products for the local church – there’s a really sense of social responsibility at The Pineapple.

In fact, it’s an evident desire to give back to the community that has sustained, saved – harking back to the near-defeat by property developers a couple of decades back – and enabled this Leverton Street institution to churn so seamlessly on for all of these years.

Some will remember the Pineapple rescue operation in 2001. Ex-landlady Mary Gately sold the business after the passing of her husband, done under assurances that it would remain a public house. However, take-over owners Crossier Properties swiftly lodged a planning application to turn the whole building into flats, a move that crossed a line for Kentish Town’s passionate locals – and led to the launch of a grassroots campaign to save the adored waterhole.

Momentum grew from an 11-person committee to a 62-member hoard of determined pub-goers. The campaign was soon supported by the likes of Jon Snow, Rufus Sewell and Ken Livingstone, alongside artists, lawyers, writers, councillors, and builders. It soon pierced the national newspapers. Within eight days English Heritage listed the pub as Grade II, both inside and out – and the rest is, well, pub-saving history.

Since its dance with death 17 years ago, the place has been flourishing. “For me, it’s the staff who really make it,” says Poppy. “They’re all so different, charismatic and mostly creative types. The regulars want to know what play it is they’ve written, or what magazine interview they’ve had that week: it’s like a dozen teenagers with twenty concerned uncles checking in on them.”

So who are these uncles? “The old boys who’ve become part of the furniture, our very own terracotta army,” says Poppy. “On a Friday or Saturday night we can be maxed to capacity, with 250 people circulating around the place,” she says, “but no one touches the bar stools at the front: its an unwritten rule that that’s where the regulars will be.”

That said, “it’s such a welcoming environment,” adds Rob, Poppy’s right-hand-man, whose been working at the freehouse for a decade. “The second anyone new walks in, the locals go out of their way to make them feel at home.” A point affirmed by the effortless chatter emanating across tables, nods and smiles between every stranger crossing paths.

Some of the boys have been drinking here for in-excess of 50 years. The longest running stool-percher on our visit last week was Mike Hollis. “I first came here two years before England won the World Cup,” he says.“It’s a nice pub, it’s in the bricks-and-mortar, and has always had a welcoming atmosphere and that immediacy.”

The badge for the longest running regular, however, has to go to the infamous Pineapple Ghost. “It’s an old place,” says Rob, “it adds to the charm. Sightings and weird goings-on have been happening for so long now, it’s not even news anymore.”

The pub recently had a new member of staff standing at one end of the bar, and a shelf of glasses came crashing down on the opposite side. She instantly queried if there’s a ghost in here, to which Poppy simply responded: “Yeah, definitely.”

“The weirdest one,” she says, “was when I was alone one night after closing time. I texted Phil (Poppy’s fiancé who runs Tapping the Admiral) asking him to bring up a couple of bottles of tonic on his way in, as I had some gin in the flat. Minutes later I heard one door slam and then another, followed by footstep, footstep, footstep, coming upstairs. I assumed it was Phil – but then he texted saying he was still at Tapping.”

Shudder. Multiple people have said they’ve spotted the apparition, who, it is believed, is a woman. Perhaps it’s an old landlady, who can’t handle the idea of Poppy having to tackle a bottle of gin with no tonic. Or maybe it’s a defeated contestant from the Pineapple’s Easter bonnet competition – which, launched back in 1964, continues to this day.

Ghoulish speculations aside, to celebrate their century-and-a-half, this Easter the team are ready and raring to open their beer garden, fire up the BBQ and hide 300 Easter eggs around the place for this year’s bonnet competition.

Poppy points to the series of framed black-and-white snaps opposite one of the fireplaces, documenting the last 54 years of bonnet-based-frivolities. Pride of place goes to the iconic shot of Flo and Edi (above). Flo, on the left, won the 1964 contest; so, I wonder, did Edi acquire some spectral leanings in the face of her defeat?

Guess we’ll never know. Still, “it’s such a great weekend,” says Poppy, “the adults get pissed downstairs, while the kids make bonnets up top. It’s win-win.” You’ll be able to sample 15 cask ales – one for each decade – from 15 London breweries, some made especially for the occasion.

In short? This spiky old fruit just gets better and better.