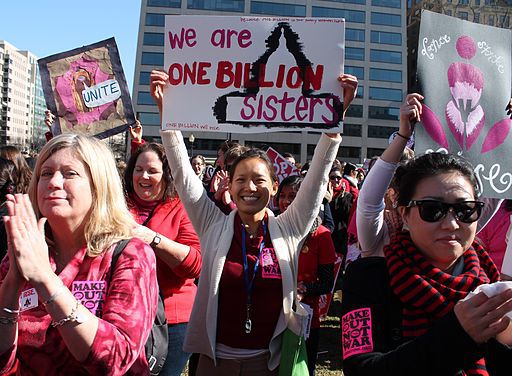 There’s a sexual revolution going on. How to move it forward? I’ve posted #MeToo on Twitter, regularly shouted at the radio over all the pay inequality hoo-hah and dragged my daughters (age 3 and 6) through the sleet to join the Time’s Up Women’s rally.

As a film journalist I’ve reported on Hollywood’s sex abuse scandal and cheered as A-list actresses took positive action in response: creating the Time’s Up fund to fight gender abuse across all industries. But what can I do right here in this corner of north London?

Answer: ask strangers to pay to watch me talk about my vagina. Nope, not what I was expecting either. I’m taking part in a benefit performance of Eve Ensler’s The Vagina Monologues. Proceeds will go to Solace Women’s Aid in Camden, which supports abused women and their children.

This 20th anniversary V-Day event (motto: Rise! Resist! Unite!) was instigated by Alison David, Wellbeing and Family Support Officer at my daughters’ school, Rhyl Primary in west Kentish Town. Alison’s never done anything like this before. Nor have I.

“I was just really angry with all that’s going on in the news,” says Alison, “and I wanted to do something.” That was less than a month ago. Since then Alison and her colleague, dynamic Rhyl TA Sarah Michael, have swiftly marshalled fellow-teachers, friends and friends of friends of all ages, shapes, ethnicities and gender identities. Hardly any of us have acted before. Now 20-odd of us are preparing to stand up and tell real women’s stories, all with a vaginal twist.

I’ll be honest, I had my doubts as to whether this would make for a great evening out at the theatre, but it’s proved utterly compelling to watch and incredibly empowering to be part of.

Alison is part of a Facebook group linking thousands of V-Day organisers worldwide. “They’ve told me that the response from the audience is really powerful and the need to talk to the cast is quite strong. People will often say ‘I’ve never told anyone this before’. It’s triggering for women.” Because of this, Solace is providing counsellors on both performance nights.

Solace recently had its funding cut, so any money raised will make a real grassroots difference. If you can’t make it on the night, please consider donating.

As Alison says: “It just feels so nice to take action and be part of a movement. It feels fantastic.”

This is box title
To donate, head here. The Vagina Monologues will be performed at Theatro Technis, 26 Crowndale Road, NW1. Thur 22nd Fri 23rd February at 7.30pm. Tickets are £11 & £7 concessions and can only be purchased online here.