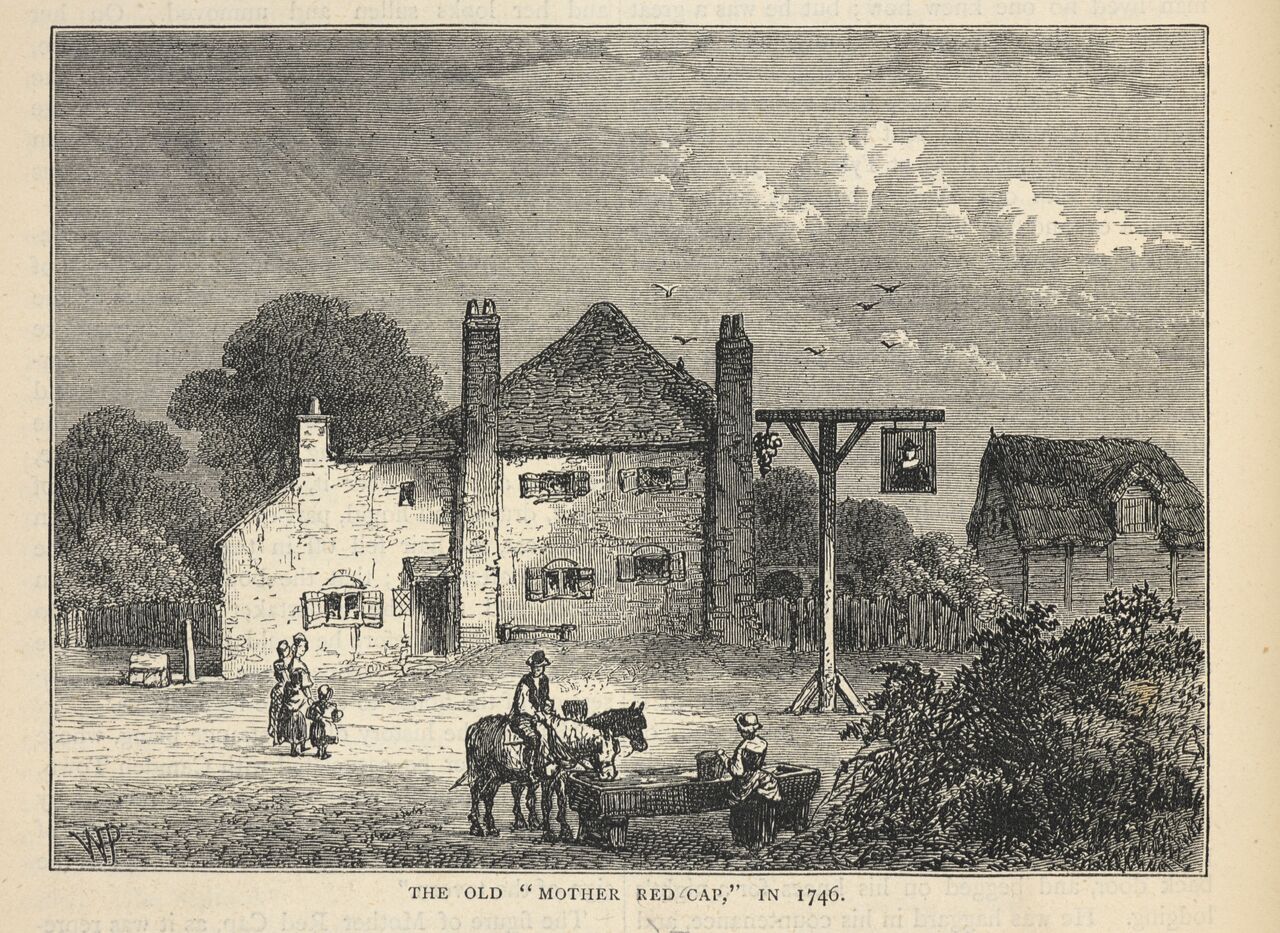 A brief history of Camden Town – in 10 pubs

Camden Town is famed for its pubs, from unreconstructed Irish bars to the most self-conscious of hipster hangouts. By 1830, the emerging suburb was home to ten pubs. Nearly two hundred years later five of these have survived, and five have closed.

The fate of these original drinking holes provides a pocket guide to 21st century Camden Town, much of which would still be recognisable to a passing early Victorian. Built around a 19th core, the history and fate of its original drinking places is representative of the place it is today.

The 5 lost pubs are The Bedford, The Britannia, The Elephant and Castle, The Hope and Anchor and the Mother Black Cap.

The Britannia occupied the corner building at Britannia Junction on Camden High Street and Parkway. The ground floor has been rebuilt as shops, but a figure of Britannia still keeps watch, seated between the fourth floor windows. The Hope and Anchor on Crowndale Road closed controversially in 2013, was squatted and now awaits conversion to housing.

The Elephant and castle, demolished after the Second World War, was located opposite St. Pancras Workhouse (now St. Pancras Hospital). Local 19th century historian Samuel Palmer claimed that it took its name from the Palaeolithic remains of what he described as an ‘elephant’, found near the Workhouse in the buried Fleet River in 1714. The elephant was probably a mammoth, but Conyers surmised that the Romans had brought elephants to Britain with them to scare the locals.

It is not to be confused with the Elephant’s Head pub, which now operates on the High Street, has no pre-historic connections and is named after the logo of the defunct Camden Brewery.

The Mother Black Cap closed in 2015, amid angry protests. It became a gay pub during the 1960s and developed into a legendary burlesque venue, the ‘Palladium of Drag’. It was temporarily reopened by squatters and campaigners have so far fought off attempts to reopen it as a chain restaurant.

Ironically, given its actual history, a fictionalised Mother Black Cap features in the film ‘Withnail and I’, as a terrifyingly unreconstructed boozer. The film’s title characters order “Two large gins. Two pints of cider. Ice in the cider”, a ludicrous proposition at least when the film was released, and are alarmed by sexually threatening graffiti in the gents before being chased out by a huge Irishman, with whom they foolishly make eye contact. The scene was, however, filmed in a now-demolished pub in Notting Hill.

The Bedford Arms was demolished in the late 1960s, its site at No. 88 Arlington Street marked with an inscription. The pub, known as the Bedford Tavern in the 19th century, was a place of resort with a tea garden, bowling green and shrimp stall among other attractions, but was famous for the daring balloon ascents made from its gardens.

A music hall, The Bedford, was built in the pub’s gardens and opened in 1861. It was the subject of numerous works by Camden-based painter Walter Sickert, who lived at No. 6 Mornington Crescent. Sickert painted the crowds, capturing the heavy clothing, the heavy atmosphere and the warm, alluring glow of the stage. His music hall performers are the first stars of Camden Town, including child singer Little Dot Hetherington, and Yorkshire cockney singer Vesta Victoria.

The Bedford closed in 1951, and makes a poignant final appearance in the 1967 film ‘The London Nobody Knows’, with presenter James Mason filmed picking his way through its derelict interior. It was pulled down shortly after, and the site now occupied by Camden Job Centre.

The remaining five 1830s pubs survive, although all their names have been changed. The Laurel Tree, on Greenland Street, is Brewdog. The Wheatsheaf, on the High Street, is currently Belushi’s. The Southampton Arms has become The Lyttelton Arms, renamed in tribute to jazz trumpeter and ‘I’m Sorry I Haven’t A Clue’ radio host Humphrey Lyttelton. The Radio Four show conferred cult status on Mornington Crescent with its game of the same name, defined only by its lack of any rules.

The Camden Arms, on Randolph Street, is now the Colonel Fawcett, re-named after the victim of possibly the third last fatal duel fought in Britain. In 1843 Lieutenant-Colonel David Fawcett, newly returned from China, argued with his brother-in-law, Colonel Alexander Munro, over property. They fought a duel in a field by Camden Road, where Munro shot Fawcett in the chest. He was carried to the nearby Camden Arms, where he died. Munro, convicted of murder, fled the country, but eventually returned when his death sentence was commuted.

The Mother Red Cap, controversially renamed The World’s End in the 1990s, can still be found opposite the tube station on the site it has always occupied. Before there was Camden there was the Mother Red Cap, a tavern at the junction of the Hampstead and Kentish Town Roads.

The 18th century version of the inn had a tumbledown appearance and a sign swinging from a gibbet-like frame, showing an aged, forbidding woman in a Puritan hat. It was a stopping point in empty countryside, halfway between Hampstead and London and it was reported in the 1840s that “The ‘Mother Red-cap,’ at Kentish Town, was a house of no small terror to travellers in former times.”

The inn seems to have developed a reputation as a default location for shady doings and unlikely local legends. On the death of Jinney Bingham, 17th century criminal moll and landlady known as ‘Mother Damnable’, “hundreds of men, women and children were witnesses of the devil entering her house”, according to Camden antiquary Samuel Palmer. It seems more than appropriate that the pub is now The World’s End, with the Underworld venue lurking beneath.

Tom Bolton is the author of Camden Town: Dreams of Another London, published by the British Library (£10), available here.