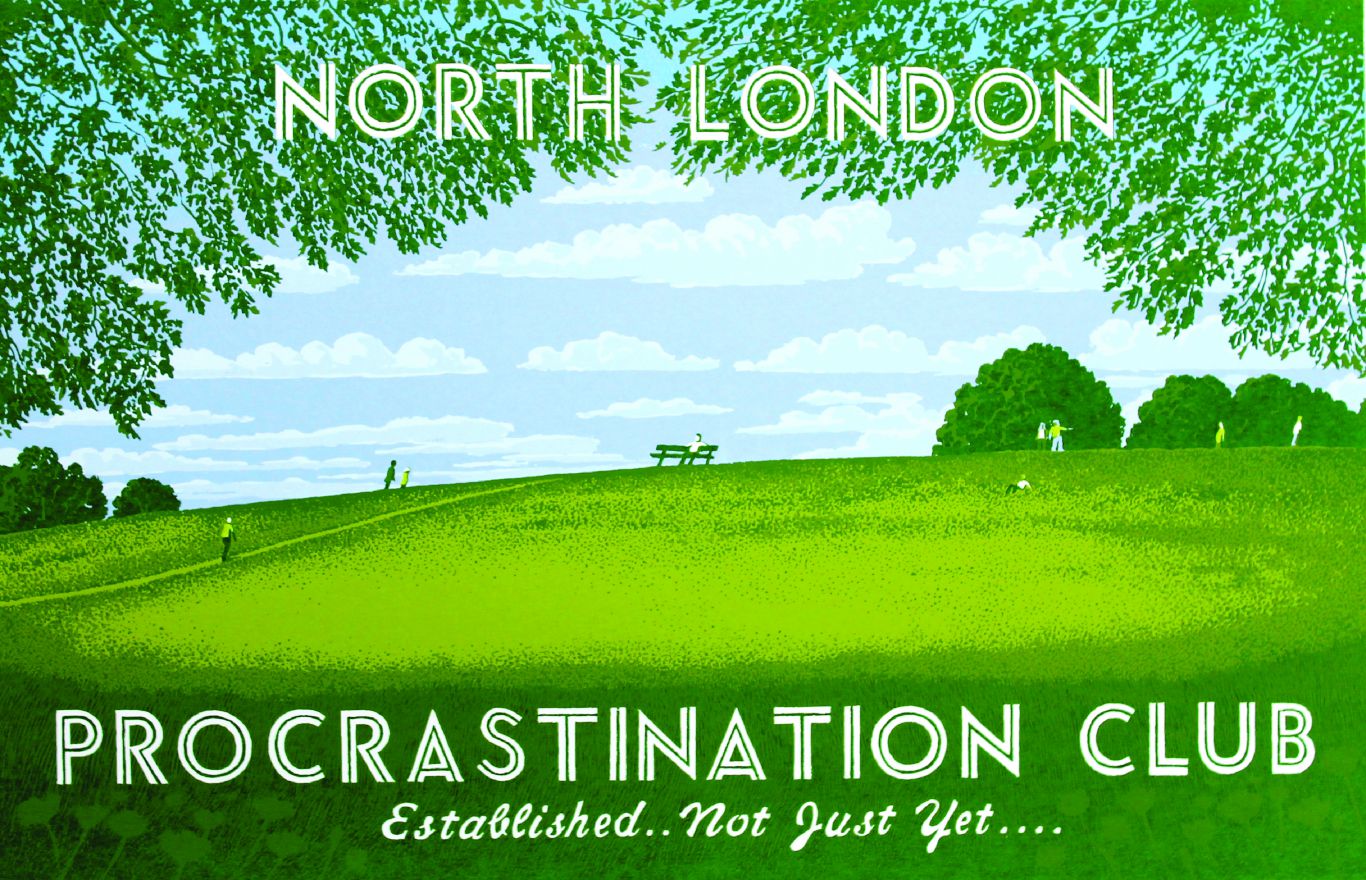 After finishing up at the Royal Academy back in the eighties, south Londoner Martin Grover has been plying his trade ever since. An enthusiastic screen printer, he paints directly onto the screen, eschewing photographic and digital processes.

“The prints can be quite simple or richly layered,” he says. “They mainly capture local cityscapes and greens, as well as more haunting and melancholic pieces based on songs, anecdotes and poems.”

Others reveal a wry and playful humour – as you can see throughout this feature. We tracked him down after enjoying his work at this year’s Affordable Art Fair on Hampstead Heath.

So what’s the story behind the Procrastination Clubs?
Like many people I have a predisposition towards procrastination, the art of doing something while avoiding the main issue. The South London Procrastination Club started out as the title for a show a few years ago. I did an illustration of a favourite hut in Brockwell Park (somewhere I imagined would be a sort of HQ for procrastinators) for a poster to advertise the exhibition.

Anyway, both the image and title seemed to strike a chord, and I decided to produce a limited edition 5/6 colour screen print – and thus the SLPC became almost an official organization.

It seemed unfair to leave north London out. Hampstead Heath, Parliament Hill and its views were an obvious choice as an image. West London followed, although I’m still procrastinating about the East End version. I’m sure one day they will all be unified but let’s not get ahead of ourselves.

Oh, and a New York Procrastinators’ print, produced for an art fair in the city a few years ago, fell rather flat on its face. New Yorkers I came to realise DO NOT procrastinate – or at least will not admit to it.

What do you like most about the Heath?
Actually, it’s unknown territory for me, compared to the green spaces of the south, but I love its wildness and size and its place as part of London’s cultural history. Kenwood House, the ponds and the poetry in the names, Vale of Health, Wildwood and Rotten Row are all inspiring.

And of course there’s the jewel in the crown, that Parliament Hill view, one that forms part of the great vistas of London you get from Alexandra Palace, Primrose Hill, Crystal Palace, Forest Hill, Shooters Hill and Greenwich.

This is box title
To  see more work check out our south London sister site Below The River.