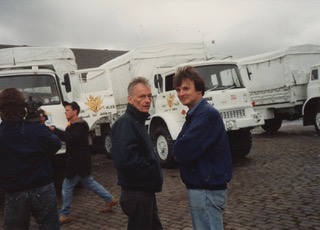 ‘I was sacked from War Child for exposing the truth’

After rebelling against a boot-camp boarding school in Dorset, I fled at 17 to work with a fellow rebel on a cattle farm in Argentina.

Six months later, I was back in the UK with my maté gourd and bolas souvenirs. I moved to north London and settled into a suburban life in Muswell Hill. Married with two children, I worked for 17 years as a teacher in further education.

Dissatisfied and missing the romance of my life on the pampas, I became an art agent for the naïve painter, Ivan Rabuzin. It was my association with this Croatian artist that led to my becoming a film maker.

After being commissioned by BBC Arena to cover the role of artists in the war raging across the former Yugoslavia, the director and I decided we had to help the child victims we had seen there. So we started War Child from an office above Burger King in Camden High Street, where we set up an ex-army mobile bakery that fed starving people in war-torn Bosnia. While being prepared for its journey, the bakery vehicles were housed in the Roundhouse car park.

When it reached its destination in the war-battered town of Mostar, its first manager was Archway resident, Jimmy Kennedy. He had learned his bakery skills as a guest of Her Majesty in Wormwood Scrubs – and, in fact, deserves his own memoir.

My connection with the Balkans had started with my tempestuous marriage to a Croatian, and ended as director of the Pavarotti Music Centre in Bosnia, helping young people traumatised by war through music therapy. At that time War Child’s patrons included Pavarotti, David Bowie, Brian Eno and Tom Stoppard.

The charity still emphasise their connections with the music world, but one of their first money-raisers involved not music but animals. Over the 1993 August Bank Holiday War Child organised a three-day event at London Zoo in Regent’s Park which serenaded both humans and creatures: Peruvian pipers performed for the llamas, didgeridoo players the kangaroos, and a Bach-playing string quartet filled the butterfly grotto. The Chinese percussionists were kept well away from the giant panda, Ming Ming, because she needed all her concentration to breed.

Central to the book, however, is my whistleblowing on financial misconduct in War Child, eventually exposed with the help of The Guardian and Jon Snow. I first discovered the mishandling of charity money over a pint in the Crown and Goose on Delancey Street. When Channel 4 exposed the story they filmed there; like many whistleblowers I was sacked from War Child for exposing the truth. The pub has long gone, replaced by a guitar shop: bad memories appropriately fading to music.

The Camden Town area has now been a fixture of War Child’s work for nearly a quarter of a century. The charity has moved from its first office in Greenland Street to Kentish Town. I too made a similar move north. At the start of War Child I and my second wife, the novelist and creative writing teacher Anne Aylor, lived in Lyme Street. Today we’re in Tufnell Park.

After the War Child years I was press officer at the Stop The War Coalition, working from their office in Britannia Street in King’s Cross. Every Friday evening I’d walk up York Way to King’s Place and help organise live jazz performances in the foyer.

After so many years surrounded by music I now play guitar and can be found helping out at Camden Guitars on Chalk Farm Road. The owner, Brazilian guitarist Deicola Neves, has become a close friend and travelled with me last year to Mostar in southern Bosnia to perform at the Pavarotti Music Centre. He has future plans for further cooperation with the centre. It’s good to see that its work and music has been twinned with a guitar shop in Camden Town.

Ultimately? I hope my memoir will be a reminder of how destructive war is – and how we can all play a part in fighting for a better world.

Left Field By David Wilson is published by Unbound and distributed by Penguin Books. Available at Waterstones and on Amazon.