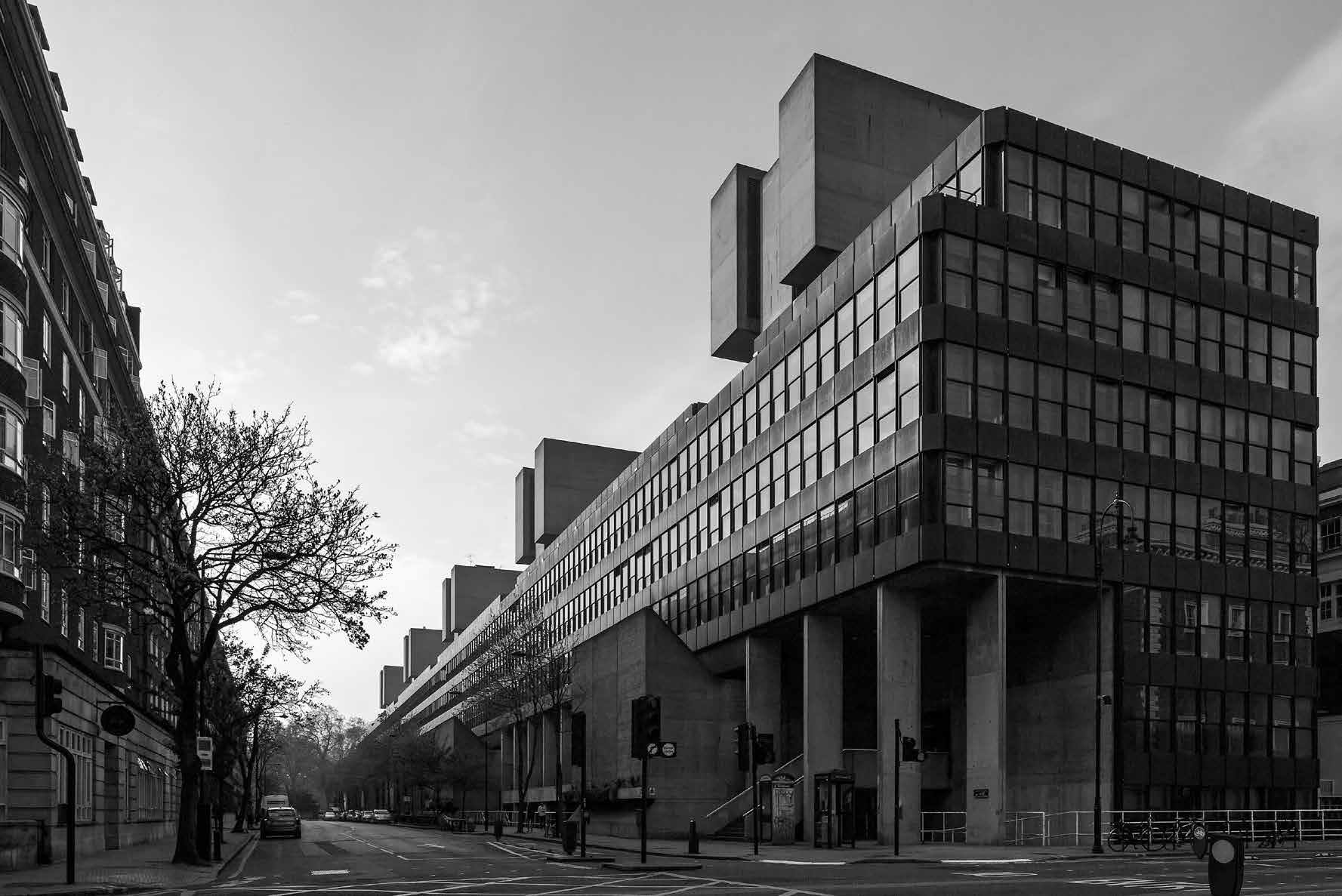 Raw concrete and the imposing mass of Brutalist architecture is undeniably part of the fabric of London’s landscape – both visual and social – and part of our collective urban history.

Momentum is now growing to celebrate, reclaim and preserve buildings which were once written off or allowed to decay. A new collection of unique and evocative photography by Simon Phipps casts the city in a new light.

Arranged by inner London Borough and with full information on all buildings featured, Brutal London takes in famous examples such as the Trellick Tower, the Brunswick Centre and the Alexandra Road Estate, as well as lesser known housing and municipal spaces. It serves as an introduction to buildings the reader may see every day, an invitation to look differently, a challenge to look up afresh, or to seek our celebrated Brutalism across the capital.

Milton Keynes-born Simon Phipps is a photographer and the creator of the New Brutalism collection of photography on Tumblr, Instagram and Twitter. He is a graduate in sculpture from The Royal College of Art. In the extract below, he focuses on the borough of Camden.

Find out more about video ads for your business
“The new council of Camden formed in 1965 had the necessary circumstances for creating housing of the highest quality – visionary borough architect, Sydney Cook; a pool of passionate and talented young designers; and a substantial housing budget. Camden’s enlightened policies, implemented through excellent and innovative housing resulted in an increase in social housing and an improvement in the residents’ quality of life.

The Alexandra Road Estate (pictured top) is an extravagant and grandly ambitious comprehensive redevelopment of a 15-acre site in South Hampstead. The development comprises three parallel linear terraces of varying heights, the tallest of which is built as a ziggurat. The stepped section acts as a buffer to sound and vibration from the West Coast Mainline railway that bounds the north of the site.

Built from in situ concrete – that is, cast on site in wooden formwork – the estate is an exemplar of Camden housing and Neave Brown’s principle of low-rise high-density development, in contrast to the tower blocks still commonly commissioned by many borough councils of the time. One of the last of Camden’s major housing projects, it was built on a scale that won’t be seen again.

The Brunswick Centre comprises two linked blocks of flats, O’Donnell Court and Foundling Court, along with a cinema, shops and car parking facilities. It was initially planned as a private development and derived from studies carried out by Hodgkinson with Sir Leslie Martin into low-rise high-density development.

Due to financial constraints, the housing element of the A-framed megastructure – its service, stair and lift towers (strongly evocative of Futurist architect Antonio Sant’Elia’s work) – was leased to Camden Council, where Hodgkinson’s ideas were to have a strong influence on the council’s architects in future projects.

Hodgkinson returned as architect with Levitt Bernstein for the refurbishment of the Brunswick Centre in 2006, and was finally able to accomplish his vision of the concrete and rendered surfaces being painted to match the surrounding Regency terraces.

Maiden Lane was the last major Camden housing development and the last to be commissioned by borough architect Sydney Cook who, during his eight-year tenure, 1965–73, had overseen a hugely ambitious building programme of unsurpassed quality and scale. This large estate, built on a former rail goods yard, comprises 225 dwellings bounded to the south and west by railway lines, to the north by Agar Grove and the east by York Way.

The white painted terraces of Corbusian-inspired architecture run north to south in parallel blocks. Stepping down the gently sloping site, they also display the influence of Atelier 5’s Siedlung Halen housing near Berne, Switzerland. The railed terraces, turreted rounded stairwells and spiral steps have a distinctly nautical feel. Access to the estate was limited by ongoing planning issues, and a changing political and economic climate resulted in a sense of isolation.

Years of neglect have taken its toll and the estate is undergoing regeneration. Parts on the York Way side of the estate have already been demolished and redeveloped to designs by PRP Architects.

Built to a substantial budget, the Royal College of Physicians building cemented Denys Lasdun’s reputation as one of the foremost architects of the time. Designed to provide both ceremonial and day-to-day functions, the building also had to fit within the surrounding John Nash Regency terraces. This was managed by the interplay of forms and the contrasting use of white mosaic, echoing Nash’s stucco, and the dark blue engineering brick.

Borough architect Sydney Cook had been impressed by Peter Tábori, a young Hungarian architect, and designs made as part of his student diploma scheme were ultimately commissioned by Cook and became the Whittington Estate. It consists of six terraces articulated by strongly horizontal balconies and punctuated by the verticals of the stair access. Between the stepped terraces on the sloping site are walkways and tranquil green spaces with existing trees and informal, unregimented planting that soften the hard geometries of the architecture.

This is box title
This is an edited extract from Brutal London by Simon Phipps (September Publishing, £14.99. Buy in your local book store, or order from The Guardian Bookshop here.