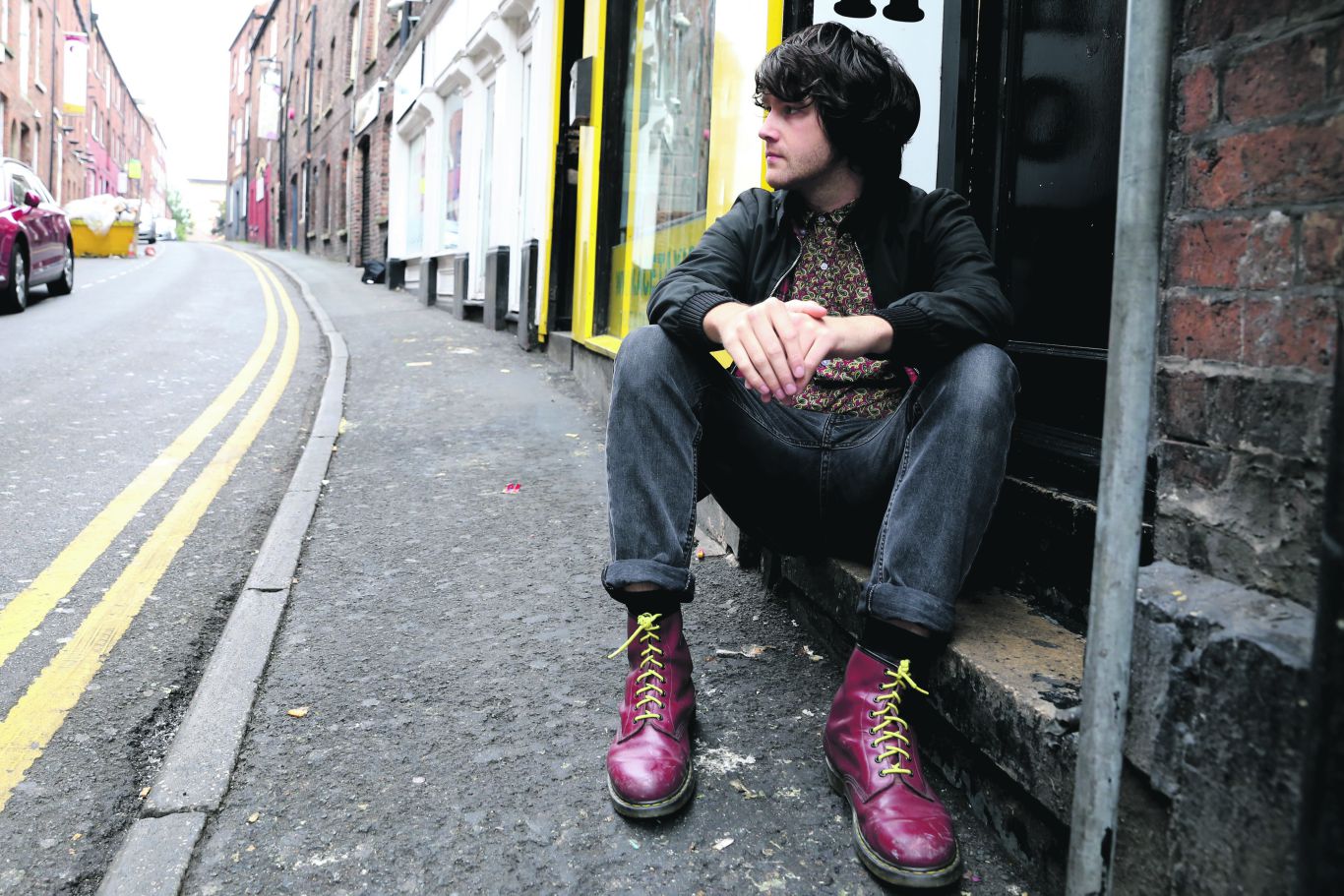 Tucked away on leafy Gaisford Street, the tiny Lion & Unicorn theatre is nothing short of a cultural gem in the neighbourhood. A long established playhouse, it punches pretty high, with a focus on contemporary plays and new writing.

And a regular monthly night, which takes place this Sunday (19th Feb), is set to broaden its appeal further. Spit & Polish is a spoken word jamboree with an always eclectic line-up.

“Of the three nights we have put on so far, two have sold out,” says producer and playwright, Oliver Gamblin. “The audience so far has been a made up of a mix of people who have been to similar nights before and those completely new to the experience,” he says, “and that’s the way we like it.”

Below we meet the four young stars of the next show: Selina Nwulu, Keith Jarrett, Megan Beech and headline Matt Abbott.

A politically active poet, Matt’s the driving force behind spoken word label Nymphs & Thugs. His debut Edinburgh show earned rave reviews and full houses in 2015, and was followed by a 22-date national headline theatre tour with A Firm Of Poets.

How did you start?
I was a 17-year-old lad living in West Yorkshire, mid-way through my A-Levels and eager for something to say. Through studying politics and watching a few Bill Hicks DVDs, I was convinced I was qualified to put the world to rights, and from battling through high school, I’d learned to be quick-witted and use attention to my advantage.

The local music scene was thriving in 2006, and with fellow Yorkshire lads Arctic Monkeys on the ascent to superstardom, it felt like a cool place to be. But I can’t sing or play guitar.

And then one day, I came home to hear my dad playing a John Cooper Clarke CD. This guy was an unashamedly working class poet, dressed like a beatnik, and delivering witty poetry to a punk crowd at breakneck speed. My life changed in an instant, although obviously I didn’t realise at the time.

What do you like about spoken word?
What I loved then is still what I love about it now: it’s instant and accessible. You don’t need lessons or equipment. You just need to be literate, intelligible on a microphone and have something to say. I could write a poem at 4pm and perform it on stage the same night. Somebody could feel inspired at a gig, go home and then write a poem for the first time in their life. And you don’t need to appreciate chord structures or intricate instrumentations – I mean sure, there’s a lot of form in poetry and a lot of room for clever literary devices or references – but essentially, you don’t need to know anything about poetry to be instantly and powerfully affected by it.

You’re a political poet, too?
The urge to speak about politics has never left me, and ten years on from writing my first poem, I toured theatres nationwide in support of Jeremy Corbyn alongside some top name comedians including Sara Pascoe, Francesca Martinez, Mark Steel and Jeremy Hardy. I realise that Corbyn is a ‘Marmite’ figure, but my point is that spoken word and comedy are increasingly vital nowadays for commentating, challenging and satirising.

Whilst it was largely horrific, last year’s referendum engaged an incredible number of people in politics. And with the election of Donald Trump over the pond, people feel the need to be checking news sources more and more regularly; it’s becoming increasingly impossible to ignore the political landscape. And I think that poetry is vital in terms of lending voice to a lot of people’s concerns – whether folk find comfort in listening to a poet, or whether they’re driven to start writing themselves.

How would you describe your style?
I like to think that it’s very accessible and engaging to novices as well as regulars, largely because I’m influenced by lyricists as opposed to classic poets. I’d cite Billy Bragg, Morrissey, Bob Dylan and Robert Smith above anybody in my GCSE Anthology. Most people – especially folk from West Yorkshire mining families like mine – think that poetry “isn’t for them”. But it absolutely is, and it always will be. And that’s why it’s so amazing to see this current spoken word resurgence. Long may it continue.

1. It’s imperative to find your own voice. This will of course develop and change over time, but your words should be said in your own unique way. There’s a bit of a “poet voice” epidemic at grassroots level, and a lot of folk will switch off to it regardless of how good your words are.

2. Don’t be too keen to publish everything you write online. You might have six poems in your arsenal and be thrilled with four of them, and satisfied with two. So only share the four. Imagine your idol going onto your blog, SoundCloud or YouTube channel – would any of the poems on there make you cringe? If so, remove them.

5. It isn’t a given that you need to be published or do an Edinburgh Fringe run to be considered a “proper poet”. I cut my teeth at music gigs, music festivals and political events. Do your own thing. Poetry is wonderfully flexible in that sense.

A writer, poet and performer, her first chapbook collection, The Secrets I Let Slip was published by Burning Eye Books in 2015. She was Young Poet Laureate for London last year, a prestigious award that recognizes talent and potential in the capital.

Why poetry?
I grew up in Rotherham, South Yorkshire and have always written poems. My sisters got me to write them when I was younger, presumably to keep me occupied. So it’s something I got very used to doing and continued to do as I grew older. I think poetry is a very good way of noticing. Whether it’s a feeling, an object or an incident, a poem is a good way of providing a snapshot into something. I’ve always been drawn to that.

How did you start?
I wrote poetry whilst growing up, but it was a very private thing. I came to London, where I live in Lambeth, about six years ago and met poets who were very encouraging of my work. They recommended I start performing and taking it more seriously.

What advice can you give budding poets?
The beauty of poetry is that it can encompass a wide variety of styles and voices. Have the confidence to find your own style and your own way of writing.

A performance poet, Megan was the winner of the Poetry Society’s SLAMbassadors national youth slam in 2011. Her debut collection, When I Grow Up I Want to be Mary Beard, was published in 2013, chronicling her experience as a young feminist and the fight for female voices to be presented in mainstream media.

What does poetry mean?
I have always cared about words, their power to enrich our lives and to make us think and for me poetry acts as a very direct way of communicating about the things we believe in to other people. Most of my work focusses on feminism and depression, two themes that I still think are often considered taboo, or difficult to publicly discuss; and I think poetry offers a way to speak freely, openly and directly about these issues.

Where did you start?
I began performing poetry when I was a rather shy, introverted 17 year old in Somerset, where I grew up (I’m now 23 studying a PhD in Cambridge). I used to go to a lot of open mic nights in my area and slam competitions and just watch others, soak up their words and sort of try to learn from what other artists were doing. I also got my start by going and performing at nights like that.

What advice can you give budding poets?
My advice to budding poets is GO FOR IT! Perform as much as possible, listen to other poets. Write about things that you are truly passionate about (not just as a crowd pleaser). We live in dark political times, and I think now more than ever we need poetry. As Percy Shelley said 200 years ago: “Poets are the unacknowledged legislators of the world.” Make your voice heard.

In 2010, Jarrett simultaneously held the title of London and UK Poetry Slam Champion. Keith’s poetry pamphlet, I Speak Home, was published last year. He is now a PhD scholar at Birkbeck University of London, and completing his first novel.

How did you get started?
I was fortunate to grow up in a family where reading was encouraged, and had teachers who nurtured creativity. I was also a massive hip hop head as a teenager, and started attending poetry slams and open mics at uni. And then I became part of the Spoken Word Educator programme: that changed my life.

What advice can you give budding poets?
Never tell a stranger that you are “a poet” unless you have the patience of a therapist. Never take yourself too seriously. Always take your work seriously; spend time editing and taking criticism from people you trust. If your own work doesn’t make you laugh, cry or move you profoundly in some way, don’t inflict it on an audience.

With that in mind, take emotional risks; much of what you write should frighten or shock you in some way. Don’t just go in for shock value. Shorter is better. If you’re writing for the page, go even shorter than that! Delete, delete, del–. Your poem actually ended a stanza ago. Read widely, even bad poetry. Figure out what makes it bad and learn from it.

Support other poets: other writers are the people who buy the most poetry. Don’t expect to become famous as a poet. Never accept a contract to perform in a club in between DJ sets, no matter how cool that sounds.

Actually, do – that will give you some perspective. Seek out supportive spaces where you can share your work; there are so many open mic spots in London and one of them has a slot waiting for you to sign up in. Follow writers you like on social media and don’t be too embarrassed to approach them.

Consume unrelated art that your contemporaries are making: films, visual art and music, for example. Collaborate where possible; you’ll be more successful if you branch out.

Also – and this is advice that I’ve heard but can’t remember who to attribute it to – if you have any other interest, go and pursue that, rather than dedicate your life to poetry. It’ll only bring you heartbreak.