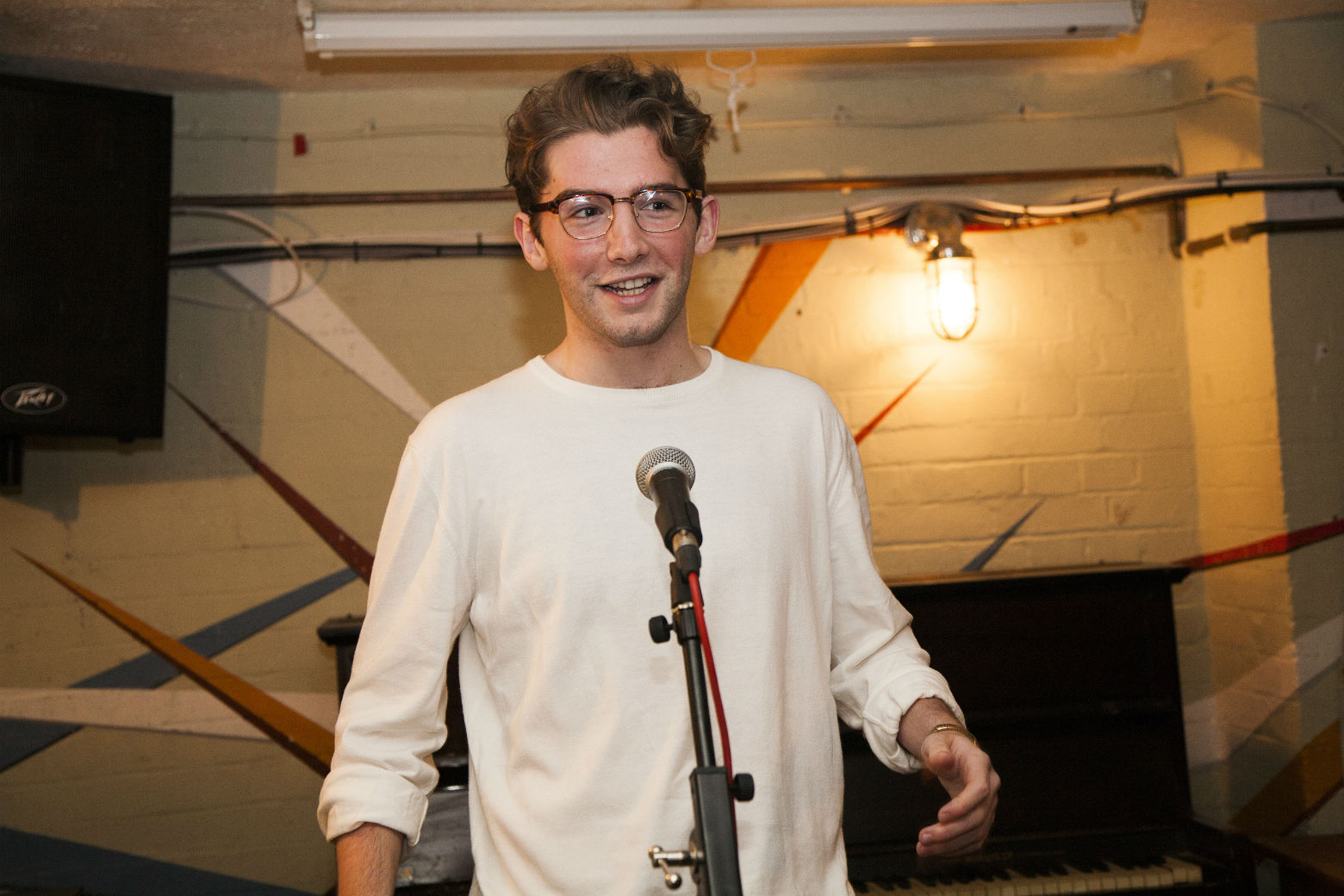 I had walked over the threshold of my local pub, The Rose & Crown on Torriano Avenue, possibly a thousand times (I know, what a legend). But this time felt different, akin to going over the top of the trenches.

I wasn’t to hear the deathly whistle for around two hours, but I could already feel my heart rate jump as I came through the door, my palms growing sweaty. Theo, one of the owners, was behind the bar, and we exchanged mirrored wry smiles; we both knew what tonight was. My first stand-up gig.

I suppose I’ve reached the point of desperation (and arrogance) where my only hope in life is to command the attention of strangers, confident in the fact that listening to me is exactly what they should be doing with their precious time.

I ordered my customary Titanic Stout: creamy, smoky, dark, and most importantly at this time, alcoholic. As the thick black nectar settled I took out my trusty Ted Baker moleskine notebook (champagne socialism’s great, isn’t it?).

It’s full of jokes, well I think they’re jokes…I hope they’re jokes. Please God let them be jokes. My eyes began to interrogate the pages, cues and directions I’d written down, which may as well have been in hieroglyphics, the jokes themselves fused into Sanskrit.

“I have no bloody idea what any of this means or says. Is this normal?” I thought to myself, “Is there a condition where you forget all previous knowledge of written language when you are nervous? Well at least if I have that I can make a joke about it. I just can’t write it down.”

It was just shy of an hour before the night was due to start. I was at the Freedom Fridge open mic comedy, one of London’s most popular, regularly attracting seasoned comedians – and me. I have no idea why I thought this would be a good starting point, as having been to quite a few of these nights, I’d realised the standard is very high – very funny. I began saying my fifth rosary before I was interrupted by Fat Jesus, also known as the man behind Freedom Fridge, Andy Onions.

“BREEEENDAAAAAAAAAN!” He screamed in his inimitable gregarious manner, alerting passing deaf people and warning off impending cruise liners. “Nervous or excited?” He asked.
“Is there a difference?”

“Ha! Good man! I’ve got you going on in the middle of the second act, is that OK? People are usually drunker then so they might just find you funny.”

And with that he hopped off around the pub, selling the free comedy night to the patrons and clarifying the running order with the comics dispersed intermittently throughout the boozer. They all looked so calm. So impossibly calm.

After drinking three pints of Titanic Stout at a well-above-average pace, the battle cry was sounded by Onions, signalling that it was time for comics and revellers alike to descend into the basement for a night of laughter.

I took my place anonymously in a comfortable armchair in the pitch black back corner of the room; only ten rows of seating separated me and the staging area, but it was enough for me to pretend that it was an unconquerable distance and everybody would understand me forfeiting my slot, rather than risk a Shackleton-esque trek ten metres to the stage.

The night began with Andy’s trademark high energy style, delivering jokes as if he had somehow been stealing power from the Hadron Collider in Geneva, hilarious and unforgettable.

Onions steadily introduced comedians to the stage, each of them delivering terrific performances in the impossibly short five minute slots that they are afforded, a period that I felt was going to get a lot longer as soon as my name was called.

After about forty minutes of belly laughs the crowd dispersed for a break, and I found myself at the bar nervously sipping at another Titanic Stout and wondering why I chose a drink with such a foreboding name.

The place was abuzz: those that had performed were high on adrenaline, and those in the crowd were merry in their laughter and alcohol. Everyone was having a great time – but me, I still hadn’t deciphered what all those scribbles in my notepad meant, language still hadn’t returned to me. Seemingly a minute into the break and Andy sounded the death knell announcing that we were to return to the cellar. My mind wandered again. “This is getting too close for comfort. Is it too late to back out?”

I retook my place in my shadowy arm chair and selfishly began praying that the two comics before me were as unfunny as EU regulations regarding pillowcases. Inevitably my prayers weren’t answered and the first act was hilarious, an Aussie one-liner that had me in stitches. He was followed by Sean Burke, a chipper young Dubliner with a great future.

It was time to go over the top. I floated to the stage area, lit only by a few candles due to a malfunction with the lighting (as you can see if you watch the Youtube clip below). I didn’t know my material off heart and I couldn’t read it in the dark, so I was forced to stand at the microphone and break it to the audience.

“I hope you weren’t expecting Live at the Apollo, folks. The lights are broken so you’re just getting a young scouse lad reading jokes from a Ted Baker notepad by candlelight.”

People are laughing. What is this? Am I actually funny? Is this going to be OK? My opening quip has gone down well, maybe they might even like my actual written jokes. Let’s try one…

I wrap it up and thank the audience for listening to me. That was fun, I think? I don’t know. Did I imagine the laughter? Was it as loud as I hope? I make my way to my seat amidst a couple of pats on the back and congratulations.

After two more hilarious acts the night was done. I admit that for shame I couldn’t pay much attention to the final ones, my mind was still high off the buzz of telling jokes to people.

I raced to the bar with an ear to ear grin as soon as the comedy finished. All the comedians were gathered at the bar, buying each other drinks, telling each other how much they enjoyed each joke, offering helpful criticism. Everybody was in good spirits like before – only this time I’m with them.

I can comfortably say that getting up on stage and telling jokes to people was the stupidest idea I’ve ever had and yet I couldn’t regret it less. The sound of laughter gave me a buzz I’ve never felt the like of before; I’ve quickly become addicted to it, constantly looking for my next hit of audience appreciation. I’d thoroughly recommend it.

This is box title
The Rose and Crown (71-73 Torriano Ave NW5) has a number of weekly open mic and comedy events along with various Edinburgh fringe previews. For more details click here.