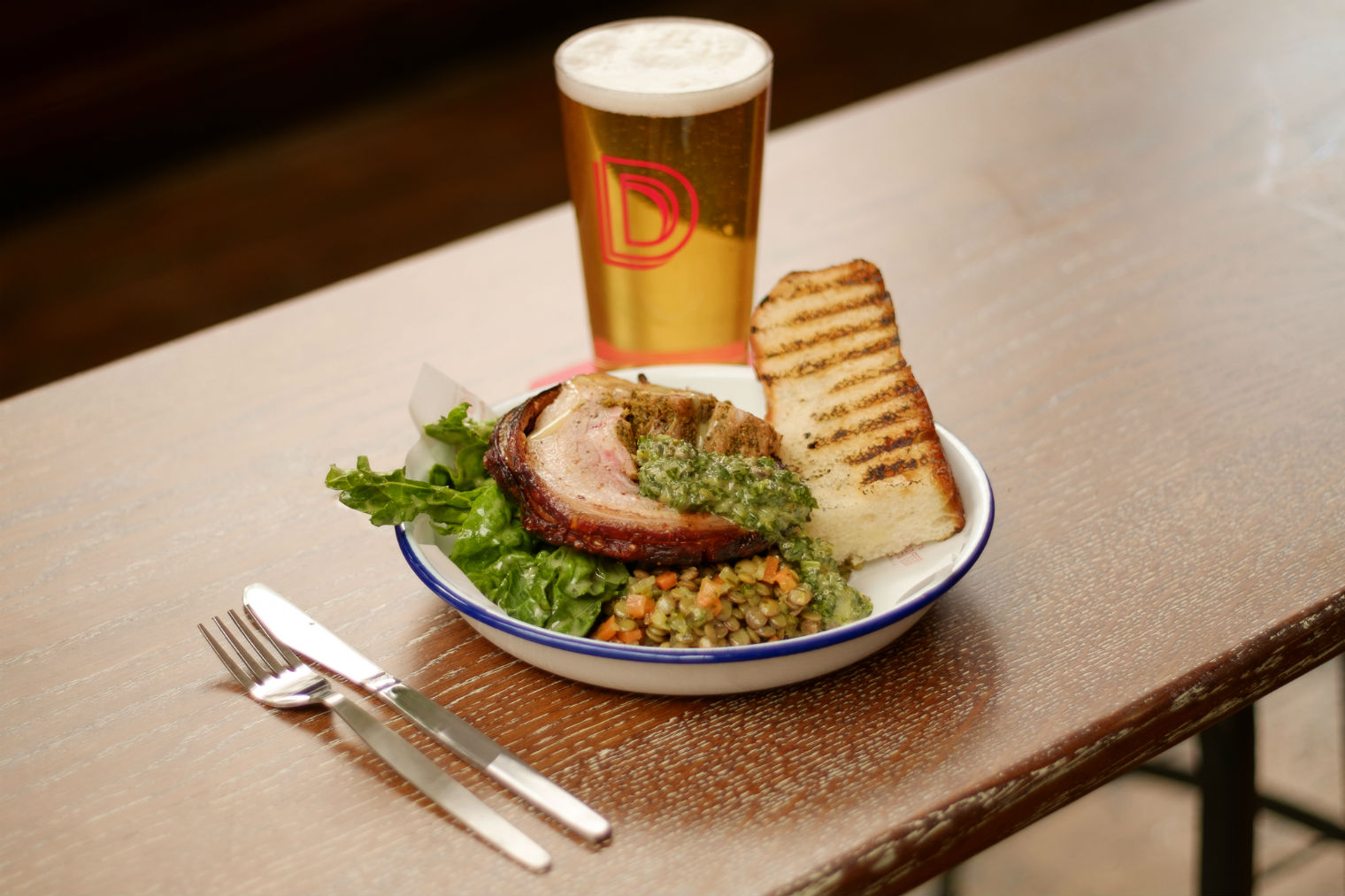 As we reported recently, there have been a few changes over at Camden Town Brewery’s newish outpost of late. The upshot is that the pub has binned its kebab menu, probably wise with you-know-who selling ’em by the bucket load next door. Long live E.Mono!

Their new thing is a Robata grill: meaning “fireside cooking” in Japanese, it’s a method of slow-cooking over hot charcoal that goes back centuries, and has now of course been adopted by a succession of recent grill-focused openings across the capital.

With “sustainably sourced meat” from Paddock Farm and Butchery in Oxfordshire, and a minimal, user-friendly menu created by head chef Bruce Wilson (who launched the restaurant at Tate Modern) the revised Daughter concept is to offer whatever the farm sends over that day marinated to match a selection of fairly health-conscious salads, garnishes and sides.

If that all sounds a bit highfalutin, believe us, it isn’t, with most dishes well under a tenner, and good-value homemade sausage rolls and pork pies on hand for bar-snack obsessives.

Inevitably, there’s also a weekend brunch menu with the likes of hash brown and eggs, sausages and bacon, plus coffee beans from top nearby caff The Fields Beneath. And the interior has had a spruce-up too, with German beer hall style tables and benches installed to accommodate more punters: in fact, the place now feels bigger and lighter, with the heavier banquette seating ripped out.

We don’t need to add that the draft is pretty good too, but what you might not know is that it’s not just own-brand Camden on tap; there are also the likes of Brooklyn, Fourpure, and Monk & Rooster.

And we’ve also enjoyed a gluggable house red (£4.60 a glass), served a touch chilled, a surprising winner on a rare warm day.

5 plates we recommend you try…

Every day the rotisserie special is chalked up on the blackboard. On our lunchtime visit it was porchetta, which is basically the Italian version of hog roast, slow-cooked here for a leisurely ten hours and stuffed with garlic and herbs (and a bit of salt). With each main you can either plump for a bun or two side salads. We had it sliced and served with a zesty salsa verde, the rather life-affirming green sauce comprised of basil, parsley, anchovies, capers, lemon juice and garlic. A chargrilled slice of chewy sourdough completes the plate.

This on-trend idea is really just a clever way of barbecuing. Here the chefs use IHL (India Hells, Camden’s strongest lager, an eye-watering 6.2% ABV): half a can of beer is made into a basting BBQ sauce, with the can itself (containing the other half) sitting on hot charcoal, and the chicken perched on top of that. The result is that it steams the inside, keeping the chicken nice and juicy, with a crispy blackened skin. To accompany this we chose a robust smoked aubergine with hot pepper salsa, chargrilled seasonal vegetables, and a really tasty pomegranate tabbouleh.

Vegetarians will know that this semi-hard Cypriot cheese is a wonderfully versatile cooking ingredient, pairing a unique texture with flavour – and most importantly holding its own on the grill. Here it comes breaded and pan-fried. The result? Meltingly soft, the perfect foil to a creamy slaw of crunchy fennel, bitter radish and sweet apple.

A light enough main, perfect for lunch: sturdy but fresh brioche, earthy baby gem and a tangy tartar sauce – with a crisp piece of breadcrumbed fillet. A nice touch is that the chef uses day-boat caught fish, so it varies from cod to pollock or whatever is caught and delivered that morning.

If you’re a dessert-kinda-person you can get stuck into soft-serve with raspberry sauce, gummi bears, or even bits of Flakes and Crunchies. But we particularly admired the home-made lemon meringue pie flavour, which had real citrusy depth. Don’t forget to take that hike on the Heath afterwards.

Lunch is about a tenner a head; more with beer or wine. Find Camden’s Daughter at 289-291 Kentish Town Rd, NW5