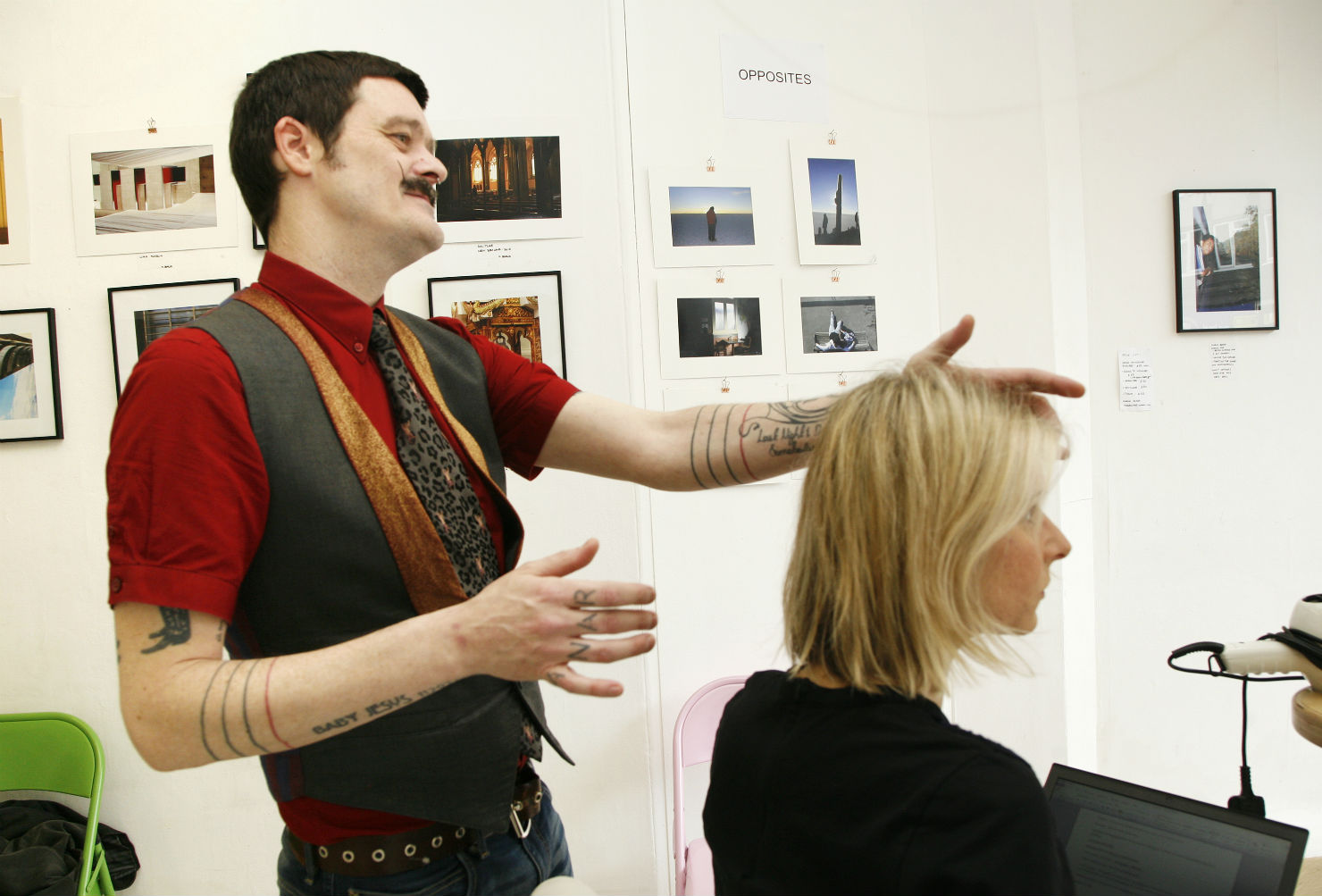 I can’t decide which is the more interesting view through the mirror; the art on the walls, what is being done to my hair, or stylist Conrad Andrews whose bold tattoos and majestic moustache makes him a perfect addition to well-known art gallery and hairdressers Flaxon Ptootch, who have graced Kentish Town Road for well over two decades.

What is your moustache style? There’s no particular look at all, it just is; though I suppose you could say it’s a bit Dastardly and Muttley.

Would you describe yourself as a creative? Art and creativity are big areas of my life; as well as styling hair I also make clothes and jewellery. When I was younger, I wanted to be a fashion designer, but at 16, living in Glasgow with no job, I went for a position in a hairdressing salon instead. I soon realised that if done well it can also be an art-form.

Are you a trend-follower or leader? When I first came to London, I worked at Antenna in Kensington, which created the first Monofibre Hair Extensions back in the early 80s. I knew that I wanted to be as good as I could be in all areas of styles. Now, I like doing colour. There’s a science behind it: you’re using chemicals and you have to take so many factors into account like where the client’s hair ‘is,’ where they want to take it, and whether you can achieve this without them leaving with it in a bag.

So why Flaxon Ptootch? I’ve worked in Camden for 18 of my 22 years in London. Recently I took some time out, but eventually wanted to get back to a salon; the fact that I’ve known Michael Ptootch for 15 years, and that his place is also an art gallery, was a huge incentive for me.

Who are your clients? I have kept many of them for two decades, so we are friends. Many people who come in know what they don’t want; some like the classical haircut and others are open to being a bit more adventurous. I wouldn’t do anything that I thought wouldn’t look right or was going to damage their hair. It’s about being honest with people about what they can and can’t do. You need to be realistic, and most people are.

What are the biggest hair mistakes? People cannot colour their hair at home. When they see that box on the shelf with the bright picture of lovely hair, they need to know they will never achieve that themselves. The result will always be they have to get it fixed in a salon. People think they can slap something on their hair, wait 30 mins then they’re going to look like Pamela Anderson; they will probably come out more like Big Bird.

What do you do when you’re not styling hair? Art galleries, and hanging out with friends. I live in Archway; I used to live in Kentish Town, nine or ten years’ ago and I can see real changes. It’s definitely more gentrified and many of the little old men’s clubs have disappeared. If I go out, it’s to the Pineapple, as it’s tucked out of the way.

How else has the area changed for you? There used to be an old-fashioned haberdashery that sold everything from string vests to uniforms, which disappeared as have many of these independent places. Where now do you buy a string vest from?

My cut is not as edgy as Jennifer Lawrence’s, which is what I asked for. Why not? They’ve kept it too safe by making it a bit longer at the back, which gives it that twee look that you don’t want. It needs to be longer at the front; that will make it more edgy.

Would you dye my hair silver? No, I think it would probably wash you out.