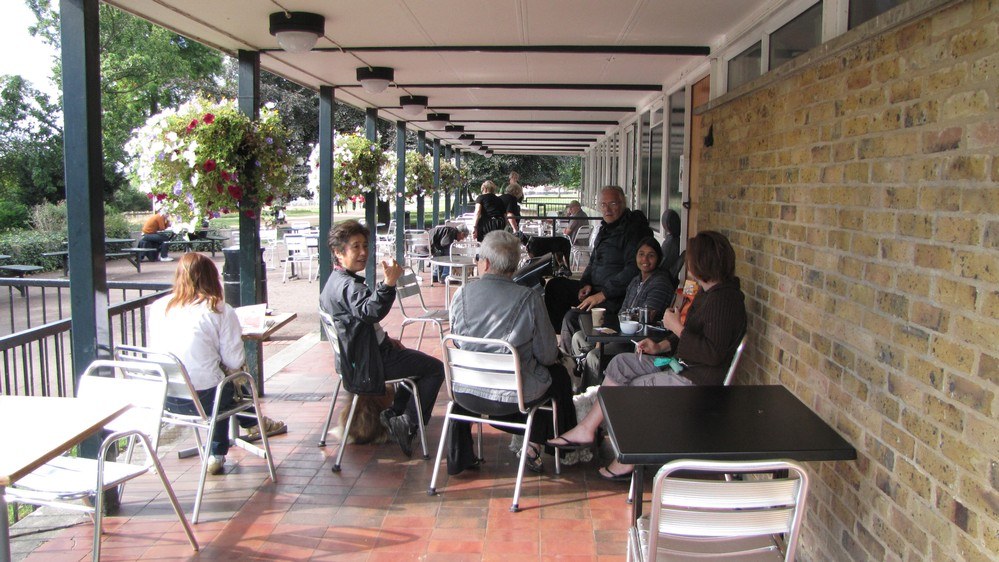 So you may have heard by now that Starbucks are not taking over the empty newsagent next to Beef & Brew on Kentish Town Road, their plans thrown out by the council, who insist that it stays a retail unit.

But another fairly big – though admittedly not quite Starbucks size – chain has just pounced on a longstanding NW5 operation up the road. The City of London, who manages the Heath, has awarded the new Parliament Hill bandstand cafe contract to Benugo, the company who run the food offer in public spaces across the capital, from the Barbican to the British Museum and Regent’s Park.

The problem for many residents is that the space has been run by the D’Auria family for thirty years, and is a firm community favourite. And you lot ain’t happy: we’ve had more emails and tweets about this than almost any other change of hands in recent history.

“The D’Aurias have put their heart and soul into producing delicious food for all ages at low prices, and have been a treasured part of many families’ memories of summer outings to the bandstands,” says Sheila Hayman, who wrote our recent article Why I Am Queasy About Starbucks Opening On My High Street. “Who’s going to look back nostalgically on a trip to Benugo?”

Hayman believes that while the City have a duty to run services in the most cost-effective manner, “what about their duty to society and community?”

Another reader, Jo Johnston Stewart, asks “why would those who use the innovative restaurant want to be constrained by the boring choice that chain outlets offer? For all that such a company will have ‘central support’ I doubt that, on snow days, they’ll be able cheerfully to accommodate the hoards that descend for hot chocolate and a bowl of delicious risotto, steaming pasta or omelette and chips.”

Johnston Stewart also wonders “if Benugo will be pleased to provide a pot of tea for £1 to the less well off who want a warm, happy place to sit on a cold day? Will they know at a glance that this customer likes her delicious coffee (among the best in London) not too strong? The public were not consulted. It seems the Corporation forgets they are public servants, and that that this public is happy with the seamless service and admirable value the D’Aurias provide.”

Stuart Jones, who got in touch on Twitter, is upset for slightly different reasons. “I’m shocked because I only found out the existing cafe was under threat last Saturday, quickly followed by the verdict on Tuesday. And upset because the cafe, flawed as it is, represents an authentic unpretentious shabbiness and character that big business thoughtlessly extinguishes with abandon. Far from perfect, it’s still a reflection of the people that frequent it. It saddens me that the Heath, supposedly a sanctuary from harsh urban realities, will now be an outpost for a corporate enterprise. The pizzas may be tasty and the interiors snazzy, but it’s a fake, soulless icon. The City of London makes a fast buck; the people lose the real value.”

We asked Benugo what it’s like facing so much local opposition with the contract already in place, and the takeover due in a matter of weeks? “We’re very mindful of local community, but we’re keen not to get too involved,” says head of marketing Sophie McCready, “especially at this early stage, by addressing something that may or may not be an issue for a large part of the wider community.

“Yet we’re delighted to have been asked to run this special and unique cafe. We have exciting plans, with a family menu built around fresh, local produce. We are mindful that this is an existing venue and sensitive to the fact that of course not everyone will agree with a decision to introduce new owners. However, we’re confident that most people in the local community will make their judgement when the new café is open for business.”

Reader Naomi Peck is incensed. “The committee decision was seven to six apparently and if they had consulted, they would have found out that people do not want another overpriced Benugo outpost with their lah-di-dah exorbitant approach. The son of Alberto, the proprietor, is setting up a petition that will be online and at the cafe. Benugo will be boycotted if the plans go ahead. SAY NO to BeNOGO!”

Not every reader is a fan of the current cafe, however. “In principle, I’d rather they gave it to a local independent cafe chain,” says Tim Sowula, “or even used it as a space for pop-ups or some thing. But I won’t shed a tear for the D’Aurias because that location, with that footfall and ‘customer profile’, and with zero competition, was just a license to print money and I think they got lazy. No innovation and poor service. Someone with passion for great food and drink and customer care could make a really great cafe there. Maybe Benugo can do it. I don’t know. But I don’t see why they shouldn’t be able to try.”

The main thing, concludes Johnston Stewart, is that “Hampstead Heath is not a high street. It’s not even a park. It operates in daylight not commercial hours. The D’Auria family are the hub of a close knit community which embraces all customers, muddy or otherwise, and at the drop of a hat produces anything from homemade aubergine parmigiana to a Kit Kat. What will a chain offer? Dough balls.”

What do you think about the takeover? Leave your thoughts below. A petition on Change.Org can be signed here.