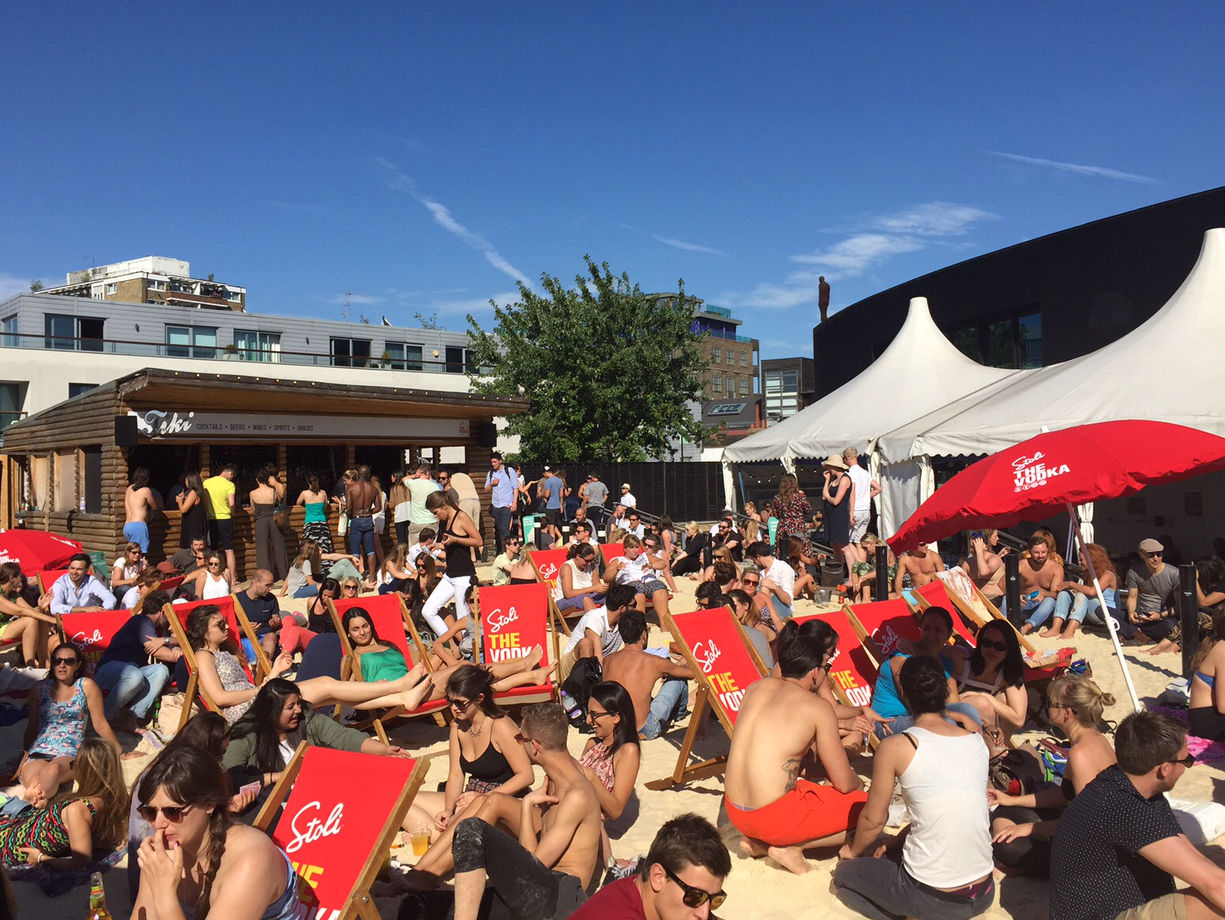 Been down the golden sands yet? Or, after all the hype, has “beach fatigue” finally set in this year?

While undeniably a unique neighbourhood addition, has it, we wondered, been a victim of its own success, with memories of endless queues, and sometimes infuriatingly sluggish service at the bar?

And is this compounded by the fact that there are now more urban beaches than ever across the capital, including these in north London and this one over east?

Hell, no! Or, at least, we hoped not. Anyway, a return visit was overdue; and, happily it coincided with rhe hottest afternoon since the beach opened back in mid July.

Arriving peak-hour mid-afternoon last Sunday, we were duly rewarded with zero queues anywhere, swanning straight in and onto the admittedly very crowded sands. With more bars on site than in previous years, the good news is there’s less of a scrum anywhere, with short, civilised waits at the main bar, and walk-up instant service at new ale and cider place Pork, pictured above. A rum shack on the northern fringes was deserted too – but then drinks there were a hefty £8 a pop.

Pint in hand, let’s look around. What’s new? Well, the whole beach feels smaller, for a start. That might be the looming presence of the new container park that now houses the Roundhouse offices. And those rooftop gardens (which contain a plunge pool), were unoccupied and closed off – as they were on our visits last year. Surely it would make better economic sense to let everyone enjoy them, perhaps for a modest entrance fee, when not booked out by private parties?

Other than that, it’s a ball: people-watching heaven, in fact, from the plethora of minor TV stars lounging in the four hireable beach huts mingling to excitable hordes of tattooed twentysomethings necking prosecco and smoking fags.

The revised offer at main diner, Fishy Business, looked delicious, with tuna, coley and plaice chalked up on the wall of a far more relaxed environment than previous years: now you just order at the counter and grab a seat, rather than having to book a pesky table upfront.

So any fears that our local resort is about to disappear like quicksand are happily unfounded. But it’s hedonism – rather than family fun – all the way on NW1’s original playa.

This is box title
Camden Beach at the Roundhouse, Chalk Farm Road NW1, is open daily until Sunday 23rd August, generally from 5pm (Wed-Sun 12midday) until 11pm. Admission is free.